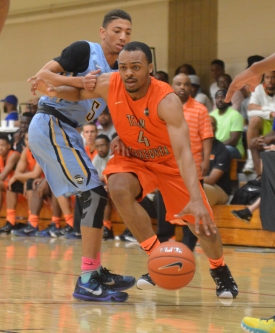 (Editor's Note: Our original story from last night has been corrected and updated.)

To say Nehemiah “Bud” Mack has endured a whirlwind couple of weeks would be a mighty, mighty large understatement.

Things have certainly come together quickly for the 18-year-old Harrisburg native, who landed at Baltimore’s Mount Zion Prep little more than a week ago.

And earlier Saturday — at his home in suburban Harrisburg and with plenty of family members nearby — Mack took another sizable step up his basketball ladder by committing to Manhattan of the Metro Atlantic Athletic Conference.

The 6-1 Mack, who scored nearly 1,200 career points during a splendid three-season run at Susquehanna Twp. that included an overtime loss to Neumann-Goretti in the 2014 Class AAA championship game, visited Manhattan in late August.

“Just the structure there and the coaching staff,” Mack said of his reasons for committing to a Manhattan program that’s made two consecutive appearances in the NCAA Tournament. “It’s actually similar to Takeover.

“What I’ve heard about Coach Mas, is he has a great reputation,” Mack added, referring to Jaspers head coach and Rick Pitino protégé Steve Masiello.

Manhattan’s attack-minded style — at both ends of the basketball floor — should fit Mack’s on-court approach. Not only is he a capable on-ball defender, but he’s also a player who likes to use dribble penetration to attack the rim.

Plus, he’s a terrific shooter from beyond the 3-point arc.

“I’ve been in that type of system in AAU and at Mount Zion, where I’m at now in Baltimore,” said Mack, who spent the past two years for Washington-based Team Takeover, which competes in Nike’s EYBL. “It plays in my favor a lot.”

By the way, Takeover head coach Keith Stevens played a major role in Mack landing in Baltimore at Mount Zion.

Since Mack’s relocation to Baltimore only took place a week or so ago, he’s been playing catch-up while trying to prepare for Mount Zion’s rapidly approaching season opener. Guard Caesar DeJesus, who spent last season playing for the prep school team at York’s Impact Academy, also is part of the Mount Zion roster.

“Actually, I was talking to the assistant coach [at Manhattan],” Mack said. “They wanted me to go to a school that would just prepare me for college and what I’ll be up against. [A few weeks ago] I didn’t know what was gonna happen.

“I basically just let God do it and I found Mount Zion,” added Mack, who finalized his decision to verbally commit on Friday. “It pushes you a lot. It’s real structured and they have a great program there.”

Yet despite being caught in a virtual tornado the past few weeks — after a lengthy spell of uncertainty — Mack now finds himself remarkably calm.

While plenty has happened and it’s happened remarkably quickly, finding a prep school to play at and finalizing his college plans have him at peace.

“A lot of pressure goes off the shoulders,” Mack confirmed. “It makes me feel like I’m back in middle school, just playing to have fun. Now I’m not worried about what schools take you and offer you and different stuff like that.

“A lot of kids have that pressure on them, about wanting to go to a good school and they don’t get that school at all. It’s just a good feeling [to have it all done].”