A-10 not sleeping on Davidson second time around 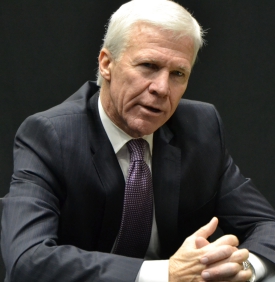 Davidson coach Bob McKillop (above) led his Wildcats to an A-10 regular-season title in their first year in the league. (Photo: Madeline Pryor/CoBL)

Last year, the various coaches in the Atlantic 10 voted newcomer Davidson to finish in 12th place.

They should have known better, as a team that had 20-plus wins in seven of its previous nine seasons didn’t miss a beat.

Davidson soared to a 24-8 record and 14-4 mark in the A-10, winning the league’s regular-season crown and securing its first ever at-large bid to the NCAA Tournament in school history.

As other coaches plan how to prevent Davidson from finishing atop the standings once again, Wildcats head coach Bob McKillop isn’t thinking about settling any time soon.

“We are picked higher [than last year],” he said; the Wildcats were picked third in this year’s preseason poll. “And all that selection means is just as an affirmation about what we did last year, it has nothing to do with what we hope we can do this year.”

There certainly won’t be any sleeping on Davidson this year.

And even though they lost the defending A-10 Player of the Year, Tyler Kalinoski, nobody’s thinking things will get any easier when facing the Wildcats and McKillop’s dangerous offensive attack.

“We’ve thought about them the whole off season,” Richmond coach Chris Mooney said. “I think the biggest thing is when they’re running well in transition, they’re almost impossible to defend.”

Saint Joseph’s, one of only four in-conference teams to take down the Wildcats, defeated Davidson 75-70 in an all-out battle last January. It took a yeoman effort from DeAndre Bembry, who led SJU with 21 points and a career-high 17 rebounds, plus seven assists.

“We were getting clobbered at halftime,” he said. “The players deserve all the credit because they responded…and we made a little bit of an adjustment. We look at that as ‘we have an opportunity to compete.’”

However, the Hawks won’t be depending on that game alone, nor the preseason rankings, to determine the outcome of this year’s match up.

“Sitting in seventh [in the preseason polls] we look at, who’re the teams ahead of us?” Martelli said. “We won’t hang our hat on the fact that we beat the defending regular season champs, that’s not the way we think.”

La Salle, which lost to the Wildcats once during the regular season and again in the A-10 tournament, is preparing for a better outcome against Davidson and overall this season.

Explorers head coach John Giannini compared the first game, a 77-69 home loss, to that of a “meat grinder.” Losses such as that one, he added, is where the team could have done better in its 17-16 year.

“We didn’t win those tough, grind-it-out games and that’s where our season didn’t go the way we wanted,” he said. “That’s the difference between 17 wins and 20 plus.”

As far as Davidson’s own preseason preparations, McKillop has his team working on its endurance in order to stay ahead. After struggling last year with a tough schedule both on and off the court, McKillop said “it conditioned our guys to understand the value of stamina. So in the off season, we have spent a lot of time talking about sleep, nutrition, strength, and weights.”

There’s a lot of positivity surrounding Davidson’s program coming off of an NCAA Tournament appearance, but McKillop knows the competition is abundant within the A-10.

“The conference is wide open,” said McKillop, who’s in his 27th year at the school. “The mark of any great program is to be consistent and we’ve had one year in the Atlantic 10, so in no way have we earned that right or opportunity to be the ‘the hunted.’ We’ve got a long, long way to go.”