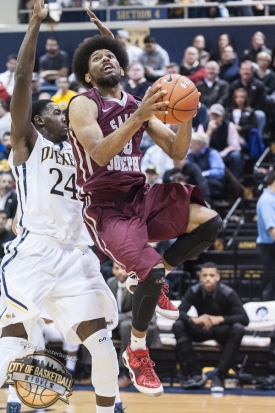 DeAndre Bemby (above) and Saint Joseph's could make a move up the A-10 standings. (Photo: Tug Haines/CoBL

Despite having several of its top programs poached by the high-majors a few years back, the Atlantic 10 has proven that it's still one of the top basketball-only conferences in the country.

No fewer than half of the conference's 14 teams have legitimate NCAA hopes entering the season, and it would be surprising if the league didn't send more than the three teams that went dancing a year ago.

Here is CoBL’s look at the Atlantic 10; to see the league through the eyes of several league assistants, click here:

Outlook: The Rams’ 13 conference wins last season were their most in more than a decade, and as scary as it sounds for the rest of the league, Hurley’s best players--Matthews and Martin--are still only juniors, and Terrell just a sophomore. Then add to the mix Iverson--a 6-8 junior and former top-100 recruit--as well as as McGlynn, a sharpshooting guard from Towson, and the potential is there for Rhody’s first NCAA Tournament appearance since 1999. Chemistry will play a large role in their success, but on paper this is the most talented starting group in the league.

Outlook: Despite losing Kalinoski, the defending Atlantic 10 Player of the Year, the Wildcats are still looking plenty strong heading into their second year in the league. Despite moving up from the Southern Conference to the A-10, McKillop still had his team running the eighth most efficient offense in the country, with Gibbs (42.5 percent) leading a team that hit 39 percent from beyond the arc. Sophomore forward Peyton Aldridge could be in for a big leap in production after averaging 9.4 ppg and 5.1 rpg as a freshman.

Outlook: Injuries and suspensions limited the Flyers to just six scholarship players and walk-on Bobby Wehrli for the majority of last season, but that didn’t stop them from putting together yet another 25-win season and a few wins during the NCAA Tournament to boot. Now Pierre is suspended for the first half of the season due to off-the-court legal issues, but if any team is likely to survive his absence, it’s Dayton. Cooke, who’s now eligible after arriving from James Madison last summer, adds more size and versatility to the perimeter at 6-5 and will be an impact player in the A-10 after two solid years in the CAA. A third straight NCAA Tournament appearance is expected.

Outlook: Despite being in the top 100 in both offensive and defensive efficiency last year, George Washington didn’t have quite the year that was expected of a team picked second in the league. The addition of Cavanaugh, a 6-9 forward who averaged 8.8 ppg as a sophomore at Wake two years ago, alongside the 6-10 Larsen in the frontcourt as well as 6-8 sophomore Yuta Wantanabe (7.4 ppg, 3.5 rpg), gives the Colonels one of the best forward groups in the league. If Mitola, a 5-11 guard who averaged 11.8 ppg and shot 39.0 percent from 3-point range in three years at Dartmouth, can find a way to get shots in the A-10, G.W. could be as good as they were supposed to have been a year ago.

Outlook: After leading the team in rebounds, assists, and steals, and leading the A-10 in points, Bembry is greeted with essentially the same Hawks roster from last year, with Wilson being the only significant loss. Miles looks to improve on his solid season from last year, and James Demery and Shavar Newkirk will continue to fulfill bigger roles in the team as they enter their sophomore season. A pair of local first-year Hawks, Clover (St. Joe’s Prep) and Kimble (Neumann-Goretti) add depth to the guard position for the Hawks, while Lodge exits his redshirt year looking to make an instant impact on this rising Hawk team. The Hawks are on the upward slope of their rebuild journey.

Outlook: First-year coach Will Wade has big shoes to fill after coming over from Chattanooga to replace Shaka Smart, now at Texas. Last year’s A-10 Champions are missing the team’s leading scorer, Treveon Graham, and will need new faces to step up if they want to eclipse last year’s success. Luckily for them, the backcourt combo of Melvin Johnson and JeQuan Lewis return and will handle most of the ball-handling duties. Johnson was the team’s second leading scorer last season and, as one of the team’s two seniors, he will most likely assume a more active role in the team’s offense. Freshman big man, Jonathan Nwankwo, will look to make an instant impact with a presence in the paint and will be reunited with fellow Victory Rock Prep alum Jordan Riullano in the backcourt.

Outlook: The Dukes have slowly increased their conference win total under Ferry from one in his first season to six last year, and with Castro, a Butler transfer, joining the established backcourt duo of Colter and Mason--Duquesne’s two leading scorers from a year ago--the thinking is the team will take another step forward this season. Where they’ll need to improve is on the defensive end, where they were 322nd in the nation in defensive efficiency (1.11 ppp); otherwise, they won’t survive in a league full of teams who can get the occasional stop. 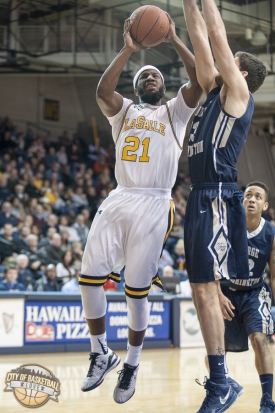 Jordan Price (above) and the Explorers are dealing the with the graduations of their starting frontcourt. (Photo: Tug Haines/CoBL)

Outlook: Last season, Posley was the new guy and the A-10 didn’t know quite what to expect from the JUCO transfer. Those questions were answered and now, entering his second year for the Bonnies, Posley has established himself not only as a constant scoring threat, but as a legitimate All-Conference Team member candidate. He and teammates Wright and Adams, return after a solid run in the A-10 Tournament. Ndoye’s rebounding will be missed, but the Bonnies hope to fill that hole with a pair of freshman forwards in Woods and Griffin. St. Bonaventure lost by only four points to Dayton in the quarterfinals last season, so as long as they can adjust to the loss of the one of the best big men in the league, the Bonnies should be in the upper half of the A-10.

Outlook: There’s a lot of talent on La Salle’s roster--unfortunately quite a good deal of it is sitting out the year due to transfer regulations, as B.J. Johnson (Syracuse), Demetrius Henry (South Carolina) and Pookie Powell (Memphis) will all be dressing up next season. The Explorers have to replace a veteran, talented frontcourt in Zack and Wright that combined for over 2,100 points and nearly 1,700 rebounds in their four years with a senior, Rohan Brown, who’s never played more than 10 minutes per game and a redshirt sophomore, Tony Washington, who averaged 0.5 ppg and 0.5 rpg a year ago. Jordan can flat-out score the ball, but a lot of things have to go right for these guys to make a move up in the standings.

Outlook: Last season was not one for the memory for the Billikens finishing dead last in the conference, but after graduating only two players who played 10 or more minutes, the Billikens enter 2015-2016 with a roster that in theory should only improve. Yarbrough and Yacoubou are both back after finishing first and second on the team in both points and rebounds last season. A trio of freshman will take on significant roles almost immediately for this St. Louis team, that is in search for a true standout player. Last season, more players entered games in starting roles than didn’t (12-2) and not a single player started every game. A young roster should only bring hope to the Billikens future and lucky for them they can only get better.

Outlook: Three of the five starters from last year’s UMass team have graduated or transferred, leaving UMass in a major transition period. Lalanne led the team in points and rebounds, and Esho was ranked second in both categories leaving the team in search of replacements for the future. Luckily, the team’s leading playmaker, Trey Davis, returns ensuring the team is not entirely without experienced starters. Freshman forward Hines, and freshman center Holloway will try to fill the rebounding gap left behind and Pipkins, a freshman guard, will be in charged with a significant role in on offense to compliment Davis’ mix of scoring and playmaking. This might be a down year for UMass, but with a fantastic 2016 recruiting class on the horizon, that dip won’t last long.

Outlook: Former head coach Paul Hewitt couldn’t quite manage the Patriots’ transition from the CAA to the Atlantic 10, winning a combined 20 games total in his first two years in the league. In his stead is Paulsen, who won 25-plus games three times in seven seasons at Bucknell and took the Bison to two NCAA Tournaments. His roster isn’t empty, with Thompson likely the best big man in the league and two capable scorers in Holloway and Moore plus talented junior Jalen Jenkins, but what’s not clear is if they’ll fit the way he wants to play. Paulsen very well might be the coach to bring the Patriots back to glory, but it’s probably not going to happen right away.

Outlook: There’s no doubt that Fordham is the toughest job in the Atlantic 10--only one Rams team since 1992 has had a .500 record, and they’ve had almost as many single-digit win seasons as double-digit ones during that time. The latest candidate to try to generate momentum is Neubauer, a La Salle grad who averaged more than 18 wins in 10 seasons at Eastern Kentucky. It’ll be interesting to see if he can get anything out of Jon Severe, a former top-150 prospect who averaged 17.3 ppg as a freshman but only 6.7 ppg in a sophomore year that can only be described as “rocky.”