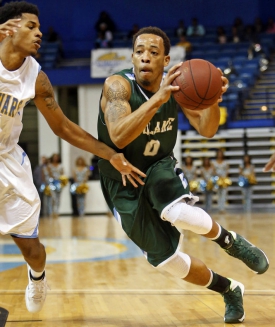 Tulane senior Louis Dabney (above) has seven new faces around him on the Green Wave's roster. (Photo: Brett Duke/NOLA.com)

Over the past 15 months, the Tulane basketball team experienced a lot of transition, some not directly attributed to the hardwood.

In July 2014, the Green Wave officially joined the American Athletic Conference, coming over from Conference USA with former members Tulsa and East Carolina. In their inaugural season in the AAC, the Green Wave finished with a 15-16 overall record, 6-12 in the conference.

They lost to the Houston Cougars in the first round of the AAC Tournament, and then lost to graduation guards Jay Hook and Jonathan Stark, both of whom averaged in double figures.

While it could have been seen as a disappointing season, senior guard Louis Dabney saw last year as an opportunity to get a feel for what to expect every season from now on.

“What I did learn is it’s a lot tougher obviously but just different types of schemes and bigger teams,” said Dabney, who 30 games and averaged 13.6 ppg as a junior. “Being in this conference, it makes you have to be a complete player, not only scoring but taking [your] game to another level.”

Dabney comes into this season as the lone senior who will have to lead a new Green Wave team that welcomes seven newcomers: five freshmen, a redshirt junior in Malik Morgan and a graduate student in Jernard Jerraru.

Morgan played two seasons at LSU where he appeared in 52 games and scored 255 points. He decided to choose Tulane because of the close bond and relationship he has with head coach Ed Conroy.

“He’s always kept me in his corner, and I’ve always kept him in mine. He would always talk to my family even when I went out to LSU,” Morgan said of Conroy, who is entering his sixth season as coach of the Green Wave. “When I finally transferred, we continued to talk on the same level and it was like we never skipped a beat in our conversations.”

While it may be a completely revamped roster, Morgan feels a certain excitement about having such a young and hungry group.

“The freshmen have been working hard all summer just like I have. They’re real eager,” said Morgan, who hasn’t played since February 2014 when he suffered a season-ending knee injury. “Everybody has been working hard and everyone is excited. I think we all have the same amount of anticipation.”

Frazier, a 6-foot-5 guard who was rated as a 4-star recruit and the No. 3 prospect in Louisiana by ESPN.com coming out of high school, said he chose Tulane because “they stayed on [him]” even after several high-major programs backed off in their recruitment of him.

Frazier feels indebted to Conroy and the Green Wave, and wants to begin to build a culture of success with his new teammates.

“It’s very important. Our freshman class has some good players. We got to do what we got to do,” Frazier said. “We have to win some games. We’ve been talking about it almost every day. Von [Julien] has been leading [those discussions] for the freshmen and Lou Dabney for the older guys and [also] Coach Conroy.”

Both Morgan and Dabney have liked what they’ve seen from this freshmen core so far.

“They’re really coming along nicely. Kain Harris is really athletic and a very skilled guard. Von [Julien] is really skilled as well,” Morgan said. “Taron and Blake do their work down low. I think they’re all coming together nicely, and I think they understand what we expect of them.”

““I think it’s been pretty hard for them but I think they’re adjusting really good,” Dabney said. “I think one that’s standing out to me is Von Julien. I think he’s ahead of all the other freshman on concepts with the way he’s playing and the way he’s moving the ball.”

Julien, who was ranked as the 51st-best point guard in the nation by ESPN.com, has been getting high praise from several of his new teammates. He may be thrust into the starting point guard role when the Green Wave tip off their season at home against Alabama A&M.

“I think with us adding so much height our rebounding has to take a big jump and, with the players we have now, I think that’s a big part of us just winning games and not losing games at the end like last year,” Dabney said.

Even though Tulane has not made the NCAA Tournament since 1995, Dabney and Morgan are looking at the increased competition of the AAC as a way to improve themselves and the program as a whole in year two.

“First and foremost, win. I feel like this year we match up well height-wise. I feel like last year we were right there competing with everybody,” Dabney said. “I think this year with the players that we picked up, we can take that next step and be a top team in this conference.”

“I want to be able to go undefeated. I want to win a conference tournament and a national championship,” Morgan said. “We all kind of have the same goals and aspirations. We’ll definitely be a force to be reckoned with.”