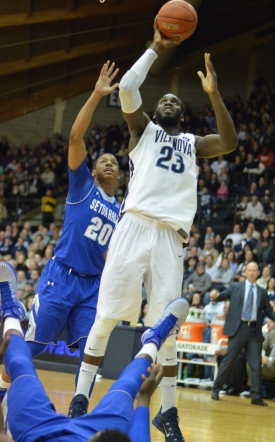 Daniel Ochefu (above) is in the best shape of his life after a summer training with "Crazy Frank" Matrisciano. (Photo: Josh Verlin/CoBL)

Daniel Ochefu spent part of his summer working out in San Francisco under a trainer he knew best by nickname.

“Crazy Frank” is also known as Frank Matrisciano, a notorious instructor who has worked with some of the best players in the NBA including Blake Griffin and Zach Randolph. Matrisciano pushes players to the max both physically and mentally, and Ochefu feels like he got his body and mind right working with him prior to his senior season at Villanova.

“He’s crazy, but he’s a great guy,” Ochefu said. “He definitely has some extreme viewpoints, but he sticks with them and they work. He says he’s a life coach, but he works more on the physical aspect.”

With the training of Crazy Frank under his belt, Ochefu is back for his final season with the Wildcats as the team’s go-to post presence.

The 6-foot-11, 245-pound forward had a junior season in which he established himself as a capable forward on both ends. Ochefu averaged 9.2 points per game on a Big East best 64.4 percent shooting. He also was third in the conference with 8.5 rebounds per game and blocked 50 shots.

He was named the Big Five’s most improved player and was an honorable mention All-Big East selection. And the accolades trickled into this season as Ochefu was placed on the preseason All-Big East second team, which was released Wednesday.

On a team and in a program known for its guard play, Ochefu has become one of the best big men in the conference and a potential NBA player.

“Having a guy like Daniel is rare for us,” Villanova coach Jay Wright said. “The more people label us ‘Guard U’ the tougher it is for us to get guys like Daniel. But as we all know, to win big, you need a big guy.”

Ochefu was flanked by fellow senior Ryan Arcidiacono at Madison Square Garden to talk with reporters. Both spoke of how it was hard to believe they were entering their last seasons at Villanova, and therefore their last chances to chase a national title.

Wright is leaning on the duo to lead, and from the way he sounded, they’re doing so by example at practice.

“(Former Villanova standout) Kyle Lowry was the most competitive guy we’ve ever coached, but these two are on that level,” Wright said. “Daniel, believe it or not, even more so. If he has a weakness, it’s over competitiveness, sometimes in practice, too. Sometimes we’ll be doing a drill and he’s more worried about winning or losing the drill rather than what we’re teaching. Kyle Lowry was the same way.”

Ochefu should have more opportunities to show off that competitiveness in games this season. The Wildcats lost 6-7 JayVaughn Pinkston to graduation from last season, and Ochefu is the only traditional big man to return with a lot of action. He averaged 24 minutes per game last season, and that number will likely increase during this campaign.

Small forward Kris Jenkins will have an important role on this Villanova team and 6-8 junior Darryl Reynolds will be the primary big behind Ochefu. Villanova is down a bit in the frontcourt depth department after freshman Tim Delaney torn his labrum early in practice, and after undergoing surgery he's out indefinitely.

Ochefu, though, sounds like he is ready for more time thanks in part to the work with Matrisciano.

“I feel like I’m able to now play longer and be on the floor for extended periods of time,” he said.