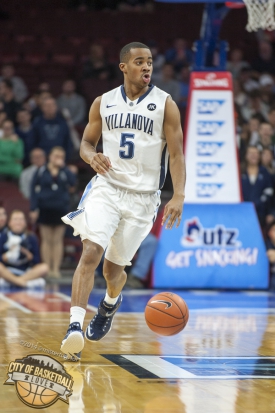 Phil Booth (above) is one of three point guards Jay Wright all start together this season. (Photo: Tug Haines/CoBL)

Just as John Calipari is known for embracing the use of “one-and-dones” at Kentucky and Tony Bennett's Virginia teams are known for his signature “Pack-Line” defense, it’s no secret that Villanova has become notorious for it’s elite guard play under the guidance of head coach Jay Wright.

This year, however, Wright's signature has led him to what is admittedly an enviable challenge: how to juggle minutes between three lead guards who could each waltz into starting spots for all but a handful of Division I teams.

First there’s sophomore Phil Booth, who looks primed for a breakout year after averaging 5.8 points on blistering shooting numbers (56.3 percent FG, 48.5 percent 3FG) while playing limited minutes behind Darrun Hilliard and Dylan Ennis. With Hilliard competing for an NBA roster spot with the Detroit Pistons and Ennis having transferred to Oregon, the opportunity is there for Booth to double his 14.5 minutes from a year ago.

Then there’s freshman sensation Jalen Brunson, whose mature floor game and 3-point shooting ability had him considered by many to be the top point guard recruit in the 2015 class--and that was before he led Team USA to the FIBA U19 World Championship, capturing MVP honors with averages of 14 points and 5.6 assists per game.

And of course there’s defending co-Big East Player of the Year Ryan Arcidiacono, a returning three-year starter and the heart of the Wildcats squad who has become a fan favorite for his hard-nosed play and his propensity for coming up big in clutch moments.

While it might be tough for Wright to balance having three players with such overlapping styles, it’s a dilemma many of his counterparts around the country would surely love to have.

“I would like to take credit for that, but we really do it out of necessity,” Wright said of his team’s backcourt depth. “We look at guys who fit our Villanova culture, what kind of basketball players they are, we’re not really worried about position.

The biggest question many Villanova fans have right now is who will comprise the team’s starting five when it takes the court against Fairleigh Dickinson on November 13th, with Brunson’s international play leading many to believe he may just be too good to deny a starting spot from jump street.

Arcidiacono, senior center Daniel Ochefu, and returning Big East Sixth Man of the Year Josh Hart have their spots solidified, with the question being whether Wright will also trot out both Booth and Brunson to form a four-guard lineup reminiscent of his 2005-06 Elite Eight team.

He certainly wouldn’t rule out the possibility at Big East Media Day in New York, although he did say that the lineup is far from set in stone at this point.

“We don’t get into positions, and I think that helps,” Wright said at Madison Square Garden. “We don’t really label guys point guards, 2-guards, 3-guards and that is why we can play multiple point guards. One year we started Randy Foye, Kyle Lowry, Allan Ray and Mike Nardi, and all four of them play professionally, at some point in their career, as point guards.”

Wright is clearly not against the idea of starting a true freshman in the backcourt, with Arcidiacono having walked into a starting spot out of Neshaminy High School just three seasons ago.

But if Brunson is in fact going to start, he’s surely to going to have to earn it, as McDonald’s All-American honors don’t guarantee anything at the next level.

According to the Wildcats’ senior leader, who goes against his younger teammate on a daily basis in practice, the Stevenson High School (Ill.) product won’t have a problem meeting the expectations that come along with being such a highly-regarded recruit.

“Jalen has a lot of expectations, but I think he can live up to them as long as he does the little things for us,” Arcidiacono said. “Him being able to come in and play the point guard position and do many things, give a lot of versatility gives another asset to our team overall. He can really score the ball, he sees the play before it happens.”

“Really the greatest asset that Jalen has is that he is an old soul. He comes in like an experienced player,” Wright added. “If he started, it’s not because he’s a highly touted freshman, it’s because he’s experienced and he’s so refined.”

Regardless of who starts and who comes off the bench, all three of Arcidiacono, Booth, and Brunson will surely see big minutes, with the latter two replacing the departed Hilliard and Ennis in ‘Nova’s potent pace-and-space offensive attack.

With each having the ability to bring the ball up the court and run the offense, one might worry about chemistry problems stemming from the Wildcat guards stepping on each other’s toes.

But this team goes as Arcidiacono goes, and with him setting a tone of unselfishness, it would be silly to expect his burgeoning young teammates to do anything but follow suit.

“It’s been real flexible in practice,” Arcidiacono said. “There are no set positions where it’s ‘Arch bring it up, Jalen bring it up, Phil bring it up’ if we’re in the game together. Whoever gets it, he’ll be the guy for that possession.”