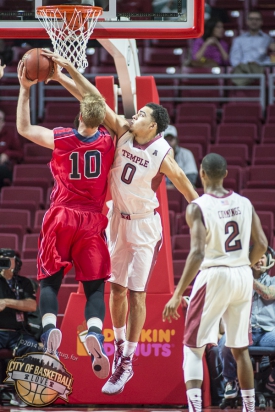 At 6-foot-9 and 220 pounds with a mobile, athletic frame and scoring range out to the 3-point arc, Temple sophomore Obi Enechionyia is developing into a real problem for opposing teams to guard.

As a freshman last season, Enechionyia made his mark as one of the best defenders on the Owls, capable of guarding wings and forwards alike. Most impressively, he became the top shot-blocker on a team that featured a junior center (Devontae Watson) with a 7-6 wingspan who reportedly blocked over 1,000 shots in his high school career.

His 45 blocks were tied for fifth-best in the American Athletic Conference, and top 20 amongst all freshmen nationally.

“It just comes with length and athleticism, really,” he said at practice last week. “You have those and coordination, you can be a good shot blocker--it’s not practice, it just comes naturally.”

Natural talent is something that Enechionyia has in spades.

That’s obvious when he rises up with his head nearly above the rim to block a shot or throw down a dunk--and as much as he likes blocking shots, just like for most young players it can’t quite compare to that rim-rattling feeling.

“A dunk is probably my favorite,” he said, “but (blocks are) a close second.”

The Springfield, Va. native improved throughout his freshman season (5.3 ppg, 3.6 rpg), saving his best for last with a 17-point, eight-rebound, five-block effort against Miami (Fl.) in the NIT semifinals, under the bright lights at Madison Square Garden.

“He had a really good end of his freshman year and now the pressure’s on,” Temple head coach Fran Dunphy said. “Can he take that into his sophomore year and really step up to the next level...I’m hoping that he can.”

Though Enechionyia’s face-up ability is something that Dunphy pointed out can make him a real problem for opposing forwards to guard, Enechionyia is focused on improving his ability to score on the block.

Both player and coach agree that he needs to become a stronger rebounder and interior force to help his team the most this season.

“Probably the biggest difference I made this offseason from last year is just playing down low,” he said. “I did a lot of post work this year to get ready for the season, and I didn’t do a lot of that last year. I did work on everything, but I kind of emphasized post work.”

“He’s very valuable to us on the defensive end,” Dunphy added. “He can change some shots and block some shots, now he has to be a really solid rebounder...he also needs to help us with some inside play as well.”

But if any of that group is going to make a big improvement in their production numbers, it’s Enechionyia, who should be an all-league candidate the next few years.

“I feel that he’ll show that a lot more this year at both ends of the court, he will be good for us,” Bond said. “He is going to help protect the rim and give us some impact on offense.”