TU seniors hungry to get back to NCAA Tournament 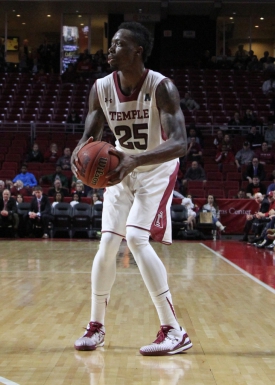 Temple senior Quenton DeCosey (above) got a taste of the NCAA Tournament as a freshman. (Photo: Josh Einbinder-Schatz/CoBL)

Following a bounce-back season in 2014-15 after a miserable experience the year before, Temple fell just short of making their 32nd NCAA Tournament.

Literally just short--Temple was the first team left out as an at-large selection; one extra win during the year and they're likely dancing.

To make sure that they hear their names called on Selection Sunday this March, the Owls' men's basketball team will look to take a page out of the book of the school’s football program, which uses the slogan “Leave No Doubt.”

That message is not lost on the basketball program’s seniors, who are going into the 2015 season with a chip on their shoulder, looking to not leave their postseason chances in the hands of the committee.

“We were snubbed last year,” said Quenton DeCosey, one of four seniors on the Owls’ roster. “It definitely hurt us and we just want to get back and prove that we deserve to be in the tournament...I definitely think that we should have been it in, 20-plus wins, we had a great season, and unfortunately they didn’t pick us. We are just working hard now to get back there.”

DeCosey is one of four players on the Temple roster to have ever been a part of a team that made the NCAA tournament. Fellow senior, Devontae Watson and redshirt junior Daniel Dingle were on the Owls’ roster when the team came within six points of upsetting first seeded Indiana in the Round of 32 of the 2013 tournament. Senior Jaylen Bond was a freshman at Texas when they lost to Arizona in the second round of the 2012 tournament; he transferred to Temple a year later.

All four of them were freshmen at the time that their teams appeared in the tournament, and none of them saw any playing time during the tournament.

“It is definitely one of the motivating factors coming into this year,” Bond said. “Coming so close last year and not hearing our names called was very disappointing, but our job is to get better during the offseason, so you try to just focus on that.”

The last senior, Devin Coleman, transferred to Temple after spending two seasons at Clemson, where he never made a NCAA Tournament, but his experience adds to the plethora of depth that the Owls have going in their favor.

Everything points toward Bond and DeCosey to have to really take an ownership stake in leading this team if they are to make it back to the tournament. DeCosey finished second in every major statistical category for the Owls last season, finishing with 12.3 ppg, 4.6 rpg and 2.2 apg. Bond led the team in rebounding, with 7.9 rpg to go along with 7.6 ppg.

“The goal every year is to get to the tournament,” Temple coach Fran Dunphy said. “We talked about it last year, about how difficult it was that we did not get in it, we probably needed to win one more game, the reality was we probably needed to make one better play...well we didn’t, and we have to live with that and hopefully that is motivation enough for these guys that we were so close and it didn’t happen for us.”

With so much of a team’s tournament resume being based on their strength of schedule and the quality of their wins, Temple has a shining chance to make a statement with plenty of difficult non-conference games.

The season opens in the Veterans Classic played in Annapolis, Md. against presumptive top-five North Carolina. From there the Owls will travel south to participate in the Puerto Rico Tip-Off Tournament, where they will play their first match against Minnesota. In addition to the always challenging Big Five opponents, Temple will also play national championship runner-up Wisconsin on the road.

With so many high-profile games for the Owls, notching a few signature non-conference wins has never been more important for a team striving to make another tournament appearance.

“I try to tell these guys, you have to come in and be the same people every day,” Bond said. “The same hard working team every day, if you want to reach that goal and make the tournament, it’s going to take everybody, that is our goal.”