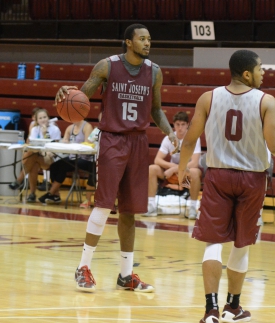 A slimmed-down Isaiah Miles (above) leads a much deeper SJU frontcourt in 2015-16. (Photo: Josh Verlin/CoBL)

Senior Isaiah Miles admits there were times last season he took plays off.

It was the first time in his career playing extended minutes for St. Joe’s, and at 234 pounds Miles knew at the end of the season his conditioning would need some work heading into his senior campaign.

“Last year I played the most minutes of my whole career here so just I learned a lot through the season,” Miles said. “I just ran everyday and I ate right and ate healthy, I didn’t put any kind of junk food in my body. It’s my senior year so I’m going to play every play like it’s my last.”

Miles’ offseason regimen of eating right and exercising regularly paid dividends, as the 6-foot-7 forward has slimmed down to 215 pounds.

Last season Miles was second on the team in both scoring and rebounding, putting up 10.7 points per game and grabbing 5.1 rebounds per contest. He averaged the third-most minutes on the Hawks seeing the court for 31.3 minutes per game, and his 35.3 percent clip from beyond the arc ranked first on the team.

Weight loss and improved conditioning will be especially crucial for Miles this season, as he expects one of the trademarks of the Hawks’ frontcourt to be running the court this season.

“Me, Markell [Lodge] and Papa [Ndao] are all around 6-7 so we’re all going to focus on running and spacing the floor,” Miles said. “We can get by those bigger bigs and there will be a lot of mismatches when we play.”

If head coach Phil Martelli does tend to go with a smaller lineup, it's unclear what that means for 6-9 redshirt junior center Javon Baumann, who averaged just over three points and three rebounds in 20 minutes per game last season despite starting the entire year.

After sitting out what would’ve been his freshman season last season to focus on academics, Lodge, an athletic freak, will return to the court this year hoping to provide further frontcourt depth. Lodge averaged 18 points and eight rebounds his senior season at Pace Academy in his hometown state of North Carolina.

“He’s a freak athlete - he dunks everything,” Miles said of Lodge. “I haven’t seen anyone jump higher than him since Ron [Roberts]. His athleticism is definitely a big deal because we didn’t have it last year.”

“I would say everybody crashing the boards, that’s the main thing,” Lodge added. “I think it’s going to be very good because we’ve got a quick team this year, and we’ve also got a talented team where we can press a lot, so it’s going to be a good year this year.”

Even though statistically Miles was the number two option last season, the senior believes that actually helped open the floor up for him.

When opposing teams formed gameplans to double-team Bembry, Miles said it created opportunities for him and teammates to put the ball in the basket.

“DeAndre’s a very good player, everyone’s going to be looking for him to do his thing,” Miles said. “That can be an upside too… it gives players like me and Aaron Brown chances to score because their defense is so focused on DeAndre.”

Head coach Phil Martelli credited Miles for his weight loss and will be looking to him to increase his offensive production this season. He has been pleased with the senior’s effort in practice thus far but stressed Miles needs to put up numbers consistently to keep his starting position.

The Hawks lacked a go-to scorer last season; only Miles and Bembry averaged double figures and collectively the team averaged 61.7 points per game, ranking 302nd in Division I.

“He’s more energetic that’s for sure, but I would say after the first week [of practice] statistically he needs to do more,” Martelli said. “He needs to post some numbers here because we are a team that struggles to score...not that he is, but there’s no coasting here. None of us can coast; let’s go, who’s going to earn it?”