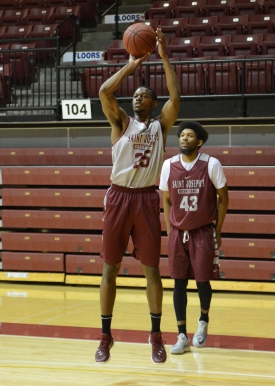 James Demery (above) is one of several Hawks who struggled shooting the ball last year. (Photo: Josh Verlin/CoBL)

Phil Martelli isn’t suddenly expecting his Hawks to shoot the lights out this season.

Last year, Saint Joseph’s was one of the worst teams in all of Division I basketball at draining from the 3-point arc and foul line, and weren’t so great on two-pointers either.

And the result was often ugly to watch -- the Hawks failed to crack the 60-point mark on a dozen occasions; for the year, St. Joe’s was 302nd in the country at 61.7 points per game. And the team’s 13-18 record was in many ways a reflection of its offensive woes, as its defense was actually one of the 100 most efficient in the country.

Instead, the Hawks’ head coach is banking not so much on efficiency, but on volume.

“We’re going to make heavy emphasis on we want to get a shot every time down,” Martelli said at practice last week. “If we’re going to shoot a little bit lower percentage--it’ll be higher than it was last year, but it’ll still be a lower percentage compared to the other teams in the Atlantic 10, if we can get more shots, I’m confident in this group and how things will play out for us.”

Turnovers weren’t as much of a problem as shooting last year, with St. Joe’s coughing it up on 19.2 percent of possessions (according to KenPom.com), putting them right in the middle nationally (185th). Compare that with their 3-point shooting (29.9 percent, 326th) and free-throw shooting (61.5 percent, 341st).

So it’s clear where the biggest improvement needs to happen; even shooting 34 percent from beyond the arc would put the Hawks in the top half of their conference, even if they’re not going to catch Davidson (39.4 percent) or George Washington (37.5 percent)

And this should certainly be a much more talented and deeper team than the one Martelli fielded last year, with potentially four impact freshmen and one senior who missed last year with health issues joining a core of six players who all got significant minutes last season. And yes, some of them can shoot.

They’re led, of course, by do-everything wing DeAndre Bembry, an All-American candidate who led his team in scoring (17.7 ppg), rebounding (7.7 rpg), assists (3.6) and a few other categories. But even Bembry needs to improve his 3-point shooting (32.7 percent), especially after making nearly 35 percent as a freshman.

Much more crucial, though, would be improvements from his supporting cast.

The Hawks’ best returning shooter is 6-8 senior forward Isaiah Miles, who made just over 35 percent of his triples a year ago on 150 attempts.

“He’s the best returning 3-point shooter in the frontcourt in the whole league and people don’t know about that, they just say our team can’t shoot,” Martelli said. “Well he can, so we need him to post numbers.”

Beyond Miles, things got rough, with sophomore wing James Demery (7-for-40, 17.5 percent), sophomore guard Shavar Newkirk (6-for-32, 18.8 percent) and senior wing Aaron Brown (8-for-28, 28.6 percent) all really struggling from 3-point range. The only graduate from last year was point guard Chris Wilson, who was third on the team in 3-point attempts (136) but only made 30.1 percent of them.

If there’s going to be improvement, it’ll likely have to come from those who weren’t on the team last year. Of the four freshmen on the Hawks’ roster this year, three have proven themselves capable perimeter shooters at the high school level.

Philly natives Lamarr Kimble (Neumann-Goretti) and Chris Clover (St. Joseph’s Prep) weren’t known as knockdown shooters in the Catholic League, but both of them should be able to hit somewhere in the 33 percent range as freshman. And their classmate, 6-8 Italian stretch forward Pierfrancesco “Checco” Oliva has the prettiest stroke of them all--even if, as Martelli noted, during early practices “the ball doesn’t go in as much for Cecco as you would think.”

Then add in Papa Ndao, who missed last season with an undisclosed health issue; the 6-8 senior forward made 40 percent of his 3-point attempts as a junior in 2013-14.

“All of those guys are going to play...so we do really have a fresh outlook with new bodies,” Martelli said. “As long as we can get a shot at the basket, as long as we don’t turn the ball over and we can play at the pace that we want to play at, I think our shooting woes will be a little bit minimized.”