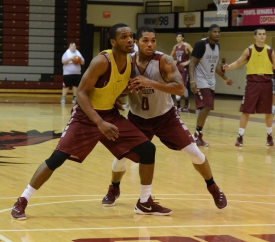 As two of the best guards in the city and Philadelphia Catholic League, Lamarr Kimble and Chris Clover saw a lot of each other in the past few years. That does not come close to comparing to the last few months, though.

Now freshman teammates at St. Joseph’s, the two local products are adjusting, learning and playing together as they try to help turn around a team that went 13-18 last season. They still matchup occasionally at practice, but, being in the same boat, the Neumann-Goretti and St. Joe’s Prep products quickly forged a friendship.

“Going from rivals to teammates, it’s a good situation,” said Kimble, who averaged 14.5 points per game in his senior season at Neumann-Goretti. “He’s a good, fun person, we’re together all the time. We match well and it’s great to be around him.”

Kimble, 6-foot, 197-pound guard, is a candidate to take some big minutes at point guard after the Hawks lost Chris Wilson to graduation. Clover, on the other hand, checks in at 6-3, 212 pounds and is coming off a senior season at St. Joe’s Prep where he averaged 20.7 points per game and was named the PCL’s MVP.

Only a couple of months into their Hawks careers, coach Phil Martelli has liked what he’s seen from the city duo, who are joined in the 2015 class by Italian/Bergen Catholic (N.J.) forward Pierfrancesco “Cecco” Oliva. And it’s not just because of what they’ve done on the court.

“They’re zeroed in,” Martelli said. “Sometimes when you have local kids, they can be distracted because their friends come to watch practice or they want to come to the dorm and hang out, or they want to run home for their girlfriend’s birthday and then they’re late for something. These two, they’re beyond their years and they’re both playing very well.”

What’s the biggest thing that would help them carve out a spot in the rotation as freshman? For Martelli, whose team was 307th in the country in scoring last season, the answer was not complicated.

“They’ve got to make baskets,” he said. “We’re a team that struggles to score, so if they make baskets it’s going to help. They have to continue the climb, if they at any point get stuck--which all freshmen do get stuck at some point--they’ve got to go beyond that. They just have to keep their eyes and ears open.”

Clover does have an advantage over a lot of players in their first year thanks to his physicality.

He is a lean 212 pounds and could easily pass for a second- or third-year player in a team’s strength and conditioning program. “He’s built like a junior or senior. He’s huge – that’s a big guard that we need,” senior forward Isaiah Miles said.

Clover will try to use that size to his advantage, especially on the defensive side of the ball.

“I want to be a good teammate and make myself a better defender,” Clover said. “I know I can improve on defense, and I work on it each and every day and that is going to be one of the keys to get me on the floor.”

Working for the same respect of teammates and coaches, Kimble recalled his freshman year in high school, where he was in a similar position. In his first year at the south Philly powerhouse, he had to wait his turn behind other D-I athletes and prove he deserved to get on the court. Kimble said the experience has “made things easier” as a college freshman.

Kimble has a few personal goals for his freshman campaign, but the overarching accomplishment he wants is something he did a ton of at Neumann-Goretti -- winning. As a Saint, he won three Catholic League championships and three PIAA Class AAA titles, losing a total of 15 games in his four years of high school basketball.

“It’d be nice to be the A-10 Freshman of the Year or something like that, but I just want to win,” he said. “That’s everyone’s goal here, to have a different season than last year and turn it around. Everybody is working towards that.”