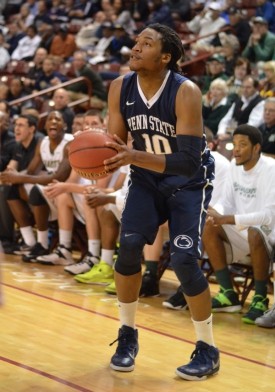 Penn State has made more headlines on the recruiting trail in the past two years than in any part of its basketball history, and Chambers’ first seriously head-turning class will take the floor as freshmen this season. The Nittany Lions’ 2016 class is shaping up to be even better, but even with the recruiting success, it’s still going to be a rebuilding year on the court in Happy Valley.

The Lions have to replace do-everything guard D.J. Newbill (the Strawberry Mansion graduate is now playing professionally in France), who was the brightest spot of a team that floundered to a 4-14 Big Ten record after a 12-1 start. The good news for Penn State fans is there is reason to be optimistic about the long-term future of Penn State, the bad news is this year’s team is still going to have to take some lumps – especially in Big Ten play.

One of the best scorers in Penn State history, Newbill was responsible for generating a lot of Penn State’s offense last season. Even with the attention of other defenses, he still posted more than 20 points per game and also chipped in three assists and nearly five rebounds every time out. Newbill did so much for the Lions, and his presence will be missed sorely by Penn State on the floor and in the locker room.

But Penn State will also feel the effects of not having Travis or Thorpe. Travis – who is now on the Kansas City Chiefs practice squad – never pieced together his offensive game, but was a terrific rebounder for all four of his seasons at Penn State. While Newbill and Travis graduated, Thorpe’s loss was an unexpected one. After his sophomore season, he announced he was transferring from the school in June. Thorpe was the team’s best perimeter defender and became more of an offensive threat last year, finishing fourth on the team in scoring.

Reaves and Watkins are the two big names of the class, and they’re expected to get significant time this season. Reaves, a 6-foot-4 shooting guard, finished at No. 74 in ESPN’s Top 100 of the class and is a lanky player that can make an impact on both sides of the floor. Thorpe’s departure opens more opportunity for Reaves offensively and defensively.

Watkins was tabbed as the 90th best player in the class by ESPN, and the 6-foot-8 big man will also have his chances to see how he measures up at the collegiate level and in the Big Ten. Watkins, a Philly native, could turn into one of the most prominent big men Penn State has seen in some time. Watkins said he enjoys blocking shots and playing defense and he also is good on the glass – which will get him on the floor under Chambers. Zemgulis, a Lithuanian player who spent two years of high school in Maryland, is viewed as a sniper from beyond the arc. If he can be reliable for Penn State from deep, he’ll have a role on Penn State this year and for years to come.

This is an idea of what Penn State’s starting frontcourt will look like for the season-opener, but it could very well change by January. Taylor, a 6-6 forward out of Trenton Catholic, has helped Penn State space out the floor in past seasons thanks to his ability to hit 3-pointers, though Taylor has always been a streaky shooter in college. He did end his junior campaign with one of his best shooting stretches, however, hitting 47 percent from deep in the last five games.

Dickerson gives the Lions a 7-1 rim protector, who could be near the top of the Big Ten in blocks this season. The SMU transfer has never flourished offensively, however, and he’ll need to stay out of foul trouble to build on his 3.3 rebounds per game average from 2014-15. 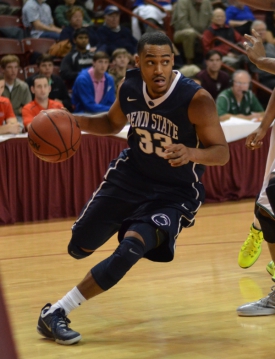 Garner was a Day 1 starter as freshman under Chambers, and he finished second on the team in scoring, with more than half of his points coming on 3-pointers. But without Newbill beside him, Garner is going to have more on his plate this season. If Foster starts, Garner can share the ball-handling duties, which should free up the Roman Catholic graduate for more open looks. Garner will also be hoping to up his percentages from the field this season – they were 33.7 percent from three and 36.4 percent from the field his freshman season.

Chambers noted Reaves will have to earn his spot, but as long as the freshman shows in practice what he showed in high school, it’s hard not seeing him earning his way into the starting lineup early in the season. Foster, meanwhile, is a junior college transfer who provided the Lions with some backcourt depth last season during conference play. It took Foster a while to get acclimated to the D-I level, but he is more of a pure point guard than Garner, arguably the best passer on the team and has shown the ability to get to the rim.

Chambers will have some options is how he wants his rotation will look, and he’ll likely experiment with it a bit in the Lions’ non-conference schedule. The team is rather deep in the frontcourt; the trick for Chambers will be finding combinations that work.

Jack is one of the most experienced players on the roster, but saw his playing time dip from his sophomore to his junior season and averaged just 13 minutes per game last year. Jack does have the ability to knock down jumpers and threes, but has never produced consistently in the Big Ten. This season could be a big step for Moore, who appeared in all but one of Penn State’s games this season. The Germantown Academy product has added to his frame since arriving at Penn State, and if he can put it to use, he’ll get more time this season.

A redshirt freshman last season, Banks never got his stroke down as he hit just 11 of his 39 3-point attempts. Chambers did use him in 29 games last year however, and it sounds like the Orange, Calif. native had a solid offseason.

Three Games to Watch
1. vs. Michigan (Jan. 30). The Nittany Lions’ fan attendance at the Bryce Jordan Center has not been the greatest over the years, but a move to the Mecca may draw a large blue and white contingent as Penn State hosts Michigan at Madison Square Garden. The game is part of a basketball-hockey doubleheader at the world’s most famous arena. It will also be a homecoming for senior center Jordan Dickerson, a New York City native, the 7-footer played at Abraham Lincoln High School, the powerhouse school that has produced multiple NBA players.

2. at George Washington (Dec. 8). This game might tell the most about the Lions before they start Big Ten play. The Colonials are one of the tougher opponents on Penn State’s November/December schedule, and will be looking to avenge a loss at the Bryce Jordan Center last season. It will be one of four true road games for Chambers’ bunch before conference play, and the team also visits Boston College, Duquesne and Drexel.

T3. Vs. Canisius (Dec. 10)/vs. Louisiana-Monroe (Dec.12). They certainly don’t seem like “games to watch” on paper – but these are both contests Penn State fans should try to see with their own eyes. Both contests will be held at the Lions’ old gym, Rec Hall – where the team last played full time in the mid 1990s. Built by the same architect, Charles Klauder, who designed The Palestra, Rec Hall has an old school feel that can be appreciated by college basketball fans. This is the second year Penn State has hosted a “Return to Rec” event, as it hosted Princeton in 2013-14. The turnout was great that day, but the Lions coughed up a 20-point lead and fell to the Tigers in overtime.

Three Keys to Success
1. Develop Garner, Reaves and Watkins. Penn State is going to need production from a lot of players if it is going to be competitive in the Big Ten, but this underclassmen trio will be worth keeping an eye on all season. They are focal points of the Lions’ rebuild and it will be intriguing to see how they play together and how they do individually. Garner should show improvements from the player he was last season, and the freshmen should do the same from November to March.

2. Get a win early in the Big Ten season. Winning? What a key to success, right? Well, for Penn State a win in late December/early January against a conference opponent would be a welcomed change. The Lions have gone 0-6 to start Big Ten play in both of the last two seasons – taking all momentum away that had been built in the nonconference. Even if they end the year with less than five conference wins, avoiding that losing streak would do a lot for players’ psyches.

3. Embrace a shared scoring load. For all of the Chambers era at Penn State, either Tim Frazier or Newbill (and for one season both) were there to be the go-to scoring option for the Lions. That role is vacant now, and Chambers called that “exciting” during the team’s media day. Penn State probably won’t have a player consistently going for 18-plus every game, and the team will have to learn to ride the hot hand on a given night.