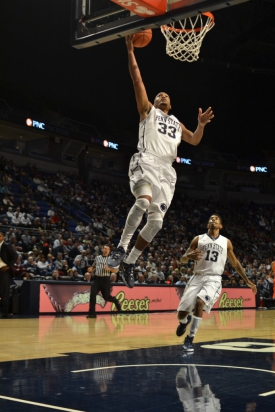 Shep Garner (above), a Roman Catholic grad, could lead PSU in scoring as a sophomore. (Photo: Madeline Pryor/CoBL)

As the basketball practice gym at the Bryce Jordan Center opened its doors for the first media availability for the 2015-16 Penn State basketball season, the scrum quickly arrived around one player.

Moments after head coach Pat Chambers proclaimed his uncertainty of the team’s go-to scorer, the media appointed sophomore guard Shep Garner the most important player in the gym.

“I had a good preseason,” Garner said. “I’m very confident going into the season.”

Garner is poised to be the next man up in the Penn State backcourt with the departure of one of the best scorers in Nittany Lion history, D.J. Newbill, to graduation and the transfer of Geno Thorpe. Garner shared the backcourt with Newbill last year and is now expected to do some heavy lifting in the scoring and passing departments.

“Obviously Shep proved himself last year to be very capable of being that go-to guy or that scorer for us,” Chambers said in his press conference. “Shep is able to rise to that occasion.”

Garner, a Chester native, graduated from Roman Catholic High School in 2014 as a 1,000-point scorer. The three-star recruit signed with Penn State after his junior year and went on to average 16 points per game in his senior campaign while earning an all-state selection.

In his freshman season, he averaged 9.2 points per game while dishing 2.3 assists per game, second only to Newbill in both categories. He really made his mark behind the 3-point line, nailing 59 shots from distance, also second on the team.

That being said, shot selection has been a question mark as Garner became prone to ill-advised attempts, even while not having the hot hand. He finished the season shooting 36 percent from the field and 34 percent from the arc.

When asked what he wants to improve on the most this season, he quickly stated: consistency.

“I want to make sure that I'm doing everything right day-by-day,” he said. “Setting a good example for my teammates and just trying to get better everyday.”

The 6-foot-1 guard’s unwavering confidence in his shooting stroke has enticed Chambers, whom encourages that from all his players.

“I want my guys on offense to play with the ultimate confidence,” Chambers said. “If they’re playing with confidence and they feel like they can make that shot, I got to let them shoot it.

“Most importantly ... we stay attached at the hip and he brings a consistent effort every, single game. Whether he is making threes or not, he has to be real consistent for us.”

Despite being a sophomore on a roster with four seniors, Garner’s leadership will be counted on during the season after starting in 33 of 34 games last season.
He is a one of five members of the leadership council within the program, and he’s been working closely with freshman Josh Reaves to help ease the transition to intercollegiate play.

Reaves said he watched some games from last season and noticed Garner’s confidence in his own ability while still setting his teammates up in good situations.

“He tried to facilitate and get the ball into D.J. and D.J. worked from there, and when he needed to score he could score,” Reaves said. “I just watched that and how much confidence he had in himself, I feel like I can take that into this season.”

All hands will be on deck with this Penn State roster, and Garner is confident in this group’s ability after an 18-16 finish last season.

“We just want to come in here and come practice, go hard everyday and be the best team we could be by March," he added.