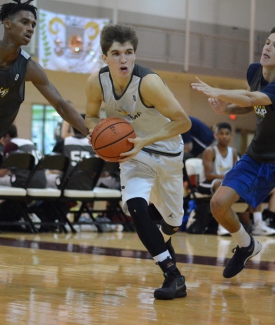 The second CoBL College Exposure Camp of the season took place on Sunday, with 100 area high school juniors and seniors coming to Philadelphia University for six hours of basketball instruction and games under the guidance of Division III coaches.

Here are some seniors who really elevated their games this weekend:

Nasir Bell (G/Martin Luther King)
Bell was huge factor on both sides of the ball for his team and he left his mark as ferocious rebounder throughout the day. In his team’s first game, the 6-1 senior racked up at least seven offensive rebounds in the first half alone and he finished the game in double digits. He also showed a gritty offensive game, frequently scoring on putbacks in the paint. He did an excellent job of finishing through contact after snagging offensive rebounds.

Randy Bell (SG/Timber Creek)
Standing at 6-3, Bell commands attention when he is on the floor. He used impressive dribbling skills to penetrate the defense on the perimeter, and averaged eight points per game over the course of the day, including a high of 13 in a single game. The athletic guard also was part of one of the teams at the camp that played an uptempo, high-pressure defense, and he was very good at pressuring opposing ballplayers and helping his teammates form traps in the corner, resulting in a number of turnovers.

Matthew Gnias (G/Spring-Ford)
A 6-2 combo guard, Gnias was equally adept at creating his own shot or finding the open man on his team for an easier bucket. One of the tougher competitors all day long, Gnias was constantly fighting for rebounds, diving on the floor for loose balls and disrupting passing lanes, and certainly made his teammates better around him. He got most of his points from jump shots, hitting several in the mid-range as well as a few from beyond the arc on the afternoon, but it’s his all-around play and not just his scoring ability that made him stand out.

Connor Lynch (G/Central Bucks West)
One of three CB West kids at the camp, Lynch demonstrated all the abilities that the Bucks coaches love in their players--dribble, pass and shoot on offense, and play tough, scrappy defense. Lynch did a great job of attacking the basket and forcing defenses to collapse, and was equally adept at kicking out to an open teammate if the easy layup wasn’t there. At 6-2 and 170 pounds, Lynch has very good size for a combo guard and the smarts to play at the high-academic Division III level, and could be an impact player right away in the Centennial Conference or similar leagues.

J.J. Melchior (SG/North Penn)
For a shooting guard, Melchior has outstanding size at 6-5. He showed the ability to use his length to create his own shot and knocked down long-range jumpers all day, with a smooth high release that will work at any level. The ball seemed to find Melchior on every possession and with the defense collapsing, he had the awareness to swing to ball to open guards on the wings, as well as the feeding the big men in the lane. Defensively, he was able to close out on other shooters frequently and created havoc for opponents.

Colin Mulvaney (G/Jenkintown)
Mulvaney displayed his excellent ability to both drive the lane and finish  yesterday as he was a big part of his team’s success as one of the leading scorers. The 6-0 guard got to the rim at will, and he was successfully able to dish it out to open shooters on the wing when given the opportunity. Defensively, he was very active, and forced multiple turnovers to help his team get out on the break. In three games, Mulvaney averaged 13.7 points per game, including a camp-high 23-point effort in his final game of the day.

Keinan Oxner (SG/Eng. & Sciences)
Strong with the ball at 6-1, 178 pounds, Oxner was a key asset to his team during games Sunday. Comfortable with the ball in his hands or playing without it, Oxner averaged 10.7 points per game, knocking down jumpers and showing his ability to get to the rim. He had at least eight points in all three games, producing one of the camps most consistent scoring efforts. He also occasionally brought the ball up the floor and often made the right pass when it was available.

Justin Sutton (F/Cheltenham)
The Cheltenham big man proved to be a very difficult matchup for all three teams he faced, as he was one of the most consistent camp performers. In all three games, the 6-4 forward scored at least 10 points, and averaged 13.3 points per game. He was very successful using his left hook, and even stepped out into the mid-range and knocked down a few jump shots.  Sutton was a force both defensively and on the glass with multiple blocks and a large chunk of his team’s rebounds.

Joshua Townsend (F/Imhotep)
Townsend was one of the most forceful post presences at the camp, using his 6-foot-6, 205-pound frame to his advantage. Townsend constantly got in good position on the block, and his teammates kept feeding him for good reason. In one game, Townsend had 18 points and converted three hoops while getting fouled. His body control and ability to absorb contact will benefit him no matter where he is playing on the floor.

Max Wagner (F/Pennridge)
At 6-8, Wagner was one of the tallest players in the camp, so when he spots up from beyond the arc there isn’t much opposing defenders can do about it. Wagner excels as a pick-and-pop stretch forward who loves to trail the break and spot up from the wing, and his shot fell more and more consistently as the day went on. He does prefer to play around the perimeter than inside, but he fought for his fair share of rebounds on both ends of the floor and does a very good job of throwing outlet passes once he’s secured them.

Anthony White (SG/Cheltenham)
White, a 6-3 senior, did an excellent job of controlling the tempo of the three games he played in. He showed a great understanding of when to push the ball up the court and when to slow it down and run the offense. He shined in the open court and is at his best when he can use his athleticism on fast breaks to either score or dish to teammates. White has a lanky frame and he used his long arms to make it tough for his opponents to drive by him.

Khalil White (G/Cheltenham)
Yeah, it was a good day for the Cheltenham seniors. White, the Panthers’ leader this season, was arguably the most impressive of the three. A speedy 6-0 guard, he was one of the more natural scorers in the camp, with a smooth pull-up jumper that he can utilize from the mid-range or beyond the arc. White has the ball on a string and won’t hesitate to throw a tight pass in the lane or a skip pass over the defense for an open 3-pointer. He’s already got many D-II and D-III schools in the area chasing him, and it was easy to see why; his 18-point performance in his final game of the day was the cherry on top.