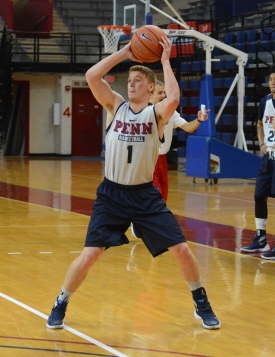 Cherry Hill East alum Jake Silpe (above) and the four other Penn freshmen all stayed committed through a coaching change. (Photo: Josh Verlin/CoBL)

Penn’s incoming class of 2015 was already pretty much locked in when Steve Donahue took over.

Though recruiting classes often fall apart when a coaching change occurs, the Ivy League schools are a little different due to their academic reputation.

Five high school senior ballplayers had committed before Jerome Allen was removed after six years at the helm in March, and all five are now freshmen on the Quakers’ roster.

Based on early returns, Donahue has at least five good reasons to thank his predecessor.

The biggest surprise of the offseason has been New Hampton (N.H.) product Max Rothschild, a Chicago native who did a post-grad year at the New England prep school. Rothschild is a mobile 6-8 power forward who’s certainly benefitted from his extra year before getting to college.

“He just has an understanding without having the ball, how to help his team win...he’ll make a great pass, he’ll make a hard cut for a finish, he’ll be physical on a post-up to guard it,” Donahue said. “He does those things and I had no idea, he’s going to be someone who can help us pretty quickly.”

Though the two are slightly ahead of the curve in terms of their understanding, their coach sees them in two different stages in terms of freshman year expectations.

“I think (McManus) is going to be a really good player for us, I don’t know when,” Donahue said. “Jackson’s different because he has a role, he can really shoot it. He competes...and he has a skill that translates to this level pretty quickly.”

The most highly-sought-after of the quintet was Cherry Hill East (N.J.)’s Jake Silpe, who picked Penn after picking up scholarship and roster offers from a dozen other Division I schools, including the entire Ivy League plus Drexel, Bucknell and more.

Silpe, a 6-2 point guard, led the Cougars to back-to-back South Jersey Group 4 titles, the first two in school history; that winning attitude is something the coaching staff is hoping will spill over to the rest of the team.

“I would say he’s definitely someone that you consider, if not to start, that’s going to be someone that we really rely on for sure,” Donahue said. “Very intense, focused kid, wants to be great. He’s going to be a very good player for us in terms of building the culture and helping us compete and win.”

While Silpe has been widely expected to contribute right away and play a big role for the program moving forward, he does have plenty of competition in the backcourt.

Senior Tony Hicks is going to play 30-plus minutes per game after leading the team in scoring the last two years, and sophomore Antonio Woods had a very solid freshman season, averaging 8.4 ppg and 3.8 apg while starting 15 games. Another sophomore, Darnell Foreman, averaged 3.5 ppg in a reserve role last season. And then there are the other freshmen, Donahue and Tyler Hamilton, an Atlanta native who spent a season at Cheshire Academy (Conn.).

So all of the guards are going to have to play multiple positions on the perimeter, Silpe included.

“Last year I was 100 percent a point guard,” he said. “I feel like this year maybe I’m able to play the point guard but also on the wing and I’m developing my outside shot, so I’m going to do whatever it takes and whatever coach wants me to do, if it’s playing on the ball or off the ball.”

As high as Donahue and his coaches are on the freshmen, this class is equally as optimistic about what the future holds.

All five made the decision to stay true to their original commitments, and it seems to be paying off already.

“He really believes in his players and is very passionate about what he believes in,” Silpe said. It’s branching out on us and I think we’re going to be really successful.”