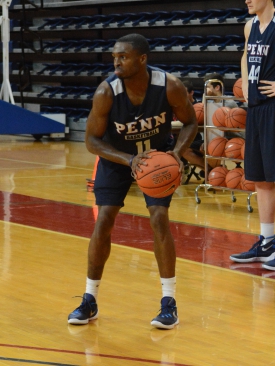 Tony Hicks (above) and the Quakers have reacted well to Donahue's friendly approach. (Photo: Josh Verlin/CoBL)

A new coach often brings a completely new offense as well as a fresh outlook on the game itself for a team in a transition.

First-year Penn coach Steve Donahue, who coached at Cornell for 10 seasons, employs a positive attitude both during games and practices. It is the kind of thing that is easily noticed by his players and has made an impact thus far with the Quakers.

“There’s a lot of positivity, and I think that’s really good for the type of kids we’re going to get to come here,” senior guard Tony Hicks said. “Just knowing that nothing is going to be negative, he’s giving everyone confidence at all times and that allows you to play freely.”

Donahue did not always have that positive outlook and coaching style. He used to be more demanding of his players and of his team as a whole before a life-changing event during his time at Cornell on January 24, 2006.

The team had just lost a heartbreaker to Columbia and the Big Red were running at full speed in practice when sophomore guard Khaliq Gant dove for a loose ball during practice. He collided with two other players and dislocated two vertebrae and bruised his spinal cord, ending his playing career.

“It it was one of those moments where I was like ‘what am I doing coaching like this?’,” Donahue said. “I was trying to motivate but I was just driving them so much that I thought it was detrimental to our growth. After that point, I just made a conscious effort that I look at things and I try to get growth out of every practice and kid and do it in a positive way.”

Aside from his positive attitude in his handlings with his players, Donahue runs a drastically different offense than that of his predecessor. He focuses more on flowing the offense through his big man and taking more 3-pointers. It is a playing style that meshes well with the makeup of the Penn roster.

“There is in the sense that I think it’s someone we can run our offense through,” Donahue said. “And we utilize that, so we’ll go through him when things we’re struggling, whether it’s on the low post, elbow, top of the key, dribble handoffs. I think the more he does it, the more he sees the advantage of playing like that.”

Nelson-Henry has already seen the difference in coaching style and is excited for the increased use in the offense, adding that he “really likes the way the offense works with big guys.”

Another key change is not just the implementation of a higher percentage of three-pointers being taken, but that Donahue wants everyone on the team to be comfortable taking them if they get an open shot.

Penn finished sixth in the Ivy League last season with a 3-point shooting percentage of 34.6 percent. This also placed them in 159th place out of the 351 Division I teams. Part of the way to change that is to add versatility to the lineup, to enable everyone to practice three-pointers during practice and not pigeon-hole anybody’s skillset.

“I think it’s important that we develop kids who have that ability to play all aspects of the game,” Donahue said. “We’re going to be a much better team because of it, gives us more margin for error on the defensive end. They’ve got to be able to play on the defensive end and rebounding and all of those things, but we have a number of guys on the offensive end that can create their own shots and create for others, so it’s important that those guys make shots, because we have guys that can get them shots.”

Several players have benefited from this play style, but perhaps nobody more than sophomore guard, Sam Jones. The 6-foot-7 forward took 118 threes last season, leading the team in attempts and made 54 of them for a 3-point shooting percentage of 43.6 percent -- good enough for second in the Ivy League.

Jones accomplished his 3-point success while only playing an average of 16.3 mpg. He figures to play a larger role in his sophomore campaign, especially in an offense that will be so heavily oriented around his specialty, knocking down shots from behind the perimeter.

“I think it is going to show a little bit more what I can do with a couple more opportunities to shoot the three and hopefully knock down a few more shots,” Jones said. “ I hear we are going to start shooting the three, that makes me a happy, that is what I do best, the more opportunities I get the happier I’ll be.”

Plenty more, other than Jones, will be happy if Donahue’s new offensive scheme leads to success on the court.