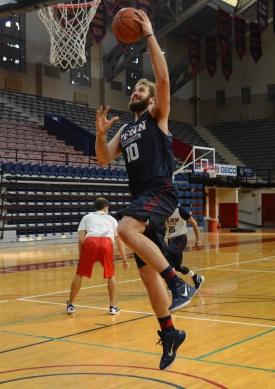 Senior Darien Nelson-Henry (above) figures to be a big part of the Quakers' offense this year. (Photo: Josh Verlin/CoBL)

After a trying few years, the Penn faithful have put their hopes into a coach who’s already shown he can bring an Ivy League program to the Promised Land. Donahue inherited a Cornell program that went 4-22 in his first season back in 2001-02 but built them up to a 29-win squad in 2009-10, making a run to the Sweet 16 that would earn the head coach a high-major job at Boston College. Though Donahue wasn’t able to replicate that same success at BC, going 56-74 (.415) in four years at the helm of the Eagles, he’s eager to get back on the sidelines after a year in the broadcast booth and try to get the Quakers back on track.

Donahue takes over for former Penn guard Jerome Allen, a popular figure among Quaker alumni who was thrust into the head coaching job back in 2009 when then-head coach Glen Miller was fired seven games into the season. Allen guided the Quakers to a 20-13 record in 2011-12 but couldn’t get them to win more than nine games in any of the three seasons since, and second-year athletic director M. Grace Calhoun decided to go in a new direction to try and get the program back to the NCAA Tournament for the first time since 2007.

Louis wasn’t the only senior that graduated from Penn’s roster last year--guards Patrick Lucas-Perry and Camryn Crocker also exhausted their eligibility--but he was the only one of the three to really see any sort of significant, regular playing time. The 6-7 combo forward was the team’s sixth-leading scorer last year, making 55.8 percent of his field goal attempts, almost all of from within 15 feet. While Louis was a solid contributor for three season, his production should be replaceable with the young talent on the Quakers’ roster.

Donahue can certainly thank Allen for putting together two consecutive strong recruiting classes that have left the program stocked with young talent, including this group of five freshmen who should play a big role in the program’s planned turnaround. There’s a little bit of everything in this freshmen class, with a highly-sought after point guard, some pure shooting ability and some size and athleticism in the frontcourt.

The gem of the class is likely to be Silpe, arguably the top player in South Jersey the last two years. The 6-foot-2 point guard, who led Cherry Hill East to consecutive South Jersey Group 4 titles, had offers from the entire Ivy League and a few others before committing to Penn last fall; even if he doesn’t earn a starting spot right away, he should be playing serious minutes right away due to his toughness on both ends of the court.

Also impressing the coaching staff this fall has been Rothschild, a 6-8 forward and Chicago native who's coming out of one of the powerful New England prep schools. The New Hampton product is an athletic face-up forward who doesn't mind getting physical in the post, but he can also step out and knock down perimeter shots with some regularity. Two more prep products, Northfield Mt. Hermon (Mass.)'s Donahue and McManus, will also challenge for minutes.

Though he’s put together a solid three years at Penn, averaging 8.8 ppg and 4.8 rpg, it’s always felt like the Quakers haven’t seen the best of Nelson-Henry. A 6-foot-11, 265-pound center from Washington, Nelson-Henry has great hands and feel around the rim, but he’s struggled with inconsistency and some injuries in his time in West Philadelphia. After averaging 10.6 ppg while making 59 percent from the floor as a sophomore, Nelson-Henry’s shooting percentage dropped to 51.7 percent as a junior, and his scoring similarly suffered. Donahue has to find a way to better utilize the big man and increase his effectiveness, even if he’s only in the game for 24-26 minutes per game.

A foot injury set Auger back a bit as a freshman, costing him six games right after he scored 28 points over consecutive games against Rider and Lafayette in November. He wouldn’t hit double figures again for the rest of the season after doing it in both of those games, but he displayed the motor and athleticism that will serve him well for the rest of his college career. Now, the 6-7, 225-pound combo forward will likely step into a starting role alongside Nelson-Henry, though his minutes are still only likely to be in the 20-25 per game area. 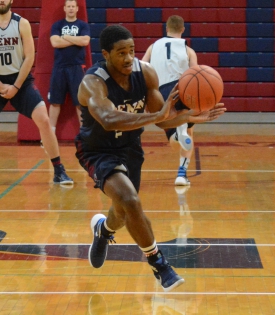 The Ivy League has  a few strong backcourts, and this Quakers' group of ballhandlers will have a chance to stake their claim with the top in the league. The top dog for the second year in a row will be Hicks, who spent this summer down in Miami working in an internship as well as with Stephen Curry's trainer. With an even more varied offensive arsenal and improving talent around him, the 6-2 Chicago native should hopefully be able to cut down on his turnovers (3.2/game) and become a more efficient ballplayer.

A lot of that will have to do with the continued development of Woods, who started 15 games a year ago. After hitting double figures seven times over the first 21 games of the season, he went for 10-or-more five times in the last seven; that included his first career double-double, a 15-point, 11-assist outing against Cornell. Out on the wing will be Howard, who upped his scoring average by six points between his freshman and sophomore year but will certainly need to improve upon his .321 3-point percentage from a year ago if he wants to play big minutes in Donahue's shot-heavy offense.

The Quaker bench is full of promise, and many of the players have noted the competitiveness of practice this year with the knowledge that Donahue is trying to narrow things down to a top 10--four forwards and six guards, by his estimation. So with two forwards and three guards in the starting lineup, that leaves room for a bench of about 5-6 players--above are six, though any one of them is liable to fall out of the rotation if they're not producing.

Foreman was the backup point guard last year to Woods, but it's certainly a possibility that he falls behind Silpe in the rotation before long; either way, both will see minutes either on or off the ball working with Woods and possibly Donahue as well. Backing up Howard on the wing is Sam Jones, a 6-7 sharpshooter who could thrive in the new system.

Three Games to Watch
1. vs. Robert Morris (Nov. 13). This is a good first game for Donahue, as RMU has been one of the stronger programs in the Northeast Conference under head coach Andy Toole. Toole, a Penn alum (2003), was one of several names that floated around when the job opened up in March, as he’s led the Colonials to a 110-65 (.629) record in five years at RMU as well as a trip to the NCAA Tournament in March. Keep an eye out for 6-8 sophomore Elijah Minnie, who put up 6.8 ppg and 4.8 rpg as a freshman, to break out this season. The last time the two programs met was in Penn’s last winning season, a 66-60 Quaker win on Nov. 14, 2011.

2. vs. Princeton (Jan. 9). Penn’s whole season really comes down to the 14-game Ivy League schedule, which begins as it always does against archrival Princeton. The 232nd all-time wmeeting between the two will be on Penn’s home court, which could be the difference-maker in a game against one of a few teams that is expected to challenge for the league crown. Junior guard Spencer Weisz (11.6 ppg, 4.9 rpg) is a terrific all-around player, and sophomore guard Amir Bell (8.8 ppg) could become one of the tougher scorers in the Ivy League to stop.

3. vs. Columbia (Feb. 27). Perhaps the best player in the Ivy League visits Philadelphia in Penn’s final home game of the year, as Maodo Lo (18.4 ppg, 4.4 rpg) and the Lions come to the Palestra. One of the other Ivy League favorites, Columbia will welcome the return of senior forward Alex Rosenberg, who averaged 16.0 ppg and 3.7 rpg two years ago but missed last year with a fracture in his foot. Columbia hasn’t been to the NCAA Tournament since 1968, and it’s very possible they’ll be playing for a bit in the second-to-last weekend of the Ivy regular season.

Three Keys to Success
1. Develop new identity. After six years playing in Jerome Allen’s system, the Quakers are having to spend the offseason largely learning Donahue’s style, both on and off the court, as well as adjusting to his expectations and focal points. Based on his time at Cornell and early returns from Quaker practices, it’s clear that Donahue wants his players to take shots from one of two players: at the rim, or behind the 3-point line. It doesn’t matter if it’s one of the team’s point guard options or 6-11 center Nelson-Henry, Donahue expects his players to be able to spot up behind the 3-point arc, or be able to put the ball on the floor and find an open teammate.

2. Find a steady rotation. One of the biggest complaints of Allen’s tenure was his inability to find a consistent rotation, especially in the last two seasons. Players would see 30 minutes one night and then disappear for a few games, and there were times where it was just a matter of putting out different lineups to see what worked in any particular game. Donahue says that he prefers a rotation of six guards and four bigs, and if he can stick to that rotation it will help develop that new identity and establish continuity moving forward.

3. Feed the big man. When Cornell made its Sweet 16 run under Donahue in 2010, it was in large part due to the play of senior center Jeff Foote, who averaged 12.3 ppg, 8.1 rpg and 2.3 apg, and went on to be a D-League all-star in 2012. Nelson-Henry doesn’t need to put up numbers much bigger than that to have a huge impact in his own senior year, after three seasons where it’s never quite felt like he’s had the role he was meant to have. Penn seems determined to make sure Nelson-Henry and the other forwards get touches both in the low block and out on the perimeter and give them the ability to make plays.