Lehigh's Justin Goldsborough wants to go out on top 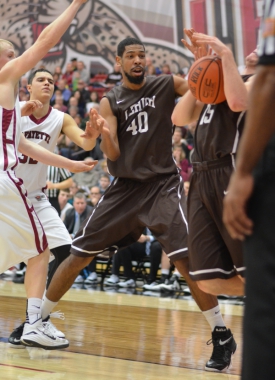 Justin Goldsborough was there the last time Lehigh was in the NCAA Tournament. Still a high school senior and Mountain Hawk commit at the time, Goldsborough had to watch from the stands.

But viewing 15th-seeded Lehigh knockoff national powerhouse Duke in 2012 is not a moment that will slip from his memory.

“I came down, it was crazy in the stadium,” Goldsborough recalled. “(North Carolina played the next game and) UNC fans asked me for autographs because I had a Lehigh shirt on. It was awesome.”

More than three years removed and that upset is the only taste of the big dance Goldsborough has had since he’s been associated with Lehigh. Entering his senior year, he doesn’t want to leave Bethlehem without that changing.

The Mountain Hawks have their eye on the Patriot League title this season with a strong team that is aided by a few different aspects. There’s Kahron Ross’ playmaking, Tim Kempton’s ability to get a double-double on any given night and Austin Price’s scoring. But there’s another one that can’t be found on the box score: Goldsborough’s energy.

An athletic, 6-foot-8, 210-pound forward, Goldsborough provided more than just a high-octane presence last season, too. In his junior year, he was fourth on the team with 7.5 points per game and second only to Kempton in rebounds, hauling in 5.8 per contest.

It was a breakout season for Goldsborough, who started in 22 of the team’s final 23 games (the lone exception came on senior night). The Fort Washington, Md. native’s 173 rebounds last season were nearly double the mark he had during his sophomore campaign, and his 38 blocks led the team.

Alongside Kempton, Goldsborough make up an established frontcourt that should help the Mountain Hawks matchup well with anyone in the Patriot League. Goldsborough will still be called upon for rebounds, blocks and energy, but he also refined his shot during the summer -- both from the field and the foul line.

Goldsborough wants to be able to knock down some mid-range jumpers if he’s open, and he also does not want to leave so many points at the foul line. After starting the season 20-for-25 (80 percent) from the line last season, Goldsborough made just 20 of his final 41 free throws (48.7 percent).

“I worked on my outside jumper a little bit, and also my free throws,” he said. “That was a big thing because I started shooting well from the foul line last season, but then my percentages kind of dipped, and I don’t want that to happen again this year.”

Goldsborough’s offensive improvements have caught the eye of coach Brett Reed, who expects the senior to be able to do more with the ball in the post this season. But what Reed has really seen in Goldsborough is his work ethic.

“I would have probably never thought this four years ago when he was a freshman, but he was one of our hardest workers in the fall preseason,” he said. “He was winning virtually every sprint in conditioning and that was not the case when he first got here. So he’s learned how to play hard, and he’s learned how to utilize his athleticism to help the team.”

So Goldsborough has grown up a lot since he was just a kid witnessing one of the biggest wins in program history. Now he just wants that same opportunity for himself.