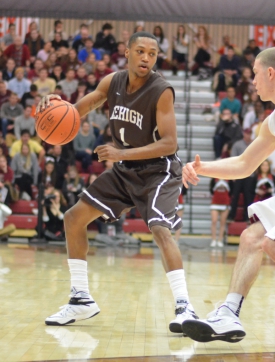 Kahron Ross (above) led the Patriot League in assists as a freshman. (Photo: Josh Verlin/CoBL)

Early in the second half of Lehigh’s regular season finale against American, Kahron Ross found himself in a familiar position: dribbling off of a Tim Kempton screen towards his strong right hand.

No fewer than four distinct reads later, Ross whipped a one-handed, cross court pass without even picking up his dribble, hitting a wide open Austin Price for a knock down three-pointer.

At this point, Ross had essentially mastered the intricacies of pick-and-roll offense, making the single most difficult pass one could make when coming off a screen, a pass most point guards don’t even know is there.

It took Ross all of two dribbles to read the entire defense, seeing the play unfold before it happened and delivering a pinpoint pass.

It was the final step in the evolution of Ross’ favorite part of the game, the pick-and-roll.

“Well in high school, people were a lot slower and shorter so I used to hit the roll a lot, but when I got to college, the guards started to drop,” Ross said. “I didn’t come here knowing how to do all of that. I knew the basics but hadn’t did it in a game situation, so it took me a minute to adjust, but now I think I’m fine.”

Now, Ross describes those advanced reads as his best skill once he gets going off of a screen.

His ability to read and react to the defense generates a slew of open shots for the Mountain Hawks’ offense, and went a long way towards Ross racking up his Patriot League-leading 5.8 assists per game last season, his freshman campaign.

“If I’m coming off the screen, I know the big is supposed to roll or pop, the wing is supposed to replace, and the opposite wing is spotting up,” he said. “When everybody’s in their spot, the defense has to make a choice, and whatever choice they make, I just try to make them wrong because I have so many options.”

Of course it helps having a big man like Kempton, the 2014-15 Patriot League Player of the Year, setting screens for you.

Kempton’s 6-foot-10 frame makes him a threat rolling down the middle of the lane to catch and finish, but he’s also skilled enough to catch, put the ball on the floor, and create. The fact that he can also pop out and shoot consistently from the mid-range is just icing on the cake.

Kempton also has the innate feel to find the open cracks in the defense, and he’s always confident that Ross will find him once he gets there.

It didn’t take long for the point guard and center to form a bond upon becoming teammates last summer, and that chemistry has served them well on the court, with Ross’ presence undoubtedly playing a significant part in Kempton’s breakout sophomore year.

“Through practice and just through hanging out outside of practice, we were able to formulate a bond that most teams don’t have between a big and their guards,” Kempton said. “Most of the times we seem to be in the right place and we find each other at the right times, and especially him handling the ball all the time, he knows when to get me the ball and when to take the right shots.”

While Ross has now seemingly mastered the most advanced aspects of the pick-and-roll offense, he spent the summer working on one of the more basic skills that will only make that much more dangerous.

Last season, the jitterbug of a point guard excelled using the ball screen as the head start he needed to get all the way to the rim and finish. Once defenders started going under screens, though, forcing him to shoot, Ross struggled.

With an improved jumper entering his sophomore year, Patriot League coaches will now be forced to pick their poison when defending the league’s rookie of the year.

“We’ve already seen his shot improve,” said head coach Brett Reed. “For as dynamic as he was off the dribble, combine that with now increased shooting percentages from the perimeter, it’s gonna make a lot of defenses scratch their head as far as, ‘How are we going to guard this guy?’”

The improved jumper will only open up Ross’ dribble-drive game even further, and give the Mountain Hawks’ offense another set of options in the half court.

“Last year they went under the screen a lot and kind of forced me to shoot. This year I’ve been working on it so now if they force me to shoot, I’ll shoot it. If I make it, then they have to go over the top,” he said. “When they go over the top I’ll have an advantage. Tim’s man will have to help on me, and then once he rolls everything just falls into place like that.”

With two more years left to wreak havoc on the Patriot League together, the Ross/Kempton pick-and-roll figures to become about as lethal at the mid-major NCAA level as the Stephen Curry/Draymond Green combo did in the NBA last season.

While neither player will be rewarded after the season with the $80 million contract that Green signed this summer, the duo is hoping their offensive prowess will help the Mountain Hawks cap their season the same way the Warriors did: celebrating a championship.

“I feel like that’s everyone’s expectation here, we all want to win a championship,” Ross said. “We’re just taking it one day at a time, but that’s our goal.”