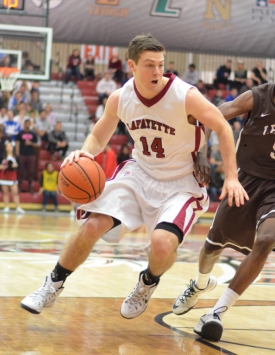 Bryce Scott (above) will become one of the Leopards' offensive focal points this season. (Photo: Josh Verlin/CoBL)

Bryce Scott is one of the best spot-up shooters in the Patriot League.

He’s shot at nearly a 40 percent clip from beyond the arc in his first three years at Lafayette, and as a left-handed marksman, helped the Leopards win the Patriot League tournament last season. With four other scoring threats on the court, opposing defenses couldn’t focus too much on Scott.

But with a Lafayette roster deflating by graduation, Scott won’t have that luxury this year.

The senior guard understands he will be a larger part of the offense in the 2015-16 campaign, and he also expects defenders to not give him much breathing room on the perimeter.

“I know that is exactly what they’re going to do, and that’s what they did last year,” Scott said of defenses playing him tight at the 3-point arc. “I didn’t really have much of a scoring role last year. But coaches have prepared me, and I’ve worked really hard to mold into a scorer. I’m going to do whatever my team needs me to do, even if that is not scoring, whatever it is, I’m willing to do it.”

Scott, 6-foot-2, 190 pounds, was fifth on the team last season with 8.3 points per game, and second on the team with 51 treys, shooting 39.3 percent from deep. In the Leopards’ 20-win season, 58.6 percent of Scott’s field goal attempts came from beyond the arc, as did 55.6 percent of his points – both marks the highest of his college career.

In addition to the scoring, Scott has also shown the ability to find open teammates at times. His 79 assists (2.4 apg) are the second-most returning to the team behind point guard Nick Lindner. And if Scott is looking to create more off the dribble this season, it could result in a raise of that average.

“I’m going to have to make plays for my teammates,” he said. “We have a lot of other good shooters on the team. It’s not just Nick’s responsibility to get them the ball. I think I’ll have a bigger role in that and also in getting to the rim.”

Lindner, the reigning Patriot League Tournament MVP, is Scott’s partner in the backcourt, an area which will be Lafayette’s strong suit this season. Lindner and Scott are two of the most experienced players on the roster, and Lindner said the two have sort of a “good cop, bad cop” mentality when it comes to instructing teammates. Scott is the positive, upbeat good cop, while Lindner said he likes to lead by example.

The duo works well together in practice, and Lafayette is going to need Scott and Lindner to do the same if the team is going to contend in the Patriot League again this season.

Scott had extremely high praise for Lindner, calling the junior the “best player he’s ever played with.” Meanwhile, Lindner expressed his gratitude playing next to Scott on both sides of the ball.

“Defensively, I’m not sure he can take a step forward. He always guards the other team’s best player, that’s what he likes to do. He does a great job with it. Offensively, maybe not that much will change. …But he’ll probably look to drive more than he did in the past, the opportunity will be there, we need someone to score.”

The Leopards lost a combined 38.7 points per game with the losses of Dan Trist, Seth Hinrichs and Joey Ptasinski. Obviously that cannot be made up by one person, and Lafayette might have play a bit different style of basketball this season while the team looks for points.

But Scott wants to help make up that ground however possible – whether that’s shooting, driving, passing or defense.

“One of the things we don’t want him to do is to play outside himself. He has to stay within himself,” Leopards coach Fran O’Hanlon said. “He’s going to get extra attention. He was a piece in the past, and now he is going to be someone people are going to focus on more and he has to be ready.”