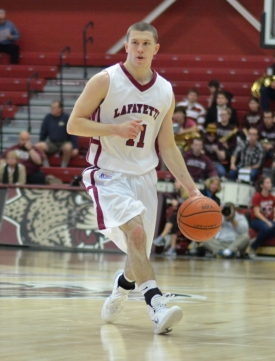 Nick Lindner (above) and the Leopards are the defending Patriot League champs. (Photo: Josh Verlin/CoBL)

(Ed. Note: This article is part of CoBL's 2014-15 College Season Preview, which will run from October 2-November 13, the first day of games. For the complete rundown, click here)

The Patriot League was wide-open last year, and Lafayette took advantage. The Leopards had the requisite talent and experience coming into the season to be seen as realistic league champions, but a pair of three-game losing streaks during conference play led to a fourth-place finish, and it took a road win at Bucknell in the Patriot League semis combined with an American upset of Colgate for the Leopards to get the opportunity to host the title game.

A 65-63 win over the Eagles got O’Hanlon and the Leopards into the NCAA Tournament for the third time in his 20 years at the school and first since back-to-back trips in 1999 and 2000, and in a draw that seemed like destiny, they were matched up in a 1-16 game against Villanova, O’Hanlon’s alma mater. But instead, the Wildcats took care of business, ending Lafayette’s dance after just one song.

No college team that CoBL covers on a regular basis will have as much to replace this year as Lafayette, which graduates three seniors that have formed the core of the Leopards for the last three seasons. The trio departs with over 4000 points scored, over 1350 rebounds grabbed, more than 9500 minutes played. They came from all over the globe: Hinrichs from Minnesota, Ptasinski from Colorado, Trist from Australia. And though their short stint in March Madness didn’t go the way they’d hoped, the three still will be remembered as one of the better classes in Lafayette’s recent memory.

Hinrichs, at 6-foot-7 and 220 pounds, was somewhere between a big, slow shooting guard and an offensively talented combo forward--but whatever he was, he was productive. He averaged 12.9 ppg, shooting 48.4 percent overall and 43.1 percent from beyond the arc for his career; his strongest season came as a junior, when he averaged a team-high 16.4 ppg. Trist, a 6-9 forward with a smooth face-up game, was a double-digit scorer as a sophomore and junior but really broke out as a senior thanks to improved defense and cutting down on fouls. And Ptasinski, a 6-3 sniper (42.9 3-point percentage), was capable of knocking down three or four 3-pointers from NBA range in a two-minute span, turning around games in the blink of an eye.

To help replace such an important class, O’Hanlon and staff brought in a quartet of players with a lot of size and athleticism, whose impact might not all be felt right away but at least some of whom should be playing significant minutes early on. Evans is the shortest at 6-foot-6, while Zalys (6-7), Barlow (6-9) and Dunkum (6-10) will make up the majority of the Leopard frontcourt for the three years following this one. Based on early returns, it seems like Zalys is the clear favorite to play right away as a freshman.

Despite similar heights, the four have very different skillsets. Evans is an athletic slasher of a wing, a lanky lefty who can knock down perimeter shots as well as good to the hoop. Zalys, an inch taller but with a much more college-ready body, has a smooth one-dribble pull-up and works off screens well in the mid-range and 3-point territory. Barlow is an athletic ‘4,’ not a true center but a lanky post who will be used a shot-blocker on the defensive end and an at-the-rim finisher on offense who can put the ball on the floor if need be. Finally, Dunkum is the anchor in the post of the group, a back-to-the-basket big who by all accounts had a strong senior season at North Little Rock. 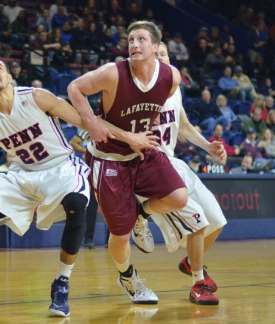 Matt Klinewski (above) is expected to take a big step forward as a sophomore. (Photo: Josh Verlin/CoBL)

Hinrichs and Trist formed the Leopards’ starting frontcourt for the last three seasons, and with would-be junior Michael Hoffman transferring, there isn’t a ton of experience left up front for Lafayette. It would seem that Musters and Klinewski would be the most likely pairing, as Musters (6-10, 270) is the biggest body on the team and Klinewski (6-8, 235) is primed to take a big step forward after a freshman year that was inconsistent but showed flashes of promise.

Musters, an Australia native, has averaged about seven minutes per game in his first three years on campus, but he'll certainly be called on to at least triple that as a senior. Like Trist, he'll be needed to improve his conditioning to better run the floor for long stretches, because there isn't a lot of size behind him. Klinewski is a tough, rugged power forward with shooting range out to 3-point range, though the Leopards coaches would probably prefer for now that he stick to 15 feet and in. He's a tenacious rebounder, but will need to cut down on his rate of fouling once every six minutes he's on the floor if he wants to see a big improvement across the board.

The good news for O’Hanlon is that he does have a trio of experienced guards to start in the backcourt, and he’ll have to lean on the three heavily all year long. Lindner, a 5-11 point guard, played some of his best basketball of his career to date in the 2015 Patriot League tournament, where he was named tourney MVP after averaging 23.7 ppg over the three games. He’s not going to need to score that much this year, but certainly more than he has been; more importantly, though, is his 2.6 assist-to-turnover ratio, which was best in the Patriot League among qualified players.

That’s actually an area in which the Rufer (34 assists, nine turnovers last year) also excels, as does Scott (79 assists, 36 turnovers). Those two, both 6-2 guards, are very solid complimentary players in the backcourt, as both--especially Scott--have proven that they’re capable scorers when given the opportunity, though neither are really used to being featured pieces in an offense. If they can each make 40 percent from beyond the arc and chip in 8-10 points per game, that’s all Lafayette should need from them offensively.

This is a year that Boykins, a 6-5 guard, could really emerge as a weapon for Lafayette off the bench and maybe even have a chance to earn himself some starts. His 3-point percentage jumped from .265 as a freshman to .410 as a sophomore, though his 2-point percentage actually fell (from .389 to .357). He's the best reserve the Leopards have in terms of creating his own shot, and he has great size for an off guard to get his shot off against most defenders. With more than 12 minutes/game likely to come his way, he should be able to double his scoring average for his junior year.

The other potential bench contributors for the Leopards are all either underclassmen who haven't played much...or upperclassmen who haven't played much. Freeland is 6-10, but barely saw action last year and didn't do much even when given a chance. It's likely that Zalys will be able to overtake him as the first "big" off the bench sooner rather than later.

Three Games to Watch
1. vs. Penn (Nov. 19). No one’s really sure what the Quakers will be like in the first hear of head coach Steve Donahue’s reign, but hopes are high based on Donahue’s success in the Ivy League with Cornell in the 2000s. By this point in the season, Penn’s sixth game of the year, we should have something of an idea, but expect there to be ups and downs early on as they’re finding their identity; a similar path that Lafayette will be on. In addition, this will be a matchup of former Jersey Shore Warriors AAU teammates Zalys and Jake Silpe.

2. vs. American (Jan. 20). It was Eagles vs. Leopards last year for the Patriot League title, and though American’s next trip up to Kirby Sports Center might not be quite as meaningful, it’s always an entertaining matchup. Mike Brennan and Fran O’Hanlon’s offenses both utilize spacing and shooting from every position on the court, which lends itself to a smart offensive game with lots of 3-pointers and backdoor cuts, and two coaches who constantly rotate lineups to test lineup advantages

3. at Lehigh (Feb. 21). The Lehigh Valley rivalry is always fun, with the campuses of Lehigh and Lafayette just a short drive away down Route 22. Where American and Lafayette are similar, Lehigh and Lafayette are opposites: the Mountain Hawks are a pick-and-roll offense based off point guard Kahron Ross and big man Tim Kempton, with shooting guard Austin Price chipping in quite a bit as well. The point guard play in this one will be stellar, as Ross and Lindner were the top two in the league in assists per game last year, but whether anybody on Lafayette has an answer for Kempton, the defending league PoTY, remains to be seen.

Three Keys to Success
1. Lindner stays steady. With Hinrichs, Trist and Ptasinski all gone, the number one player on opponents’ scouting reports will be Lindner. He’s been a focal point of the Leopards’ offense since his freshman year as their dominant on-ball presence, but he showed last year he can certainly score the ball when given the opportunity instead of just making his teammates better. With so much more attention on him, there will certainly be moments of potential frustration for the Germantown Academy product; if he can weather those bumps and keep his team even-keeled, they’ll be better off for it.

2. Musters steps up. Trist and Hinrichs’ graduation and the transfer of reserve forward Michael Hoffman means that the amount of experience left up front is pretty much nil. Senior Billy Murphy has all of 51 varsity minutes to his credit, and Freeland only played 66 minutes last year; that’s one-third of his time from the season before. Lafayette’s best hope for the frontcourt, in addition to Klinewski taking an expected step forward, is for its biggest body to play well. Musters isn’t suddenly going to become his countryman Trist in the span of one season, but he needs to give his team 20-25 productive minutes.

3. Youth production. While O’Hanlon has a few veteran players with plenty of experience remaining on his roster and a few other upperclassmen who are hoping for big minutes, he needs to start getting some decent production out of his sophomores and freshmen, especially some promising new faces. Klinewski seems the most obvious selection to take a big jump forward. His classmate Stafford, a 6-5 sharpshooter, needed a year to work on his body but should be ready for the physicality of Division I basketball this time around. Zalys, perhaps the most promising of the freshman, has been compared to a young Seth Hinrichs, with his ability to score from all three levels, and it would help if one (or both) of Auston Evans or Tyler Barlow got his (or their) feet wet, too.