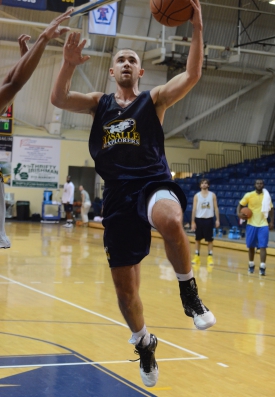 John Giannini admits he was desperate.

With just eight eligible scholarship players slated to be on the roster along with three transfers, the La Salle head coach knew he was one available body away from filling out his team but looking for available players late in the recruiting season does not usually yield many results.

“We felt like having eight (players) would be taking a risk,” Giannini said, now in his twelfth season at the helm of the Explorers.

Sometimes desperation can yield results, and Giannini found his ninth scholarship player in Dusan Majstorovic, a 6-foot-5, 195-pound wing guard out of Lee Academy in Maine.

Born in Novi Sad, Serbia, Majstorovic had originally committed to play at Utah State in November 2014, but decommitted earlier in the summer. He said his high school head coach, Igor Vrzina, also from Serbia, “helped him” get to La Salle; another Lee Academy product, D.J. Peterson, had just graduated from La Salle.

Majstorovic decided to commit to La Salle on September 1.

Giannini was both surprised and relieved when Majstorovic chose to commit to his program.

“He committed to Utah State and over the summer, came to feel that that wasn’t the best fit and all of a sudden a really good player was available and we were incredibly lucky to get him,” Giannini said.

Growing up in Serbia, Majostorovic did not begin playing basketball until he was just entering his teenage years. He became encompassed by the game and decided to pick it up so he could meet one of the game’s best, LeBron James.

“I watched LeBron James, so that’s my dream. When I started playing basketball, I started to love (the idea of playing in) America,” Majstorovic said.

During his senior year at Lee, Majstorovic showcased his skill set by averaging 14 ppg, including a career-high 36-point performance, and six rebounds per game.

When Giannini began recruiting Majstorovic, he knew very little about the Serbian-born player, but he utilized the help of coaches at Lee and even the help of Utah State Aggies’ head coach Stew Morrill for evaluation.

“I coached (Morrill) back when I was a grad assistant at the University of North Texas and he was a player,” Giannini said. “We were very confident in the evaluation that we got from people that we really trust, plus D.J. Peterson’s from Lee Academy and I know those coaches there real well, and it was just a no-brainer.

“He’s a legitimate mid-major player who could end up being even better than that, he’s not a marginal player, he belongs, he’s skilled, he’s got a good body, he’s smart, and we hope that he develops into a high-major player.”

Majstorovic joins Karl Harris in this year’s freshmen class for La Salle, but he also joins sophomore forward Yevgen Sakhniuk as foreign-born players on the Explorers’ roster. Sakhniuk was born in Ukraine and, like Majstorovic, he played for his country’s U-16 national team before coming to play in the U.S.

Majstorovic and Sakhniuk were familiar with each other before they arrived on West Olney Avenue.

“[I] played against him in the European championship two years ago, so I knew that before. Yeah, because I know and I have some European guys, I can understand him better than some Americans, so it’ll help me,” Majstorovic said of his teammate.

Majstorovic is known as an athletic and muscular guard who can defend most shooting guards and shorter small forwards, but the Explorers are not yet sure what they are going to get from him.

Giannini said both Majstorovic and Harris are “going to be in the rotation” with leading scorer Jordan Price, Cleon Roberts, Amar Stukes and Rohan Brown.  He “expects [Dusan] to be good.”

Giannini also said there’s a strong possibility he could use all nine scholarship players this season.

“If you told me right now that our top seven guys would all play great all 30 games and be healthy all 30 games, I’d say ‘Oh we’re fine.’ But I don’t think many teams are in that position,” Giannini said. “So I think we’re going to need Karl and Dusan at different points in time. And you can’t just ask them to play when problems hit, you have to play them along the way and get them experience and confidence.”

Whatever his role, Majstorovic hopes to relish it and continue to gradually improve his overall game.

“I want to play defense better and I want to shoot better. I want to help the team,” he said. “I want to go step-by-step.”