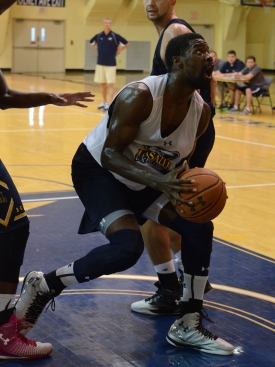 Rohan Brown (above) is ready for a big role after three years as a reserve for the Explorers. (Photo: Josh Verlin/CoBL)

Rohan Brown wasn’t sure what to think.

His head coach at La Salle, John Giannini, had just told him that he expected Brown to be the team’s Dennis Rodman in his final year of eligibility.

That brought to mind a peculiar image for a young man who grew up with one specific memory of one of the fiercest rebounders in NBA history.

“Honestly, the first picture that came to my mind was him in the dress and hoop earrings,” Brown said, referencing Rodman’s famous 1996 publicity stunt. “So I was a little confused.”

No, Giannini wasn’t expecting Brown to show up at practice one day with his hair dyed and his nose pierced.

Rodman’s final season in the NBA was in 2000, well before Brown turned 10 years old; the majority of his productive career happened either before Brown was born or while he was too young to remember.

So it’s forgivable that Brown wouldn’t initially get exactly what Giannini had in mind.

But once he watched footage of Rodman playing with the Detroit Pistons’ “Bad Boys” teams of the late 1980s and with Michael Jordan’s Chicago Bulls teams of the 1990s, Brown understood.

“When I saw him on the Pistons wearing No. 10, I got to realize what coach really meant,” Brown said. “He was crazy on the boards...he wasn’t the tallest, he wasn’t the strongest, he just wanted it more than anybody else on the court.”

It would be unfair to expect the 6-foot-6, 210-pound Brown to come anywhere close to Rodman’s career 13.1 rpg average, much less the 17-18 rebounds he pulled in each game during his peak years. Instead, it has to be about the mindset.

The Explorers graduated their starting frontcourt of the last two years, center Steve Zack and power forward Jerrell Wright. Between them, they pulled in nearly 1,700 rebounds, and they leave a gaping hole in La Salle’s lineup.

Likely replacing them will be Brown, who has averaged 1.6 ppg and 1.8 rpg in just 8.6 mpg in his three years as a reserve, as well as redshirt sophomore Tony Washington, a 6-10 redshirt sophomore center who averaged fewer than one point and one rebound per game in limited minutes a year ago.

Another sophomore, 6-7 combo forward Yevgen Sahkniuk, is the only other forward on the roster.

“Steve Zack was one of the leading rebounders in the A-10, Jerrell was a monster on the boards,” Brown said. “So I’m really hoping that me, Tony and Yevgen can definitely make up for the loss of rebounding skills that we lost last year.”

In addition to his work on the glass, Brown has another role to fill this year as the “old man” on the roster; the graduate student is the only scholarship player in his final year of eligibility.

But it’s for more than just his age and time in college that Brown has the ear and respect of his teammates.

“People say he’s one of the best leaders, if not the best leader we’ve ever had,” Giannini said. “He has the strength, toughness, experience, unselfishness and understanding of his role.”

Brown spent the offseason keeping the team together and holding events like a Memorial Day cookout at his apartment, where the team bonded and found out who’s the best cook (Memphis transfer Pookie Powell).

Though holiday barbecues might not sound like the most stressful environment, Brown knows that it’s his role as a leader that he’ll have to focus on--even more so than grabbing all of those rebounds.

“I would say it’s a bigger challenge off the court because as the leader, as the captain I have to be a role model for the other players on the team,” he said. That means no complaining about calls, no hanging his head when things go wrong: “I have to be tough for the rest of the team, tough for the coaches and tough for the fans that come to the game.”