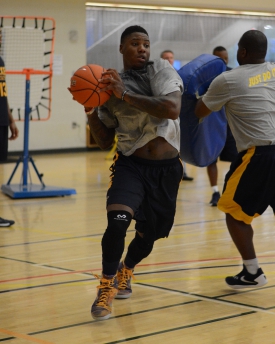 Kazembe Abif (above) is one of five forwards on the DU roster with significant D-I experience. (Photo: Josh Verlin/CoBL)

After sitting out the entire 2014-15 season with a torn ACL, Drexel grad student Kazembe Abif is ready to get back on the court and play out his final season of eligibility.

The 6-foot-7, 220-pound power forward is part of a deep group of big men on the Dragons’ roster, and though there’s a lot up in the air over the next five-plus weeks until the season begins, he’s just excited to be back on the court.

“I’m feeling good,” he said on Friday, before the team’s first practice of the year. “I'm healthy, I’m just ready to go, ready for the season to start.”

Abif has struggled with injuries over the last few seasons.

He missed the end of his junior season with a hand injury suffered in practice, and then tore his ACL in April of 2014 in individual workouts. Like with the majority of ACL injuries, Abif was forced to sit out a full year--but the early injury meant he was able to start working out by January, and instead of rushing back to be ready for a season he was able to take his time with his rehabilitation.

“I got cleared in the middle of last season,” Abif said. “But I still didn’t feel comfortable, so I didn’t play at all. But now that I got a full year in April and then I had the summer still to rehab and still work out, my knee feels real good now.”

Dragon’s head coach, Bruiser Flint, says that Abif has taken advantage of his time off by staying in shape and building up his body.

He’s done well,” said Flint. “I think he’s done a good job of really getting himself in shape and I thought he did a really good job of taking advantage of the time off.”

Even after multiple injuries, and sitting out for a year-plus, Abif is still confident in his game--to the point where he’s making some fairly hefty claims about the kind of year he thinks he might have.

In practice on Friday, Abif certainly looked like he was very much near, if not at full strength, showing plenty of bounce during drills.

But he’s far from guaranteed to play 30-plus minutes per game this year, with a number of other young forwards who’ve either already played big roles for the program or look like they’re ready to this year.

Juniors Mohamed Bah and Rodney Williams were productive players for the Dragons in their sophomore seasons. Bah, a 6-9 forward/center started all 30 games last season, scoring an average of 3.9 points and 4.6 rebounds per game.

Williams, a 6-7 power forward, averaged 8.2 points per game but raised that average to 9.0 ppg in conference games. The forward from Richmond, Virginia, also averaged two blocks and seven rebounds per game.

“(Mohamed) and Rodney are juniors and then the two freshman last year who are sophomores now, both of them got playing experience, so it’s going to be a lot of competition for playing time,” Abif said “Me, personally, I’m not really too concerned with playing time or minutes, I’m going to be out there a lot.”

Bah shares similar feelings about splitting minutes and playing in a rotation this season.

"We need everyone,” said Bah. “When you talk about basketball, you need everyone, it's not just one person. I don't mind (sharing minutes). We need to win.”

According to Abif, Flint’s message to them has been to compete hard against in each other in practice, and to make each other better, not giving away any roles just yet.

With the return of Abif to the lineup, the Dragons will have depth at forward, something they didn’t always have last season. After an 11-19 season and a 9-9 record in CAA play, the Dragons are hoping this depth will help them improve from last year.

“I feel like we’re more talented right now from one through 13, but we’ve just got to put everything together and get the ball rolling,” Abif said.