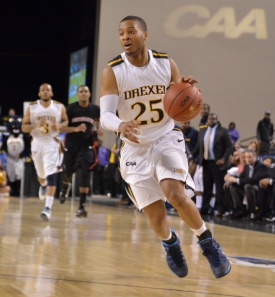 Major Canady (above, during the 2013-14 season) missed all of last year with a broken ankle suffered in the preseason. (Photo: Mark Jordan/CoBL)

Bruiser Flint will have a decision to make by the start of the season – and that in itself is good news for Drexel.

Flint will have to choose a starting point guard for the Dragons, selecting between three candidates in Rashann London, Major Canady and Terrell Allen. After having a roster depleted by injury and often being forced into using seven-and eight-man rotations last season, the ability to have an open competition is a satisfying sight for Flint.

“Everything will come out in the way they play,” said Flint, who is entering his 15th season as Drexel’s head coach. “The best guy will be the starter, that’s the bottom line. Whoever does the best out there, running the team, playing D, that guy will be the starter. You know, just honestly the whole thing is, I’m just glad I’ve got some options, that’s the way I look at it.”

Two of those options – Canady and London – have both already spent considerable time as Drexel’s starting floor general.

As a freshman during the 2013-14 season, Canady worked his way into the Dragons’ starting lineup by midseason. In that campaign, Canady managed the offense and averaged 2.1 points in 16 minutes per game, while recording 27 assists on the season to 17 turnovers.

Canady was poised to become a larger part of Drexel’s offense last year, but an ankle injury he suffered in late October sidelined him for the entire season. The redshirt sophomore said the hardest part about being sidelined was watching the Dragons lose with limited healthy bodies.

Glad to be back on the floor, Canady said he’s more focused about returning to the level of play he was at prior to the injury than winning a job.

“I didn’t really play in game action since March 2014,” he said. “So right now, I’m focusing on remaining healthy and getting my confidence back. Everything else will play itself out. (Bruiser) knows what he’s doing. He’s going to put the people out there that will make us the best.”

Once Canady went down, the keys of the offense were turned over to London. Forced into action, the Roman Catholic product had the usual first-year highs and lows and handled the role well considering the situation.

Starting in all 30 games as a freshman and averaging 30.3 minutes in those contests, London was fourth on the team with 7.0 ppg, but had 55 turnovers to 47 assists. It was a unique position for London not only because he was a freshman, but because he was never his team’s full-time point guard at Roman, sharing duties with multiple others including Shep Garner, Traci Carter and Tony Carr.

“All of a sudden he becomes the primary ball-handler, he’s got to run the team, it was hard for him,” Flint said. “But I will say I thought the kid really worked hard this spring and summer and so hopefully he’s better, by having a year in his belt, he played 30 minutes per game, so he’s going to be a little more comfortable out there, know what’s going on, so that’s just going to make him better himself.” 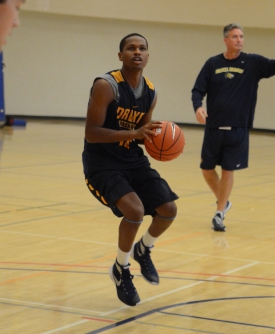 When asked to grade his season, London was tough on himself, giving his freshman campaign a C. He said: “I played well earlier in the season and then towards the end of the season I had kind of like derailed a little bit, I guess from fatigue and stuff like that.”

That’s understandable and also should not be an issue for Drexel this season, as, in addition to Canady and London, Allen joins the mix in the backcourt.

The team and level has changed for the 6-foot-2, 180-pounder from DeMatha Catholic, but it’s not the first time Allen has had to battle for minutes. At DeMatha, Allen said he was constantly vying for minutes with other point guards including recent Temple commit Alani Moore.

“I’m used to it, because I’ve had to compete for everything I do,” Allen said. “We had good competitions in practice and workouts.”

Allen noted he’s just going to listen to coaches and teammates as much as he can, and said he understands he may have to wait his turn to get on the court. But he will likely get a shot at some point this season, as will Canady and London.

Lineups with a combination of point guards are a probability, and Flint made it clear that the competition is not going to stop after he names a starter for the season opener.

“You outplay the guy that’s in front of you, and you’re going to be out there,” Flint said.“There’s no slots -- that’s what you guys do, that’s what the media guys do -- they put this thing out there and now everybody thinks well, if this guy doesn’t start, then something must be wrong, because that’s what you’ve done. Everybody knows here it’s an open competition and the best man wins. And that’s the way I’ve always been.”