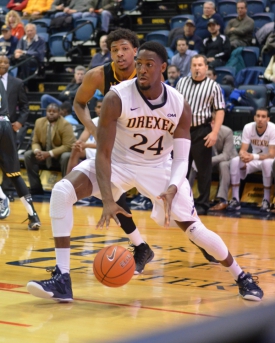 Junior forward Rodney Williams (above) is one of Drexel's leaders in 2015-16. (Photo: Josh Verlin)

The athletic trainer’s room at Drexel has been busy the last few years, but the Dragons’ run of injuries this past season bordered on ludicrous. After losing two projected starters before the season began to knee and ankle injuries, various other in-season ailments limited Flint to as few as seven scholarship players for a few games, and no more than eight and nine throughout most of the season.

A home loss to Division II University of the Sciences in December kicked off a seven-game losing streak that was undoubtedly the low point of the season, but the return of a few key players in January led to a six-game February winning streak that salvaged some measure of respectability. One key transfer will certainly make things a little more difficult this year, but as long as the Dragons stay mostly healthy, they should be much deeper this year--and thus much more competitive.

Despite the fact that he wasn’t fully recovered from a torn ACL suffered five games into the 2013-14 season, Lee had the best season of his college career, finishing fourth in D-I hoops in scoring (21.4 ppg) while shooting nearly 44 percent from the floor and 38.5 percent from 3-point range. It turns out that was the swan song for the 6-foot-6 wing in West Philadelphia, as he will go the graduate transfer route and play out his final year of eligibility on a national championship contender at Louisville. If he stayed in West Philadelphia, Lee had a chance to cement his legacy as one of the best players in program history--instead, he’ll chase his NBA dreams in the ACC. Tough to blame him.

To help offset Lee’s loss, Flint adds two new faces to his backcourt, and at least one of them figures to be a major piece right away. Fields spent the 2014-15 on the Dragons’ sideline as he took an NCAA-mandated redshirt season after transferring from Utah following a freshman year where he averaged 3.3 ppg and 2.1 rpg in 7.5 mpg. The 6-foot-3 lefty showed in practice that he’s a talented scoring guard capable of creating and hitting tough shots, and he could end up being one of the featured pieces in this offense as a Chris Fouch-esque offensive player who can get buckets in bunches.

Allen is the only newcomer this year, but the 6-2 point guard comes out of one of the nation’s premier high school programs in DeMatha (Md.) Catholic, where he followed in the footsteps of the likes of Victor Oladipo and numerous other high-major NCAA (and a few NBA) products. Allen certainly has some catching up to do behind two point guards with more experience in Flint’s system (see below), but the Drexel staff is very high on him and it wouldn’t be surprising to see him carve out a role as a freshman.

The first big injury of last year occurred just after the end of the 2013-14 season, when it was announced last April that Abif tore his ACL and would miss the entirety of what would have been his senior season. After sitting the year out and rehabbing his knee, Abif is back to team with Williams to lead a frontcourt that might not be the most talented that Flint has ever had but will certainly be one of his deepest; for now, we’ll give him a starting spot due to his 7.2 ppg and 6.6 rpg averages in 2013-14.

Williams, one of just two locks to be in the starting lineup, is the most offensively talented of all of Flint’s big men, with a more than serviceable hook shot and solid footwork that (combined with his long arms) he uses to pivot around opposing defenders for layups. While the 6-foot-7, 200 pound forward is the most likely Dragon to burst out for a big game, he also needs to be more consistent: though he had eight double-digit scoring outings last year, he also scored fewer than five points on five occasions. 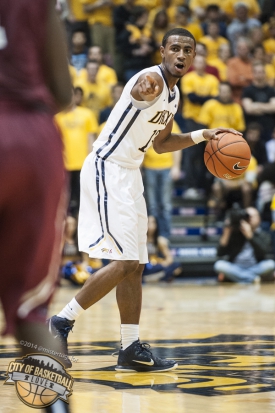 Of all the frontcourt/backcourt groupings in the City 6, figuring out who’s going to start in the Drexel backcourt might be the toughest of all. Of the six guards in the DU backcourt, five of them will have a legitimate argument to earn a starting role, and there the only guarantee is that whoever’s in the lineup on Nov. 13 won’t stay there for long if the production isn’t there. The only real lock to start on opening day anyways is Allen, a 6-7 wing and the only scholarship senior on the roster; he’s accumulated 843 points in his DU career, but his shot selection often leaves much to be desired, as his career 35.8 percent shooting would attest.

It’s the other two sports that are much more up for grabs; no matter who gets the starting nods, at least two Dragons with starting experience will be coming off the bench, and that number could be as high as three or four. For now, we’ll give one starting guard spot to Fields; the Utah transfer should be the best pure scorer on the team and has very good size for an off-guard, and he’s also in his third year of college. Who’s alongside him is even more up in the air; we’ll stick for now with London, who started all 30 games last year after the presumed starter, Major Canady, went down in the preseason with a broken ankle that sidelined him the whole year. London wasn’t stellar as a freshman, but he had some very good stretches and could certainly grab hold of the role for the next few years with a big step forward as a sophomore.

No matter who starts and who comes off the bench, the Dragons will have plenty of experience in the reserve ranks, and several players who will see near-starters’ minutes no matter their initial role. In the above group is one player who started all 30 games last year (Bah), another who started four games and played big minutes in many others (Mojica), and a third who was in line to start last year before an injury ended his season before it began (Canady). Then add on Myles and Williams, both sophomores who got more than a taste of Division I action a year ago.

If this is how the bench looks to begin with, expect to see Mojica and then Canady get off the bench first, with Allen playing somewhere around 8-10 minutes to begin with. Bah (or Abif) would be the third big man, but with the physical style Flint prefers defensively, he won’t hesitate to throw Myles and Williams out on the court if his top three get into foul difficulties. Assuming they can stay mostly healthy, there’s a lot to like about this group from a depth perspective, and there’s enough bodies on the roster that Flint should be able to find eight or nine who are the most consistent and focus in on his rotation as the season progresses.

Three Games to Watch
1. vs. Penn State (Dec. 19). This is the second year of an “off-campus” series between Drexel and Penn State, which began last year with Penn State’s “home” game at PPL Arena in Allentown. The return game will be played much closer to a campus this year, with the Nittany Lions making the trip down to Philadelphia to duel with the Dragons at the Palestra. Last year, despite Drexel’s 2-7 record and Penn State’s 10-1 mark when they met, DU put a good scare into PSU in a 73-68 loss. An upset over the high-major program is definitely not out of the question this time around.

2. vs. Penn (Dec. 22). West Philadelphia’s two Division I programs have met two dozen times over the last 100 years, but this will only be the second-ever time that the Quakers will venture up 34th Street to the Dragons’ lair. The only problem with the timing of this game (and Penn State) is that it comes over winter break, meaning the student sections are not going to be nearly as exciting as they would if the game were two weeks earlier. But city bragging rights games are always fun, especially when it’s in the same neighborhood.

3. vs. Hofstra (Jan. 30). Drexel was embarrassed in two games against the Pride last year, losing 86-58 at Hofstra and then getting blown out 81-57 in their own gym. And Hofstra will be very good yet again this year, behind the Philly duo of Juan’ya Green and Ameen Tanksley, plus sharpshooter Brian Bernardi, all transfers who came to the Long Island school to play for head coach Joe Mihalich, another Philly native. But Drexel will be playing for pride of its own after those big losses last year, and if the Dragons want to make noise in the CAA, they’ll need to pick up wins in games like this one.

Three Keys to Success
1. Stay healthy. Flint and his coaching staff might want to consider making knee pads, elbow pads and helmets mandatory for preseason practices, just to be extra-careful. Every team has its minor issues, and if anybody on the roster goes down, Drexel has the depth at both guard and forward to be able to survive; a few major injuries like last year, though, and quickly that depth goes right out the window. After three straight years of losing major players to a season-ending injury within the first few games of the year, the Dragons’ luck would have to change eventually...right?

2. Replace Damion. After two seasons proving himself as one of the better young players in mid-major basketball (and a third spent on the sideline with a torn ACL), Damion Lee emerged on the national scene last year, proving he could put a team on his back and carry them, playing 35-plus minutes with regularity and often bailing his team out in end-of-shot-clock situations. While it's going to take a number of players to chip in to make up for his scoring total, what Drexel will need to find is who's their go-to scorer in late-shot-clock situations, whether that's Allen, Fields, Williams or someone else.

3. Develop chemistry. This could have been titled “develop a rotation,” but the general principle is the same: the Dragons need to settle into some kind of roles. No matter what, there will be a few Drexel players with starting experience coming off the bench, which can sometimes be a tricky situation if not handled correctly. But Flint seems to have his players bought in as a team, and as long as those reserves are getting their chance to play it doesn’t look like it will be too much of a problem. If all clicks, it will mean this is a super-deep and super-dangers Drexel squad that shouldn’t miss a beat when it goes to its second unit anywhere on the court.