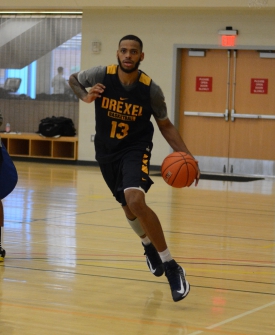 With one of the greatest scorers in the history of Drexel basketball gone, the Dragons will need someone to step up in the points category.

After putting together the fourth-highest scoring average in the country, Damion Lee and his 21.4 ppg are off to Louisville, using his last season of eligibility to try and win a national championship and boost his NBA stock.

It’s certainly not fair to compare any incoming transfer to one of the best scorers in the country, but there’s no denying that former Utah guard Ahmad Fields will provide a nice boost to the Drexel lineup in his first season of eligibility.

After sitting out last season, the 6-foot-5, 195-pound redshirt sophomore from Washington, D.C. native is raring to go.

“It was a little hard,” he said about his year off, “but I did it for a reason, and I’m ready for the season.”

While Fields knew full well that in transferring to Drexel he would have to wait his turn, that didn’t make the experience any easier--especially considering the season the Dragons had.

Ravaged by injuries, Drexel struggled to a 11-19 record, including a 9-9 mark in CAA play. At times, head coach Bruiser Flint had no more than seven healthy bodies to go with, including four freshmen.

And there wasn’t anything Fields could do.

“When you’re not contributing and your team’s going through struggles, you can’t say anything, you’ve got to just sit back and let it happen,” he said. “That was the hardest part for me, not being able to be there and put my two cents in how I felt and help my team out.”

One of five scholarship guards with significant Division I experience on Drexel’s roster, Fields will jump right into a rotation that will feature redshirt senior Tavon Allen as well as sophomores Rashann London, Major Canady and Sammy Mojica; freshman Terrell Allen, a point guard, figures to see minutes as well.

It certainly looks like he’s going to have a much bigger impact than their last high-major transfer, Freddie Wilson, who averaged just 4.3 ppg in 49 games as a Dragon after transferring over from Seton Hall.

“I think (Ahmad) has a chance to be an all-league player at this level,” Flint said. “But he’s going to take his time, and I don’t want to put too much on him. I just want him to ease his way in and be able to be the player that we think he can be.”

There’s no denying that Fields has talent.

Before coming out of Virginia’s Massanutten Military Academy in 2013, he had options to attend several high-major schools, including Colorado and Southern Cal, but chose to go to Utah.

In Drexel’s practices last year, his ability to get to the basket and size for his position made him stand out, though with Lee and others on the team he was still clearly feeling his way around.

This year, he’s one of a few options who could lead the Dragons in scoring on any particular night this year, but he’s by no means setting out to do so.

“I feel like everybody’s going to contribute,” he said. “I don’t feel like I’ve got to carry the team...if we all put in then we’ll be fine, we don’t need one person trying to take 20, 30 shots or anything like that.”

Drexel’s season gets underway on November 13 at city rival Saint Joseph’s, and whether Fields is in the starting lineup or not, he’s sure to see plenty of action against the Hawks.

Either way, getting that chance to remove his warm-ups for the first time in nearly two years is going to feel good.

“I think about it all the time, I’ve been waiting for it,” he said. “I’m looking forward to it.”