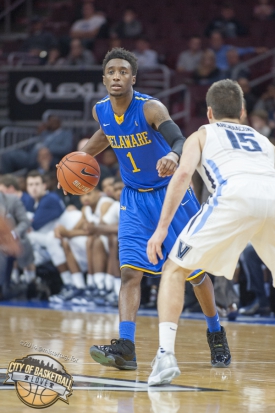 For almost the entirety of his team’s non-conference schedule last season, UD head coach Monte Ross was left with a starting lineup of underclassmen.

The backcourt of sophomore Cazmon Hayes alongside freshmen Kory Holden and Chivarsky Corbett were thrown into the fire, buoying the Hens until upperclassmen Kyle Anderson and Marvin King-Davis returned against Temple with an 0-7 record.

Holden did more than buoy his team in its first win against St. Bonaventure in late December. The 6-foot-2 Maryland guard scored a season-high 27 points on four 3-pointers en route to a long-awaited Delaware victory.

Ross’ freshmen led the Blue Hens in scoring in 36 percent of their games, a statistic that is certainly surprising after Anderson and King-Davis returned healthy. Holden finished as UD’s second-leading scorer with 12.4 points per game, while Corbett added a steady 8.8 ppg. There were freshmen mistakes, and plenty of them. However, Holden and Corbett, as well as fellow freshman Anthony Mosley, were keen on disregarding the excuse of being inexperienced.

Delaware was able to right the ship after an 0-10 start; the Blue Hens battled down the stretch, winning four of their final five games to capture a 9-9 CAA record and a bye into the quarterfinals of the CAA tournament. It was an impressive run for a team that was surrounded with youth, injuries, and Ross’s contract ordeal.

Now in their sophomore campaign, the duo of Corbett and Holden will hope to build off the maturity in which they gained down the stretch of last season’s CAA schedule. With the graduation of UD’s all-time 3-point leader, Kyle Anderson, Ross and his coaching staff will have to rely even more on the young backcourt to score. This time, though, they will have a season under their belts.

“I would say experience is the best teacher,” Ross said. “We had a bunch of guys last year who had not played and a lot of guys who got better toward the end of last year. I think that is very, very helpful.”

The experience, according to Ross, has already shown throughout offseason workouts and at the start of practice. Holden and Corbett now have had an entire offseason in college and know what to expect when the Hens start their season at Delaware State on Nov. 13.

“All our key guys are older guys now," Ross added. "They were so green and young last year, they didn’t know anything. Now, we call out stuff and they know what we’re doing. It’s been in practice, it’s also been off the court – how we do things and what we expect from them. Again, it’s a lot easier to not have to teach them every single thing and we don’t have to do that anymore.”

There will be plenty of experience for Delaware this season, even if the roster does not show it. Hayes returns for his junior season after scoring 11.4 points per game as a sophomore.

Down low, King-Davis, a 6-foot-7 senior, will partner with juniors Barnett Harris, Devonne Pinkard and Mo Jeffers in an established frontcourt, while it looks like sophomore Chivarsky Corbett will slide into the starting lineup after averaging 8.8 ppg a year ago.

Corbett and Jeffers were the only Blue Hens to appear in every game last season, while Holden missed just one game.

“We’re still young,” Holden said. “But I feel like we have a lot of experience. Me and Chivarsky got a lot of minutes last year and that is going to help out. The biggest thing is to keep working, getting better. We understand we’re older now, but we also know how far we had to come last year.”

Delaware will try to improve upon a season that ended with a heartbreaking defeat in the CAA Tournament to eventual champion Northeastern. Based on how they ended last year’s campaign and the game experience in which they bring back, the Hens feel as if they can be in the upper echelon of the CAA.

“Yeah I do feel like we’re an older and experienced team,” Corbett said. “Last year, toward the end of the season, you could feel that we had that much experience. I think we can build off that and I think we can be one of the better teams in the conference.”