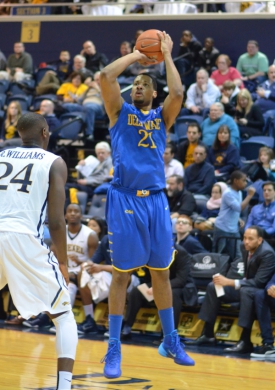 As the oldest player on the roster, and a returning starter as well as captain, Marvin King-Davis has had to take on more responsibility than the average Delaware player.

He’s found a good way to sum up his what it’s like.

“I’m like the dad of the team,” he said while shaking his head and laughing after a workout last month.

The fifth-year forward plays the role of mentor on the practice court and in the locker room, but once the Blue Hens tip off their season on Nov. 13 against Delaware State, King-Davis will be looked at as the team’s top post presence.

A 6-foot-7, 230-pound forward, King-Davis is coming off a junior season in which he averaged 9.7 points and was Delaware’s leading rebounder, grabbing 5.7 boards per game. King-Davis averaged career highs across the board last season. Those numbers came as a result of more minutes and the coaching staff wanting to feed King-Davis on offense.

“It seems like Marvin has been here forever,” Delaware coach Monté Ross said. “He definitely knows what we want, and he knows how to be successful in games. He had a different role last year in that he was a guy that we went to – he never had that role before. So he’s comfortable in that role.”

The fourth-leading scorer on Delaware a season ago, King-Davis was limited to action in only 23 games due to a hamstring problem that hampered him early in the year. After scoring 11 points in the season opener against Liberty, King-Davis did not see the court again for a month. He missed six games in that span – all were Blue Hens losses as they started the season 0-10.

King-Davis was limited to 20 minutes or less in Delaware’s final three nonconference games, appearing in just two minutes against Robert Morris – the Blue Hens final test before conference play. Once Delaware started facing CAA opponents, however, King-Davis was much healthier, made an impact and the team starting picking up some wins.

The Richmond, Va. native scored 14 points on 6-of-9 shooting in Delaware’s conference-opening win against St. Bonaventure. King-Davis then went on an eight-game stretch in which he averaged 13.1 points and 6.3 rebounds per game. This included a career game against James Madison when King-Davis had 31 points, knocked down 11 of 14 free throw attempts and corralled eight rebounds.

King-Davis attributes that strong stretch to being healthy. And as long as he avoids the injury bug this year, he doesn’t see why he can’t put up even better numbers.

“I struggled coming back (from the injury),” King-Davis said. “But by the end of the year, I was playing more and playing better. And I feel like that will carry over to this year.”

Something else that King-Davis carries with him into 2015-16 is the role of captain. The only difference is who is alongside him in the middle of huddles.

Last season that was Kyle Anderson, Delaware’s leading scorer and one of the most prolific shooters in program history. This year it’s sophomore point guard Kory Holden, who made 28 starts last season and was second on the team with a 12.4 points per game average.

“It’s like Kyle last year,” Holden said of King-Davis. “We all look up to him and go to him for advice. I can definitely see why he said he feels like the dad.”

It’s a role King-Davis seems to have embraced, and he knows that he used to be the one with all the inquires – about basketball and college life.

“Let’s say we’re playing defense. Someone may not know exactly where to be and they don’t want to ask the coach, so they’ll just be like ‘Yo, am I supposed to be there?’ And I’ll just point,” King-Davis said of his on-the-court help.

“Outside the court…” he trailed off, laughing.

Some things stay in the family.