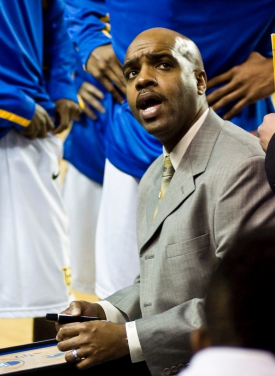 Delaware coach Monté Ross and the Blue Hens return all five starters from a year ago. (Photo: Mark Jordan/CoBL)

After winning the program’s first-ever CAA Tournament in 2014, it was expected that last year would be a little rougher for Delaware. Five freshmen and four sophomores formed the core of a squad that needed to replace one of the program’s all-time greats in Devon Saddler, plus a more-than-solid supporting cast of Davon Usher, Jarvis Threatt and Carl Baptiste. Then, the only senior on the team, Kyle Anderson, missed the first seven games with a broken hand, and things were ugly for quite a while under a coaching staff that was working without a contract beyond the season despite the prior year’s success.

But after a 1-13 (0-3 CAA) start to the season, the Blue Hens righted the ship. They closed the year going 9-6 against the remainder of their league, and a number of those young players started really asserting themselves. And after the season concluded, Ross and his assistants got their contract extension. So now, with a much more optimistic outlook, the Blue Hens head into an uncertain CAA in 2015-16 with high hopes.

Though he’ll go down in Delaware history as the 3-point sniper on the Blue Hens’ NCAA Tournament team alongside high-scoring guards Saddler and Usher, Anderson played a big role for the program’s future, mentoring and guide for many of his younger teammates during his senior season and imparting as much knowledge on them as possible before his departure. And though his 3-point shooting (31.8 percent) wasn’t what it was as a junior (37.6 percent), many of his numbers--rebounds, assists, foul shooting--were the best of his career.

There will be one new face in practice--George Washington transfer Darian Bryant, who will be eligible next year, but other than that it’s a whole team of returnees for Ross and company.

After starting a combined 52 of the 54 games they played last year, King-Davis and Jeffers are near-locks to see their names in the starting lineup come November. King-Jeffers, now a redshirt senior, is the most talented of the Blue Hens’ frontcourt pieces,

Corbett only started one game as a freshman, but it would be a surprise to see anybody else take Anderson’s vacated spot in the starting lineup. The 6-foot-7, 200-pound wing forward was easily the diamond in the rough in the CAA’s rookie class, coming out of Tampa, Fla. to average 8.8 ppg while shooting 39 percent (46-of-118) from 3-point range. As he continues to improve his ball skills and his perimeter defense, he could become the biggest matchup nightmare in the league by his junior and senior seasons.

On the interior, King-Davis (6-7, 230) is their go-to option in the post, with several ways to score the bucket around the rim including a nice hook shot that he’ll utilize rather often. He’s steadily increased his production in each of his three years on campus, and if he can stay on the court more than the 23 minutes he played last season, there’s no reason his numbers won’t take another leap forward. Jeffers (6-9, 240) provides size in the middle and does the dirty work on the glass, and was productive last season in his first big minutes as a Blue Hen. 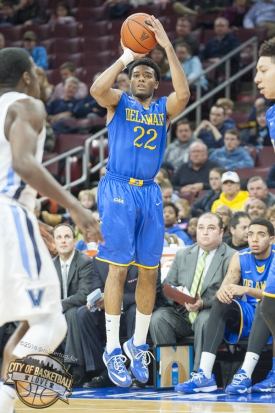 Cazmon Hayes (above) is part of a talented group of Blue Hens guards who will be together the next two years. (Photo: Josh Verlin)

The last great Delaware guard, 2014 graduate Devon Saddler, hailed from the state of Maryland, and it looks like the Blue Hens staff struck gold in Terrapin territory yet again with Holden. A native of Salisbury, located on the Eastern Shore, Holden earned the starting job at point guard from the get-go and quickly emerged as one of the best young players in the conference. The 6-foot-2 guard’s best 10-game stretch came in December and January, when he averaged 15.7 ppg, 5.2 apg and 3.6 rpg; if he can put up those kinds of numbers as a sophomore while cutting down on his turnovers (3.3/game as a freshman), he’ll make Ross a very happy coach.

Joining him in the backcourt for the second year in a row is Hayes, a 6-4 junior and native of Charlotte (N.C.). Though Hayes took a few too many 3-pointers (153) for someone who made just 32.7 percent from beyond the arc, he converted at a decent 47.7 percent clip on 2-point shots; with Anderson gone, Hayes more than anybody else on the team needs to improve at picking his spots and becoming a more efficient scorer. Still, the duo’s athleticism and scoring ability will give the CAA fits for the next two years.

The Blue Hens’ bench has already taken one hit this year with the news that sophomore forward Eric Carter will miss the season with a torn ACL. By all accounts, Carter had a strong summer and was expected to become the third big man in the rotation after King-Davis and Jeffers, but now it’ll likely be a combination of Harris and Johnson that will have to find ways to be productive when Delaware’s top two big men are on the bench.

Delaware’s coaching staff was hoping to bring in one guard in the 2015 class, and they had a very good one committed in Eli Cain; the uncertainty surrounding Ross’ contract last year gave Cain cold feet, however, and he’s now a freshman at DePaul. Holden and Hayes should get used to playing some pretty big minutes, as the only other guard on the roster is Mosely, who turned the ball over nearly a third of the time he was involved in the action. Pinkard, a 6-6 wing from Lancaster, was expected to take a big step forward but was ultimately outplayed by Corbett.

Three Games to Watch
1. @ Temple (Sun., Nov. 29). If the Blue Hens want to make a big early-season statement that this is a much-improved ballclub, their first opportunity comes in Philadelphia against the Owls. Temple’s no slouch, to be sure, with seniors Quenton DeCosey and Jaylen Bond joined by some very talented youngsters. But it may take Fran Dunphy’s club some time to adjust to the loss of starting point guard Will Cummings, and if Bond gets in early foul trouble, the upset could be there for the picking.

2. vs. Drexel (Thu., Feb. 11). One of the top rivalries in the CAA is that of Drexel and Delaware--no matter how good or bad the teams are, the two always bring out the best in each other in their pair of matchups each season. They split the matchups last year, with Drexel winning 66-62 at Delaware before its injury problems really mounted; it was a 58-44 Blue Hens win the second time around. Both programs should be stronger this year, with the Dragons getting healthy and the Blue Hens getting experienced

3. vs. Hofstra (Sat., Feb. 13). Suffice to say, this is an important homestand for Delaware as the season winds down, and given the nature of the CAA there’s always late movement in the standings. The Pride are the likely preseason conference favorites, with two of the best players in mid-major basketball in guard Juan’ya Green and forward Ameen Tanksley, and head coach Joe Mihalich has built up a very solid supporting cast around them. Last year, Hofstra took both meetings by double figures, but don’t expect it to be that easy for them this time around.

Three Keys to Success
1.  Let Holden take over. Ross let his freshman point guard have a good deal of freedom, as Holden led the team in usage rate (25.3 percent) as a freshman, meaning one-quarter of Delaware’s possessions ended with Holden taking a shot, dishing out an assist or turning it over. That last area was a bit of a problem for the 6-2 guard, as he gave it away 95 times, or 3.3 times per game; if he can get that number under 80 and continue to improve his scoring (12.4 ppg) and assist (5.0) numbers, he’ll start to get recognized as not just one of the best young guards in the league but in mid-major basketball in general.

2. Develop one more consistent young forward. After King-Davis and Jeffers, no Delaware forward averaged more than Carter’s 1.4 ppg. Ross doesn’t need another demand-the-ball post right away, but he could certainly use someone to come off the bench and give his team six points and six rebounds in 20-25 minutes, as opposed to just throw in players on a nightly basis and seeing who plays well. The likely suspect would have been Carter, but his knee injury means that fellow sophomore Skye Johnson has a chance to impress and see a big uptick in minutes if he sticks to the fundamentals.

3. Force turnovers. Delaware has not been an incredibly efficient defensive team over the years, ranking an average of 221st in the country in that category during Ross’ nine-year tenure, according to KenPom. They’re not suddenly going to end up in the top 100 this season, but a solid step up from the 1.06 points per possession they were allowing combined with the expected increase in offensive efficiency that comes with not having a freshman at point guard should result in a nice improvement in the win column. The biggest issue for Delaware defensively was that they forced turnovers on just 15.6 percent of opponent possessions--that was the 337th-worst mark in the country.