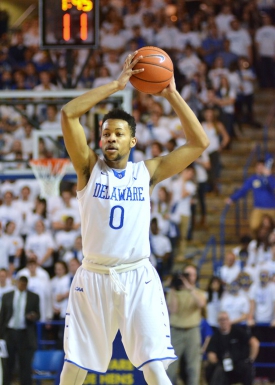 Chivarsky Corbett (above) emerged during his freshman year as a player to watch in the CAA. (Photo: Mark Jordan/CoBL)

Last season wasn’t the most impressive for Delaware--the way it started, that is.

While the Hens’ final mark of 10-20, 9-9 in Colonial Athletic Association play wasn’t all that disastrous, the bulk of those 20 losses came in the outset of the season, and it took Delaware until the second-to-last day of the 2014 calendar year to win its first contest.

Over the course of the final two months, however, the Blue Hens saw steady and encouraging improvement from their team, and ended in the middle of the CAA pack despite the lousy start.

Chivarsky Corbett, a sophomore wing for Delaware who played in every single game last season, didn't need quite as long to get going.

After a 2-for-11 shooting performance in his first Division I game, Corbett quickly acclimated; he would hit the double-digit mark the first time in game number four and repeated the feat a dozen more times, peaking with a 21-point outing in a loss to Robert Morris in December.

"I feel like I got much better by the end of the season,” Corbett said. “Beginning of the season, I didn’t know quite what to expect. Everything was much faster, players were stronger. As I started to play, it got much easier.”

Having opened the season not fully healthy, the 6-foot-7, 200-pound Corbett gradually developed into the talented player UD had been looking for out of their freshman wing. Many of his teammates saw him grow into a more comfortable position on the floor, and have reason to believe he’ll grow in his second season on campus.

“He was not healthy to start the year last year,” head coach Monte Ross said. “He missed all of preseason workouts, all of preseason practice until the week before our first game. So I think this is valuable practice time for him. Last year, after the season was valuable postseason work for him. And I think he’s benefitted from all the work he’s got. He’s a guy that has been through it now and we expect him to take that next step.”

One area where Corbett needs to continue building off of his freshman year success is his outside shooting. In his debut, Corbett shot a measly fourteen percent from beyond the arc, but by the end of the season he had an overall 3-point mark of 39 percent.

Last year, Corbett and the rest of the Blue Hens had the luxury of one of the league’s more prolific scorers in Kyle Anderson to carry most of the burden when it came to a shooting presence on the floor. Anderson led the Hens with 14.4 points per game in his senior season, but is the only starter leaving from last year’s squad.

Corbett is expected to take that spot in the starting lineup.

“We’re losing Kyle who was one of the best shooters in Delaware history,” Corbett said. “But I feel like I can help fill that void. My role should be much bigger this year.”

Corbett averaged 8.8 points per game in about twenty-four minutes per game as a freshman at Delaware. The bulk of Corbett’s scoring came from his shot, but his teammates expect him to be more of a threat on the offensive end.

“I think he’ll be more aggressive,” said Delaware point guard Kory Holden. “Last year he liked to spot up and shoot, and I think we’ll need him to put the ball on the floor and go get his own if he needs to.”