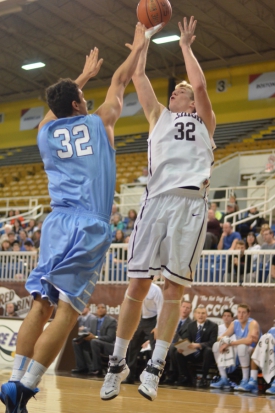 Tim Kempton (above) and Lehigh are one of 350+ teams preparing for the 2015-16 Division I hoops season. (Photo: Josh Verlin/CoBL)

With exactly 42 days until the official start of the college hoops season, Division I programs across the country started practice Friday. In six weeks, college basketball will be back.

Until then, CoBL will prepare you for the upcoming season with extensive looks at the 10 D-I programs in our coverage area, the conferences they play in and also coverage of D-II and D-III schools in and around Philly.

On each feature day for a school or conference, we'll feature an in-depth look at that program or league as well as run several feature stories; over the course of the preview, we'll have more than 100 pieces that will fully prepare our readers for what they'll watch over the following four amazing months.

We're still finalizing what the last week of preseason coverage will look like, but here's the next five weeks:

Friday, October 9--Lehigh Preview Day
-- Lehigh Mountain Hawks Primer
-- Ross continuing to excel in pick-and-roll
-- Justin Goldsborough wants to go out on top
-- Is this the year for Lehigh?