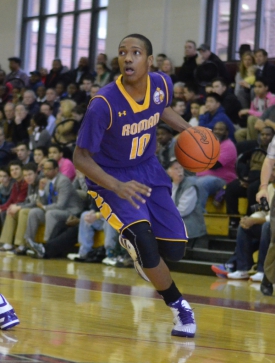 Usually when big things are happening with Roman Catholic’s basketball program it’s because students, parents and fans have come to see the talented Cahillites take the court.

Then again, the Catholic League powerhouse at Broad and Vine doesn’t usually host anything important regarding basketball on the third day of August.

There were no screaming fans on Monday afternoon, when Roman’s star point guard, Tony Carr, sat down at a table in Roman’s library, flanked by his parents. But the small crowd gathered there--Carr’s friends, family and teammates--and what he had to tell them was no less important than many of the games played on the old wooden court.

After receiving more than 20 Division I offers from high-major schools around the country, Carr revealed to those in attendance that he had made his choice, and would be going to Penn State.

“I started to look deeper into things and weigh my options a little bit heavier, I just realized that was the best place for me,” he told CoBL. “I feel like I can go to Penn State and prosper as a young man, not only on the basketball but off the basketball court.”

While there was no specific runner-up, two of the other schools presented themselves as serious options.

“I strongly considered the University of Maryland, they have a great coaching staff also, I had a good relationship with them,” Carr said. “And also Temple University, Fran Dunphy has always been a great person and...he just told me that he loved my game and wanted to coach me and I felt comfortable with him throughout the process, but I just wanted to go to Penn State.”

Ultimately, he said, the decision came down to his relationship with the Penn State coaching staff--not just head coach Pat Chambers, but associate head coach Keith Urgo and assistant Dwyane Anderson as well.

Of course, it didn’t hurt that he would get to join two former Roman Catholic teammates up in State College. 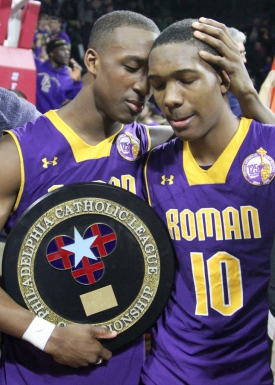 Shep Garner, who Carr played with during the 2012-13 season (his first at the school), just finished a solid freshman year at PSU in which he started 33 games and averaged 9.2 ppg. And classmate Nazeer Bostick, who along with Carr helped lead the Cahillites to the 2015 Catholic League and PIAA Class AAAA championships, committed to the school back in April.

Though Carr said Bostick never tried to recruit him to the school, his teammate and friend was one of the first people he reached out to after making his decision over the weekend.

“I just let him know that I was going to be committing, we were going to go for the same school for four years, just talked about the vision,” Carr said. “He was very excited, very excited.”

While he was certainly regarded as a talented Division I prospect early on in his high school career, Carr really saw his recruiting stock rise during an April run with Team Final on the Nike-backed EYBL in which he averaged 15.1 ppg, 4.9 rpg and 3.6 apg. Ultimately 26 schools ended up offering, including schools like Memphis, Xavier, Indiana, Miami (Fl.), Pittsburgh and more who didn’t even make the final five.

That came on the back of a junior year during which he averaged 12.6 ppg to lead Roman to a 29-2 record, and during the middle of the season Roman coach Chris McNesby began to see his point guard take the leap from “good” to “great.”

“I think little by little he started really feeling like ‘wow, I’m growing as a player,’ and it was cool,” McNesby said. “I think he just matured as a person, not to mention he grew an inch or two, and he just kind of started taking control over situations more than he did before as a young guy.”

That trio continues a solid recruiting run for Chambers and staff, following up on a 2015 class that includes another Philadelphia product in top-100 forward Mike Watkins, a shot-blocking specialist; Josh Reaves, a top-75 guard and another Oak Hill product; and a 6-6 wing forward, Deividas Zemgulis.

What remains to be seen if this momentum can carry over onto the hardwood.

After an impressive 12-1 start to the 2014-2015 campaign, Penn State finished 18-16 (4-14 Big Ten ) due to a pair of six-game losing streaks. That still represented a step forward from 16-win and 10-win seasons over the prior two years, but Carr is hoping that the days of 13th-place finishes in the Power 5 conference are over.

“I believe I can go there and change the whole landscape, with guys like Nazeer Bostick and Josh Reaves and Mike watkins and Joe Hampton,” Carr said. “I feel like we can change the whole school around make history up there and be special.”