Live in AC: 17U Notebook 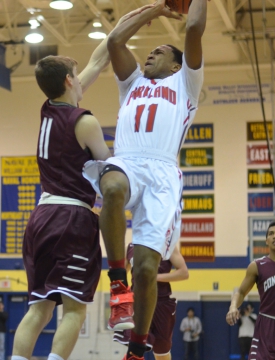 Wednesday’s portion of the event featured 17U showcase that saw AAU teams from all over the East Coast gather at the Richard Stockton University Sports Center, with tournament play starting on Thursday as hundreds of young athletes showcased their talents.

Here’s a notebook from Wednesday night and Thursday, featuring rising players in the 17U bracket:

Devante Cross (2016/G/Jersey Force)
Parkland’s Devante Cross, who has received offers to play both football and basketball at the D-I level has chosen basketball as his sport of focus.

Cross, who plays quarterback for the Allentown high school’s varsity football team will turn down an offer from Syracuse, among a number of other Division I schools, in order to pursue his dream of playing college basketball.

“I want to play basketball in college,” Cross said. “That’s what I’m sticking to and that’s why I’m out here. If I was going to play football I wouldn’t be out here running around. I’m out here for a reason and this is what I want to do.”

Cross considers himself a natural at football, whereas with basketball he had to work a lot harder to reach his current level. Lacking natural ability will often times draw people away from things they enjoy.

For the 6-foot-2 combo guard, that was hardly the case.

Basketball never came easy to him but because of that, he was drawn to it more and more.

“I wasn’t always good at basketball,” Cross said. “Even now I’m just an average player. With football, I’ve always been good at it and it didn’t challenge me the way basketball did. I didn’t really start playing at a high level until I was in eighth or ninth grade.

“I put in more hours into basketball...I remember when I was in middle school scoring two points a game. With all the work I’ve put in, it makes me want to play it even more.”

Coaches are drawn to the fact that Cross is an athletic and versatile guard. In addition to his offers, from D-Is UMBC, Central Connecticut State, Holy Cross, and Fairleigh Dickinson, he has received interest from Boston University, Delaware, George Mason and Quinnipiac.

He is yet to visit any of the aforementioned schools and is waiting for the end of the live period to visit the schools he likes and ultimately trim his list. He expects that to happen towards the end of August into the school year.

Until then, Cross will continue to do what he has always done: spend countless hours in gym, hoping to hone and one day perfect his craft.

“Hopefully I can continue to get faster and stronger,” Cross said. “I want to learn how to play smarter too. That’s never going to hurt. I’m going to keep working on the fundamentals of the game. I’m always working on layups, jump shots and really just my overall game.” --Jack Goodwillie

The elusive Division I offer is yet to happen for Dalessandro, but while he will continue to wait on that, Conwell-Egan’s big man can now breathe a sigh of relief.

The 6-foot-7 Dalessandro yielded his first college offer this week from Daemen, a Division-II college in New York. On Friday night, Dalessandro was informed he had also received an offer from Pace University in New York. While he is excited about being a wanted commodity, he views the offers as more of a stress reliever than anything else.

“It’s great,” he said on Wednesday night. “It’s a lot of stress off my shoulders. Now I know I have some schools I can go to but I’ve got to keep working hard for all the other schools too.”

The other schools Dalessandro alluded to are Maine, Fairleigh Dickinson, UMass Lowell, Radford and Brown. He added that he has also had conversations with most other Ivy League schools with the exception of Princeton and Harvard.

As for Daemen, Dalessandro is yet to visit the school's Amherst (N.Y.) campus, but hopes to soon. He has, however had multiple conversations with their scouting staff who came away very impressed after watching him on display at the Hoop Group camp.

“They liked how I played up there,” Dalessandro said. “They said I attack the backboard well and that I’m a physical kid who can play in and out of a hard match-up.

While happy, appreciative and flattered by Daemen’s offer, Dalessandro is far from finished. Most players like to use the offseason to improve upon their weaknesses, but Dalessandro does not fully subscribe to this line of thinking. Instead, he wants to continue to build upon his strength: power and precision in the paint.

“I think I need to start attacking the backboard more,” Dalessandro said. “I need more rebounds per game. I think I’m averaging about eight per game when I need to get up to 12 or 13.”

Ian Langendoerfer (2016/F/JB Hoops Coyle)
JB Hoops may have fell to Sports U early Thursday afternoon, but Ian Langendoerfer shone through as one of his team’s standout performers on the day.

The 6-foot-4 Langendoerfer showed how physical he can be, forcing turnovers on defense and picking up garbage baskets on offense. Even in defeat, he was mostly pleased with the effort him and his teammates put forth against a very good Sports U squad that emerged victorious by a score of 68-60.

“I think we played pretty physical,” Langendoerfer said. “We could have gotten up and down more. I thought we let up a lot of easy baskets on the run but other than that I thought we played pretty well and I like playing against these types of teams. It forces you to step up to their level.”

At this moment, the Honesdale native has two Division I offers, one from Loyola (Md.) and the other from UMBC.

He has already paid a visit to both schools and had nothing but positive things to say about the two, which are coincidentally less than a half-hour apart from one another. Needless to say, he is taking their interest very seriously.

“They were both nice,” Langendoerfer said. “The coaches at both schools were all very nice guys and want to help me out with everything from school to basketball. Everybody was very nice to me.

“Both could definitely be a good fit for me. I loved them.”

While he is an admitted fan of what both schools have to offer him, Langendoerfer is hopeful for more offers when Live in AC concludes. He has had contact with Brown and Lafayette and could very well make believers out of them if he continues to play well.

Langendoerfer performed his best when driving to the basket. This is something he recognizes and will look to do more of throughout the rest of the July live period.

Quick Hits
--In one of the few games on Wednesday to go to a two minute overtime period, Jonas Stakeliunas of Shoreshots Rice converted on the game winning layup to sink Albany City Rocks Orange. The 6-foot-8 Lithuania native will be attending the Hill School next fall and is very excited to play there, given the school’s track record both academically and athletically.

“I’m looking forward to more independence living at a boarding school,” Stakeliunas said. “New people and new connections should both help me academically and basketball-wise.”

As of now, Stakeliunas’ only standing offers are Mount St. Mary’s and Loyola (Maryland). Eager to play basketball, he will play out the live period before talking with his coaches and family to gauge what his best option might be. --Jack Goodwillie

--Adam Mitola (2016/Gil St. Bernard’s, N.J.) comes from a family where his father and two older brothers who all played high school basketball, but it was his brother Alex who took it one step further.

Alex Mitola was a standout player for Dartmouth from 2012-2015, transferring to George Washington as a grad student for his final year eligibility. The 5’11” guard averaged 12.4 per game in his final season at Dartmouth.

“I feel like I’m in his shadows a little bit, but he did a great job at Gil St. Bernard,” Mitola said about his brother’s high school career, the same high school he attends now. “I practice with him all the time, play with him one on one, I have learned some great things from him.”

The 6-3 guard said he is lucky to have Alex around and feels it’s developing his game. Mitola wants to follow in his brother’s footsteps by playing NCAA basketball.

--Taj Price (2016/F/Phelps School) is one of the few players in Atlantic City that is completely settled on his future destination: he will play for NJIT upon his departure from Malvern’s Phelps School where he will be attending in 2016. With the stress of a college decision off of his shoulders, Price is eager to focus all of his time and attention on fine tuning his game towards the level of competition he’ll be facing at the next level.

“It feels great,” Price said. “Now I can just focus on basketball and just playing to get better. I’ll be using this whole year to work on the things I need to work on so I can come in and play right away for NJIT.”

This offseason, NJIT joined the Atlantic Sun conference as the last remaining independent school in NCAA Division I basketball. The Highlanders will be looking to immediately compete for the Atlantic Sun crown and the addition of the 6-foot-7 Price certainly won’t hurt their cause.