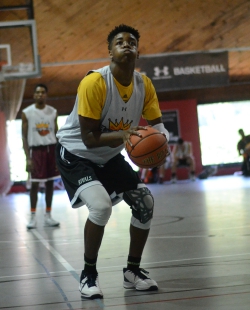 READING, Pa. -- The Hoop Group’s second elite camp of the July live recruiting periods brought several hundred high school prospects from across the country to Albright College for four days of basketball, from July 14-17, with Division I coaches able to watch the games starting on Wednesday night.

Game sets ran all day long on Thursday on 11 different courts; here’s a notebook from the camp’s third day of action:

Justyn Mutts (2017/F/St. Augustine Prep, N.J.)
Today’s afternoon session was filled hungry players leaving everything they had on the court in an effort to impress college scouts and coaches.

One player whose effort especially shined through was Mutts, a rising junior forward out of St. Augustine Prep in Richland, N.J.

Mutts’ versatility allowed him to slide into multiple roles this afternoon, whether it was stuffing the driving point guard on an isolation play, bringing down a crucial rebound or making good on a dunk in transition. All of this occurred just prior to rolling his ankle on the basketball with 40 seconds left in the game.

“I rolled it like four times in just this camp alone,” Mutts said. “It’s like a recurring injury. It’s been going on for a while now and I’m going to get it looked at when I go home.”

Ankle problems aside, Mutts has put himself in a position to make a drastic improvement between his sophomore and junior campaigns. In addition to playing at Hoop Group, Mutts and Team Final trekked down to South Carolina for the Nike EYBL Peach Jam, where they played against some of the best 16U teams from around the country.

For Mutts, the Peach Jam was a chance to play against different kinds of players while also a chance to show what he was capable of against stronger competition.

Confidence is not the only part of Mutts’ game that has come around. His ball handling, jumpshot and finishing ability have begun to show signs of improvement and that has caught the interest of Division I colleges.

While the 6-foot-6 is yet to yield any formal offers, he has spoken to coaches from Temple, La Salle, St. Joe’s and Fairleigh Dickinson. Mutts is still young, so the offers should come in time. In the interim however, the fact that he is drawing interest from Big 5 schools at this stage in the game is definitely something to monitor.

“They like my athleticism and my ability to slash to the basket,” Mutts said. “I don’t remember who I talked to from Temple but they said they were really interested and would be recruiting me pretty hard.” --Jack Goodwillie

Jarrod Simmons (2017/SF/Cushing Academy, Mass.)
Though he’s a 6-foot-6 wing, Simmons says one player he compares himself to is Montrezl Harrell.

It’s a bit of a strange comparison at first glance, considering Harrell, who was just selected by the Houston Rockets in the most recent NBA draft, is a 6-foot-9 power forward.

“He plays hard the whole entire game, he doesn’t take a single play off,” Simmons said. “That’s one of the biggest things that my (AAU) coach Vin Pastore makes us do, play hard 100 percent the entire game, and that’s something I take to heart.”

That’s about where the similarities end.

Simmons (pictured above), who plays with the Mass Rivals on the adidas Gauntlet, is a fluid, athletic perimeter player who loves to attack the rim off the bounce in transition. Harrell made his mark as an interior forward who’s relentless on the glass and challenging shots at the rim.

But Simmons has a chance to play at a very high level in college, much like Harrell, who starred at Louisville.

The most recent offer came from Temple, whose coaching staff extended a scholarship on June 29 after having Simmons at their prospect camp that week.

His main recruiter on the Owls staff is the newest coach on the team--former Temple guard Aaron McKie, who’s in his second year as an assistant for Fran Dunphy. McKie, who played for Temple in the 1990s, went on to a productive 13-year career in the NBA, including eight seasons in his hometown Philadelphia from 1997-2005.

“I heard he played for the 76ers and with Allen Iverson, so I love him, he texts me almost every single day, I talk to him a lot,” Simmons said. “He’s just been so far a good role model for me. I can talk to him, he’s done it already, he went to Temple, he knows the area, so he’s a great guy.”

Temple’s North Philadelphia campus is on a short list of schools that Simmons has actually seen, and he’s eager to take visits to Texas and a few others in the fall. He is, however, getting an idea for what he’s most looking for at the next level.

“The biggest thing with me is I want to feel at home,” he said. “If I have a good coaching staff that I feel comfortable with and teammates that I like, basketball will take care of itself.”

Jimbo Lull (2016/C/New Hampton, N.H.)
As a big man, it is one thing to dominate at the high school level where many of the kids lack the size to advance to playing collegiately. It is another for a player to have the confidence that he will be able to do the same in college.

While this transition is easier said than done, Jimbo Lull, the seven footer from New Hampton Prep has done everything in his power to make sure he as prepared as can be for whatever Division I basketball will have to throw at him. That includes moving across the country to play against kids at a level closer to what he will be seeing in college.

“Last year I transferred to New Hampton,” Lull said. “I’m originally from Los Angeles, in the Manhattan Beach area. I’m getting a lot of experience playing against bigger guys. It’s up-tempo and I think it’s going to help me a lot at the next level.”

Lull executed just about as well as one would expect someone his size to execute against fellow high school players. He cleaned the glass and operated with authority underneath the basket. Any player that tried to drive in on him found themselves in deep trouble.

Yet Lull believes he is capable of much more than what his height would indicate.

“I can’t really show it too well here, but I’ve got a pretty good touch around the basket,” Lull said. “I think the coaches really like how I’m able to run the floor.”

The well traveled big man has received offers from schools all across the nation, including George Mason, George Washington, Pepperdine, Loyola Marymount, UTEP and Tulane.

College coaches have a lot to like in Lull but he also admits that his conditioning has a long way to go before he makes the leap to college.

“My conditioning is the big thing I need to improve on,” Lull said. “That should help me run the floor better but other than that I think they like what they like.” --Jack Goodwillie

Quick Hits
--La Salle HS’s projected starting frontcourt, seniors Shane Stark and Ryan McTamney, both acquitted themselves well in game action on Thursday afternoon. Stark, a 6-6 combo forward, has really become a skilled face-up forward with a solid post game, which he showed by knocking down a corner 3-pointer and then finishing a tough reverse layup just a minute or two later.

Both have a laundry list of Division II and Division III schools on their tail. McTamney, a 6-5 wing, has more than 20 schools in a list on his phone, while Stark mentioned Pace, Arcadia, TCNJ and Scranton, and a few others, as schools that have been in touch. Both look like they would be right-away impact players at the Division III level with a chance to earn some D-II looks as their senior season progresses.

--After two years spent battling back from a torn ACL, Anthony Ochefu (2017/PF/Westtown School, Pa.) looks like he’s finally ready to contribute at the varsity level. It’s just not particularly clear what school he’ll be playing at--he’s been at Westtown the last two years, but the roster book listed him at Archbishop Wood; all he said on the subject was “I might be transferring.”

The younger brother of Villanova center Daniel Ochefu is a solid 6-foot-8 and 235 pounds, and he’s starting to hear from Division I schools; Binghamton started recruiting him after seeing him at a tournament last week, and he played well again in front of a number of coaches on Thursday.

--Though he was playing in the post due to being one of the taller players on his team, Michael Wiper (2016/Blair Academy, N.J.) did a few intriguing things that opened some eyes courtside. The 6-foot-5 wing hit a pull-up 3-pointer with a hand in his face from the top of the arc, had a tough driving layup a few minutes later and also displayed some nice athleticism on a blocked shot.

A native of South Carolina, Wiper graduated from Wade Hampton HS and is doing a prep year at Blair Academy (N.J.) this season after getting Division II and Division III interest as a high school senior.

“Right now, I feel like the caliber of player I am, D-II/D-III, but with some more work and exposure I’m hoping to go D-I,” he said. “But I would be fine going D-II or D-III. Wherever the best option for me is, I’ll go anywhere.”

--One year after transferring out of Germantown Friends (Pa.), 6-foot-4 wing guard Austin Harriott (2016/Hun School, N.J.) is entering his senior year primed and ready to play the best basketball of his young career. Even in what was a transitional season, Harriott helped the Hun School to a semi-final berth in the Mid-Atlantic Prep League. Today, he is hungry to improve on that result while also improving individually.

“The transition was pretty slow at first,” Harriott said. “But once I got the hang of it everything was good. It’s definitely a school that’s going to help me grow and that’s what I like.”

Harriott’s perimeter defense and court vision was on full display at Hoop Group. Even in defeat, Harriot still found a way to make his presence felt. He has received offers from Robert Morris, Central Connecticut State and NJIT.