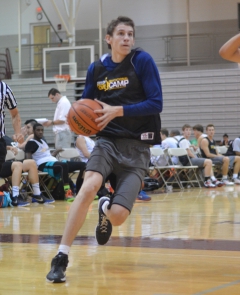 CoBL held its College Exposure invitational camp on Wednesday at Philadelphia University, hosting a few dozen college coaches and hundreds of spectators to see the nearly 80 players partake in drills and live scrimmages.

While all of the participants certainly played hard and many increased their stock to the college coaches in attendance, there were a few players that really impressed the CoBL camp.

Here are some of the wing/forward standouts from the camp; for the top guards, click here:

Justin Fleming (2016/SF/Father Judge)
Fleming can flat-out shoot the rock, but don’t be fooled into thinking he’s a one-dimensional player. The 6-foot-2 wing knows how to use his body in the paint and grabs his fair share of rebounds on both ends. Although he doesn’t do very much off-the-dribble playmaking in half-court situations, he’s a willing and able passer on the break, often finding his teammates for easy finishes. A consistent one-dribble pullup jumper would be a nice addition to Fleming’s already well-rounded game.

Brian Furlong (2016/PF/Audubon)
He didn’t have nearly the fanfare or reputation of some of the other forwards coming into the camp, but Furlong put together a few solid afternoon thanks to his hustle around the bucket. The 6-6 forward had plenty of second-chance points for his team, showcasing nice touch around the basket through contact; he also knocked down a few mid-range jumpers. And he certainly didn’t mind bodying up with several of the camp’s bigger forwards, holding his own inside even when giving up a few inches.

Jeremy Horn (2016/PF/Lower Merion)
Standing at 6-foot-9, the Lower Merion post player was the second tallest player at the camp, and played like it. Though he didn’t beat anyone with his speed, good positioning keyed his success causing him to seldom get beat down low. Defensively, he displayed good hustle, which is an important attribute for a player his size. Positioning was everything for Horn and if he can consistently put himself in spots that play to his strengths (his length and finesse in the low post) he should continue to thrive.

Christian Kelly (2016/SF/Phoenixville)
Kelly’s ability to finish the play earned him a spot on this list. At 6-foot-4, the Phoenixville forward’s size was overshadowed by bigger players throughout the day, but he more than made up for it by getting the job done nearly every time the ball was in his hands. While he excelled in transition, he also displayed good range, knocking down shots in all areas of the court. He's got great length at the wing position, and brings and endless motor to the court; he'll be getting calls from plenty of D-IIs and a few low D-Is.

Khalif Kroma (2016/PF/Constitution)
After barely making an impact on the varsity level for the Generals in his first two seasons there, Kroma looks like he’s a whole new man on the court. He’s shed 40 pounds from his 6-8 frame to get down to 260 lbs., and it’s made him a much more impactful player on the court. The lefty has a nice drop step and the ability to put the ball on the floor and utilize a left hook, though he still needs to work on finishing with his right. Kroma also was very vocal on the defensive end, calling out screens and switches and did a good job of stepping out on a screen and then dropping down to grab a rebound.

Juanir Moore (2016/PF/Concord Christian)
Cleaning up everything that fell off the rim was the 6-7 big man's job, and he did it with ease. Moore was able to provide more energy for his team after each emphatic jam. Moore excelled in the pick and roll game which led to open shots for his teammates as well. Moore showed off his smooth stroke from 15 feet while hitting a couple of jumpers in each game, but his bread-and-butter is right around the rim, absorbing contact and toughing out buckets. When Moore was on the court, coaches followed.

Lucas Olshevski (2017/F/Robbinsville)
Though he wasn’t the flashiest big man at the camp, the 6-5 combo forward from Jersey was solid all afternoon long. He didn’t mind banging down low with players that had a few inches and pounds on him, forcing plenty of difficult shots in the paint, and started the fast break with some good outlet passes. On the offensive end, while he got a few buckets around the rim, he showcased a smooth jumper with range out to the 3-point line. As he continues to become more assertive, he should become a tantalizing target for Division II schools next year who will love his inside-out game.

Bobby Planutis (2016/SF/Hazelton Area)
A somewhat-late arrival on the recruiting radar for colleges thanks to a four-inch growth spurt that took him from a 6-2 guard to a 6-6 wing, Planutis (pictured above) cemented his status as a clear Division II scholarship player and potential D-I recruit with a strong day in front of the coaches assembled. He’s a fluid wing with good athleticism and decent foot speed, and can really stroke it on the offensive end of the floor. He had quite a few fast-break dunks as well, and also didn’t mind taking some contact and getting to the line.

Rasool Samir (2016/PF/Martin Luther King)
After a disappointing junior year, Samir has been playing with a new intensity this summer, and that continued right onto the courts at Philly U. Perhaps the most active player all camp long, Samir was a force to be reckoned with around the glass on both ends of the court, forcing plenty of missed shots and pulling in everything he could get his hands on. As long as his motor continues to run at such a high level, there will only be positive results for him on the court.

Jon Williams (2016/PF/Dunmore)
Another intriguing prospect from the northeast corner of the state, Williams is an athletic 6-7 big man who can stretch the floor out to the 3-point line. He was one of the more active bodies on the defensive end as well, blocking several shots with good reach and timing. Though he’s still a little raw in a few areas, quite a few of the Division II coaches were very interested in what he could potentially be in a year or two; if he can continue to improve his jump shot and get his motor running at a top level, he could be scary good at that level.