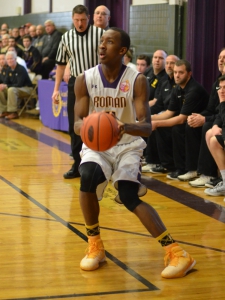 After adding a bevy of mid-major offers over the course of the recent April live periods, Roman Catholic wing Nazeer Bostick decided to go with a high-major school that had been pursuing him for years, as he announced his commitment to Penn State.

He made up his mind to go to school in Happy Valley a few weeks back, but waited until a special night to make his choice public.

“They’ve got a real good coaching staff that has faith in me and I see the program is on the rise,” he said; the Nittany Lions are coming off an 18-14 (4-14 Big Ten) season. “I decided tonight because it was the all-catholic banquet and i wanted to do it after the banquet was over, that’s why I chose tonight.”

Head coach Pat Chambers and the Nittany Lions first offered Bostick before his sophomore year back in 2013, after a breakout summer playing up on the 16U circuit with Philly Triple Threat. He had a quiet sophomore season and follow-up summer last year, his first with Team Final, but re-found his confidence and his game as a junior.

A 6-foot-4 wing, Bostick earned the nickname “Horse” for his relentless hustle and energy on the court. He played a huge role in helping the Cahillites win the 2015 Catholic League and PIAA Class AAAA championships, scoring 23 points and grabbing 13 rebounds in Roman’s win over Neumann-Goretti to break the Saints’ five-game winning streak in the Catholic League tournament.

Still a developing offensive player, he's made large strides in the last 12 months in more ways than one.

"I'm a way better person off the court and on the court, I've got a lot more to improve and everything's going right," he said. "I'm working, I think I'm an all-around better player than I was a couple of years ago."

One of four members of the current Team Final squad with a Penn State offer, Bostick admitted that being a trendsetter and convincing high school teammates Tony Carr, Lamar Stevens and Hershey's Dylan Painter to join him at State College next fall is one of his main goals.

With four graduating seniors and one open scholarship in addition, the Nittany Lions’ coaching staff has plenty of room for growth in a crucial class--and getting multiple members of the Nike-backed AAU program would be a coup for Chambers and staff.

“I’m trying to get them all to come to Penn State,” Bostick said. “I think they all like Penn State, and if we get a couple of them, we would take the Big Ten by storm.”

When he gets on campus next fall, Bostick will join former Roman Catholic standout Shep Garner in Happy Valley, as Garner earned the starting point guard spot this past season, his freshman campaign. Another Philadelphia native, Phelps School grad Mike Watkins, will start his PSU career in just a few months.