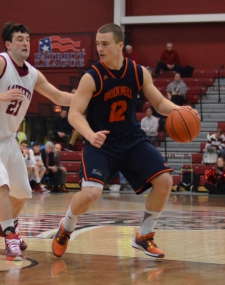 After making the decision to leave Bucknell on Monday, J.C. Show wanted to find his new home quickly. He needed just three days to make up his mind, choosing to continue his college career at Binghamton on Thursday afternoon.

"When you're transferring, you don't have a place," he said. "I had some things that I was looking for, and I pulled the trigger."

Show, a 6-foot-2 guard from Clarks Summit (Pa.), had a solid freshman season at Bucknell, averaging 6.9 ppg in 18.3 mpg off the bench. In high school he was one of the more dominant athletes in the state; the 2014 "Mr. Basketball" winner scored 1,950 career points at Abington Heights and was a three-year basketball captain and two-year football captain.

He was mostly a shooting guard for the Bison, but wanted a different role in his college career moving forward.

While Show admitted the coaching change played a small part in his decision to transfer, he added that it "wasn't the driving force, at all."

A nagging foot injury, however, did play a role in his decision. Plantar fascitis in his left foot eventually led to a stress fracture, and he hasn't been able to do any basketball activity since the season ended in a loss to Temple back on March 18.

It wasn't the first impression he wanted to leave on a new coach.

"I'm not sure when I'm going to be healthy again, and the timing of everything with the new coach coming into Bucknell and his first impression of me was going to be sitting on the sideline and watching practice and workouts," Show said, "and I didn't think that boded well for me.

"It had nothing to do with [Davis], it just had to do with any person who didn't really know me and my game and I didn't think that I was going to be in a great spot there with my injury now."

It's certainly a big score for Binghamton's fourth-year head coach Tommy Dempsey, who's got the Bearcats moving in the right direction for the first time in years.

Former head coach Kevin Broadus' tenure ended in disgrace in 2009 when several of his players were arrested and it turned out he'd been forcing the school to cut corners to admit several players. Marc Macon couldn't do anything in his three years at the help, and the program won just two games in 2011-12 before Dempsey was brought on the following season.

Last year, the Bearcats went 6-26, with a 5-11 record in America East play that was the school's best conference mark in five seasons. They'll return their four leading scorers, including rising sophomores Willie Rodriguez (11.8 ppg, 5.5 rpg) and Dusan Perovic (11.5 ppg, 3.3 rpg); of the nine most-used players in the rotation last year, all but one were underclassmen.

"Coach Dempsey has turned that program around as far as the types of kids that they're recruiting into Binghamton," Show said. "They inherited it and it wasn't in great shape, and now it hasn't translated into wins and losses yet but I feel like I can help them do that, help them get there."

When he's eligible in 2016-17 as a redshirt sophomore, Show could absolutely be joining a team that will be in the running to challenge for an America East title, and could slide right into a starting role at either guard position.

Even more importantly, that year gives him the ability to get healthy.

"I'm going to need some time to get back into working into playing again," he said. "Most guys look at the transfer year as a negative, and I'm looking at it as a positive, because I'm able to take my time and get back to 100 percent."

The move also allows him to play slightly closer to home; Bucknell was about two hours from his hometown of Clarks Summit, Pa., while Binghamton is only about an hour up I-81.