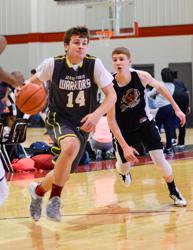 PITTSBURGH -- As the Pittsburgh Jam Fest wound down Sunday, a number of familiar faces weren’t finished trying to leave their mark.

Other than a fourth-round defeat against Wayne PAL (NJ) and a loss to the Arizona Warriors in the final game, it was another solid weekend for the 17U Jersey Shore Warriors, and especially Ryan Daly.

The Archbishop Carroll standout was his usual sharpshooting self Sunday morning, going 8 for 8 from the free-throw line and scoring 18 points in a 59-55 victory against a talented Minnesota Fury squad.

But while his offensive prowess is well-known, it was his defense that really stood out in the win. The 6-foot-4 guard took it upon himself to check Steffon Mitchell, a 6-8 do-it-all point guard/wing/forward with high-major interest for the Fury.

“He was kind of a combo, so he was hard to guard for big men because they were too slow, but I just tried to limit his touches as much as I could because he was killing us,” Daly said after the game. “I wanted to do that. Just play tough, try to out-tough him, I guess. Just go in for loose balls, get in his head, just doing stuff that I can to limit him, because he was on a roll. But then he kind of slowed down the momentum.”

While Daly never needed to step up as a defensive stopper this past season for Carroll, he said he relishes that role more in AAU ball and it’s another skill that can make him valuable as he tries to improve his athleticism and ball-handling.

Coaches from, Delaware, Lehigh, Fairfield, Loyola (Md.), Army and others were on hand to see Daly’s performance, in addition to Daly’s father Brian, a Penn State assistant. In the past couple of weeks, Brown and Hartford joined Penn in offering Daly, who said he has also picked up interest recently from St. Peter’s, Fairleigh Dickinson and Davidson.

On Brown, Daly said it’s a program “on the rise” and he liked what he saw when watching its games. As for Hartford, Daly has known head coach John Gallagher for a long time through his father.

“They run a nice offense to get people open, get shooters involved, and I like the system, so I’m definitely interested in both [Brown and Hartford],” he said.

Lastly, Daly said he doesn’t have a favorite for now but appreciates that Penn was his first offer and has shown the most interest.

“Their old staff left, and then their new staff has shown even more interest in me,” he said. “I’m definitely excited about looking into Penn because they’ve been making me feel wanted.”

Recruitment picks up for 2017 forward
As Episcopal Academy forward Nick Alikakos continues to bounce back from a bout with mono, his play has improved and coaches’ interest in him has gone up.

The 6-7 combo forward had 11 points to help Team Final’s 16U team beat Team Final Black’s 17U squad in a consolation game Sunday morning, and the way he did it was encouraging for a prospect who estimated that he’s about 90 percent of the way back to full health.

“I definitely want to show that I can get to the rack, shoot my mid-range and stuff, take people off the dribble and just finish,” said Alikakos, who ran the floor with energy and got most of his points by converting at the rim in transition and on the fast break.

Alikakos, who battled with the Team Final Black bigs a grade ahead of him, said he’s trying to become more of a true wing player, but doesn’t want to lose his ability to post up smaller defenders. The more versatile he can be, the better, and it seems to have led to an uptick in his appeal at the next level.

In the past two weeks, Alikakos said he has started hearing from Virginia Tech, Temple, and Penn State, and was especially excited to hear that Iowa has shown interest.

Honors piling up for Reddish
Even as a 15-year-old, Cameron Reddish is already a well-known name in Eastern Pennsylvania. Now, the 6-6 guard is going national.

Reddish was impressive all weekend at the Jam Fest in a number of ways, from his scoring ability to his maturity on the court even while playing with the Team Final 16s in the 17U division. But perhaps that’s to be expected given that the Penn State target (already) is one of 27 top young prospects who made the cut for the USA U-16 national team in Colorado.

“It’s a blessing. Just got to continue to work hard. It makes me want to work harder so I can continue to make teams like that and get better every day, so I’m just going to take it day by day,” Reddish said after Sunday’s win. “I’m really looking forward to it. A lot of competition, a lot of great players to play with, it’s going to be really fun.”

Reddish’s shot wasn’t falling against Team Final Black, which limited him to just six points, but he was able to make an impact on the boards, as a facilitator and with hustle plays. Taking into account potential, production, age and competition, he may very well have been the top prospect in Pittsburgh -- an idea that isn’t lost on him, but also doesn’t affect him much.

“I see [the hype] sometimes, but I don’t,” he said. “I don’t really worry about it. I just continue to play my game and work hard.”

Quick Shots
- In the 17U platinum bracket, the West Virginia Wildcats took home the title with a 65-55 win against Team Loaded 757 (VA).

- The Jersey Shore Warriors grabbed the championship in the 16U platinum division, adding that to their title two weeks ago in the Spring Jam Fest at Spooky Nook.

- Team Rio (NJ), a squad comprised solely of 2019 prospects including Scottie Lewis, Cole Anthony and Bryan Antoine, competed two years up in the 16U division and made it to the quarterfinals before losing to eventual runner-up Team Melo.