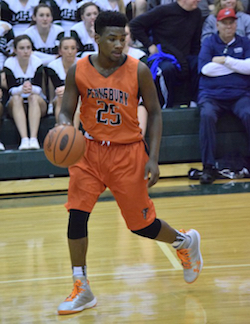 Update (7:55 PM, 4/22): Pennsbury senior guard Cameron Jones committed to Saint Peter's University on Wednesday evening, taking his only Division I offer and not letting it slip through his grasp.

"When I got the offer, I felt comfortable throughout the whole day," he said. "I just wanted to go home and talk about it with my dad and my mom."

The 6-2 combo guard with a sweet outside shot had a stellar senior year, helping his team into the PIAA Quarterfinals after an 18-4 regular season. The last 10 games he really stepped his game up, averaging 21 ppg, seven rebounds, seven assists and one turnover for the Falcons during that stretch.

He's the second member of Pennsbury's senior class headed to the Division I level; forward Derrick Woods will be playing at St. Bonaventure this fall.

"It feels great, it's a lot of pressure off my shoulders," he said. "People were constantly asking me what I was doing."

Pennsbury High School (Pa.) senior Cameron Jones, who's less than two months from graduating, had not taken a college visit since last summer, when he toured the campus of Bucknell University in Lewisburg, Pa.

However, that changed on Tuesday as Jones took an unofficial visit at Saint Peter's University, which promptly offered the 6-foot-1 guard during his tour of campus in Jersey City, N.J.

Jones, who had only received a few calls and texts from interested schools over the past few months, was relieved to finally step foot on a college campus and speak with coaches face-to-face.

"After not visiting a college since last summer, it was good to go up there. It was exciting," Jones said of visiting Saint Peter's. "I liked what I saw. It was a really good time. I liked the coaches and whatnot, and it was a fun experience."

Jones said the content of his conversations with head coach John Dunne and the rest of the Saint Peter's staff mainly revolved around academics, with some basketball talk and his opinions on the campus sprinkled in.

But it's clear that the two parties got along swimmingly, with the staff ultimately offering Jones by the end of the visit.

"I like how when I’m up there it’s a real family environment and the coaches are real cool guys," Jones said. "I feel really comfortable around them. I like the way they help the team come together."

Jones, who showed great proficiency from beyond the arc during his career at Pennsbury, feels that he would fit perfectly into the role that Saint Peter's has envisioned for him.

"They just want me basically to score the ball for them," Jones said. "They want me to play mostly at the two for them. They need a shooter, so I can come in there and step in there for them and just be a scorer, play good defense and play hard."

He can certainly handle the rock and run the point at times, but it's no secret that catching and shooting is his calling card. Knocking down jumpers will be essential for Jones, who isn't exceptionally tall or athletic, at the next level.

"My ability to shoot the ball and just my ability to play hard and make the right decisions on the court [will translate] because that’s the little stuff you need to do at the college level," Jones said. "You can’t worry about the stuff like being strong or other stuff you can work on yourself."

In addition to Bucknell, he was also receiving Division I interest from Rider, Delaware State and Fairleigh Dickinson last summer.

According to Jones, Fairleigh Dickinson is still interested, but Saint Peter's is the clear frontrunner for his services as the only current Division I school to offer him.

"I’ll probably make a decision pretty soon," Jones said. "I don’t really have a set time, but I probably won’t wait too long."