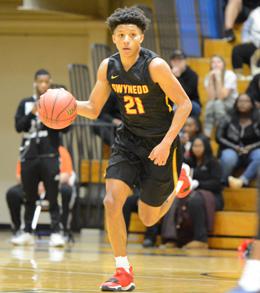 Rich Dunham (above, in 2018) and Gwynedd Mercy made a nice jump from their preseason rankings thanks to an undefeated start. (Photo: Josh Verlin/CoBL)

It’s time for our first in-season update to our D-III Power Poll!

In case you forgot, unlike our old D-III Power Rankings, this year’s rankings are voted on by a panel of 15 area Division III coaches and SIDs, then compiled by the CoBL staff. This week’s voting revealed a few tiers: a clear No. 1, six teams behind them who were included on just about everybody’s ballot –– and then a free-for all, with seven teams getting serious consideration for those last three spots, and a couple more picking up votes as well.

Look for the next update to this Power Poll midway through December.

10. Franklin & Marshall (Last Poll: 9; Power Points: 1.33)
Record: 2-1
Standout Star(s): Justin Kupa, Jr./G (18.0 ppg, 4.3 steals/game), Solomon Mathis, Soph./G (11.0 ppg)
Notes: The Diplomats have only played three games thus far, beating Lancaster Bible before losing to nationally-ranked Christopher Newport, then bouncing back to beat Albright on Friday night. They’ve held both of their opponents to 55 or below in their wins, limiting Albright to 1-of-10 from 3-point range and forcing 26 turnovers in the win. They’re losing the rebound battle by an average of 12 per game, however.

8. Susquehanna University (6; 2.00)
Record: 4-2
Standout Star(s): Lukas Yurasits, Soph./G (16.8 ppg, 4.8 rpg), Zachary Knecht, Sr./F (10.0 ppg, 6.3 rpg)
Notes: The River Hawks bounced back from their second defeat of the season, at Messiah on Wednesday, by downing Misericordia by 44 on Saturday, scoring 90+ for the third time this year. Eight players are averaging five or more points per contest, and 17 different players have scored a point for head coach Frank Marcinek’s squad. They’re also shooting a nifty 41.3% from 3-point range and holding opponents to 32.6%, with a turnover margin of +5.3/game and double the points off turnovers as their opponents (18.5 to 9.7/game).

6. Widener Pride (RV; 5.20)
Record: 5-0
Standout Star(s): Elijah Boyd, Sr./SF (13.2 ppg, 4.8 rpg), Pat Holden, Soph./G (12.2 ppg) Kenny Lewis, Soph./F (10.3 ppg, 7.7 rpg)
Notes: The Pride have to be pretty proud about the way they’ve come out, winning their five games by an average of 13.8 ppg, holding opponents to 37.5% from the floor while holding small-but-effective margins in rebounding and turnovers. Their trophies so far include Mount Aloysius, PSU-Harrisburg, Bryn Athyn, Kean, and Catholic; Misericordia and a trip to Farmingdale State in the way before MAC Commonwealth play begins on Dec. 4.

5. Ursinus College (5; 5.86)
Record: 4-1
Standout Star(s): Ryan Hughes, Soph./G (18.4 ppg, 8.2 rpg), Ryan McTamney, Sr./F (16.8 ppg, 7.4 rpg)
Notes: The Bears have come out on fire, making more than half of their shots through their first five games, hitting 44% from deep while holding opponents to 27.5%. Their only loss, to No. 24 Randolph-Macon at Messiah, came by four points; overall, they’re outscoring opponents by 10.4 ppg. Best win so far has been at Lycoming, but opportunities for more are coming up soon, with Haverford (at Haverford) and Swarthmore (at home) next.

4. DeSales University (3; 6.53)
Record: 3-1
Standout Star(s): Kweku Dawson-Amoah, Sr./F (15.3 ppg, 5.8 rpg); Tracy Simsick, Sr./SF (14.5 ppg), Timmy Edwards, Jr./F (13.3 ppg, 5.8 rpg)
Notes: The Bulldogs lost their season opener to Muhlenberg but have ripped off three straight wins since, beating Wesley and Alvernia up at SUNY-Oneonta before taking out Rosemont on the road on Saturday. DeSales has been great on the boards, with 10 players averaging multiple rebounds each game and the team holding a +9.7 advantage on the glass, but they’re also allowing opponents to hit 40% from 3-point range.