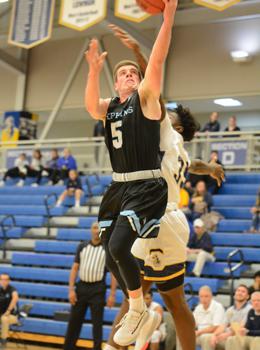 Conner Delaney goes up for a layup for Johns Hopkins. The EA grad is in his third season as a starter for Hopkins. (Photo: Josh Verlin/CoBL)

It’s safe to say that the Johns Hopkins men’s basketball team doesn’t Trust the Process. And they definitely don’t enjoy any “E-A-G-L-E-S” chants, or pretty much anything else about the Philadelphia sports scene, thanks to the two locals on the team.

“People find us annoying when we watch the Eagles game together,” sophomore Tom Quarry said.

“Everyone pretty much hates us whenever the Sixers are on,” junior guard Conner Delaney said. “We’re yelling and stuff like that. It’s fun to go back and forth between other guys, Boston fans, LA Lakers fans."

Quarry, a Father Judge graduate, and Delaney, an Episcopal product, embody the stereotypical Philly fans, and they do so proudly. Even if it’s turned the rest of their team against their rooting interests.

“Yes, many of them now hate the Eagles and the Sixers,” head coach Josh Loeffler, himself a Philadelphia suburbs native (West Grove) and Philadelphia sports fan, said with a laugh.

But you can be sure the Blue Jays don’t hate the Eagles and Sixers fans who happen to be their teammates.

Quarry and Delaney are two major reasons why the Blue Jays are off to an unbeaten start on the season, with their eyes on a potential Centennial Conference championship and trip back to the NCAA Tournament. Through the first four games of the season, Quarry and Delaney are the top two scorers for JHU (4-0), which opened its season with a 78-74 win against No. 9 Christopher Newport and then took its next three by an average of more than 20 points each.

But the two Philadelphia-area products, the only two Pennsylvania natives on a Blue Jays’ roster which features players from 11 different states, have taken quite different routes to get to where they are.

Delaney was an important piece of the Episcopal Academy rotation by his sophomore year and averaged double-figures in scoring as a junior. He burst out as a senior, averaging 18.8 ppg and earning Inter-Ac MVP after leading an underdog Churchmen squad to an 8-2 league record and share of the league title. The 6-foot-tall combo guard was at his best in his team’s biggest moments, and proved himself as one of the top competitors around.

Though he’d originally been committed to Villanova for lacrosse, Delaney had always had a passion for basketball, and decided to forgo life as a Division I lacrosse player for the land of high-academic Division III hoops.

While Delaney was making a name for himself in the Inter-Ac, Quarry was laying low in the Catholic League. The 6-6 wing only scored a total of 65 points as a junior at Judge, with a singular double-digit scoring performance. He certainly improved before his senior year, averaging 18.9 ppg to lead the Crusaders in scoring, albeit during a year in which they went 1-12 in league play.

Quarry’s length and shooting ability, combined with a stellar GPA and test scores, had high-academic D-III types swarming him during the summer going into that senior year, and Quarry picked Hopkins by November, quite early in the D-III recruiting cycle.

“He was my recruit when he came on his visit, that was the first time I got to meet him,” Delaney said. “Really shy to start off but having him come in and being a Philly guy, we just related to each other, really really well. He’s a funny kid, and it’s been great to have him on the team.”

Delaney and Quarry each had different first seasons at Hopkins as well. Delaney’s went splendidly: starting all 29 games on a team that won the 2017-18 Centennial Conference championship and an NCAA Tournament game, he won Centennial Rookie of the Year, averaging 10.7 ppg and 3.9 apg. 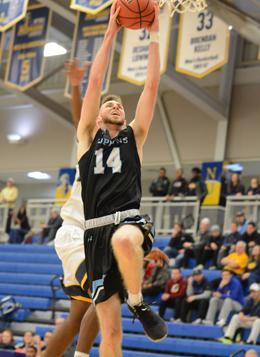 The next year, Quarry’s first at the school, he came off the bench in 25 games for an average of 11.2 minutes per appearance, averaging 3.8 ppg and 1.7 rpg and hitting only 27.1 percent of his 3-point attempts.

“We recruited Tommy with just an unbelievable belief in his talents, he’s a very good basketball player, and I think like a lot of freshmen he had a lot thrown at him, and he was never quite comfortable last year,” Loeffler said. “He showed flashes, but he was never able to stay consistent.”

Even though Quarry didn’t have the same on-court impact that Delaney was able to in his first year, he never worried about his playing time. After all, his freshman year at Judge he wasn’t even on the varsity squad; as a sophomore, he scored a grand total of eight points.

“I’ve been there, and I’ve never let that get me down or anything like that,” Quarry said. “I’ve always kind of maintained the long view, make sure I can help whenever I can and with whatever I can. I’m not really concerned with personal achievement or anything.”

While Quarry was getting his feet wet last year, Delaney was off to a great start, averaging 14.2 ppg through the first 10 games before an injury cut his sophomore season short.

This season, they’re playing indispensable roles for Loeffler’s third group of Blue Jays. Quarry (16.3 ppg, 5.5 rpg) and Delaney (14.3 ppg, 4.3 rpg) have been among the best players on the court in every game Hopkins has played thus far, and there’s no reason to think that’s going to change.

“I just think the thing about them is they care so much that it’s infectious and they work so hard that it’s hard not to love coaching them, because they just care so much about the team, and playing well, and winning,” Loeffler said. “It’s unbelievable how much they’ve put into it, they’re awesome.”

Last Wednesday’s win over Neumann, which moved Hopkins to 3-0, showcased the role each plays for the team. Quarry (10 points, seven rebounds) got things started with a first-half 3-pointer and then a pair of breakaway dunks, the second resulting in a 3-point play. Delaney (20 points, five assists) took over in the second half, hitting a step-back jumper from the left wing, a driving layup through contact, and a four-point play from the right wing to help the Blue Jays turn a five-point lead into a 15-point advantage which only grew from there.

It was vintage Delaney for anybody who’d watched him take over a game at Episcopal against the likes of Haverford School or Germantown Academy.

“I think it’s pretty similar, being on the ball a lot is definitely something I feel very comfortable with,” he said. “Running the team, making sure guys are getting to the right spots, keeping guys involved but still looking for my shot, and making sure that guys are all in the right position.”

While Delaney’s game is similar to his high school output, Quarry’s game is notably different. No longer described as “lanky,” Quarry’s added some noticeable muscle to his frame, and he’s moving better as well, with an increased athleticism shown by his dunks in the Neumann game. Throw in the fact that he’s hitting 50% of his 3-pointers so far this season (9-of-18), and he could be a super-versatile weapon for Hopkins the next three seasons.

“I think he just worked so hard on his game, on his body, he put on weight, he got stronger, he got more athletic, and I think having a year under his belt combined with his hard work has put him in this position,” Loeffler said. “He’s earned it, no one just said hey you can play all the minutes you want, he’s earned every second he’s played out there and he’s been great for us this year.”

Hopkins’ road to another Centennial championship will be tough, with national No. 1 Swarthmore (4-0), plus Muhlenberg (6-0), Gettysburg (4-0), Ursinus (4-1), Franklin & Marshall (2-1), Haverford (3-1) and McDaniel (3-1) all off to good starts. If they can navigate that minefield to the tune of another 23 or 24-win season, that could be enough to earn an at-large bid even without winning the league championship. Getting there will take a high level of play for another couple of months, which means consistent output from that Philly contingent.

And maybe if things go the way they want, the whole team will gather together to watch an Eagles game next fall. But don’t count on it.