The first head coaching meeting between Temple’s Aaron McKie and La Salle’s Ashley Howard went the way of the Owls, who clamped down defensively for the first thirty-some minutes and then hung on for a 70-65 win to stay undefeated on the young season. 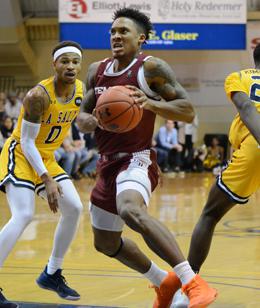 Nate Pierre-Louis (above) and Temple moved to 3-0 with a win over La Salle on Saturday. (Photo: Josh Verlin/CoBL)

(Mostly) business as usual for Owls

If Aaron McKie has a blueprint for how he’d look Temple’s wins to look this year, this was pretty darn close. For the majority of the game, at least.

There were the usual suspects on offense: junior guard Nate Pierre-Louis (21 points) and senior wing Quinton Rose (18 points). There was a stout defensive effort, with 12 steals amongst 17 forced turnovers, leading to 21 fast-break points. There was some bench contribution, with 18 points and 14 rebounds coming from the reserves.

And most importantly, at the end, there was a win.

“Three-and-oh,” McKie said afterwards. “I’ll take that, I’ll take it. I’m not pleased with the way we played today, but I told those guys I’ll take it, and  we’ve got plenty of room to grow.”

If McKie had been speaking with 8:39 left in the game, he might have had a slightly different tone afterwards. The Owls (3-0, 1-0 Big 5) had opened up a 21-point lead at that point, holding the Explorers under 30 percent from the floor, and it looked like the visitors were going to run away to an easy win at Tom Gola, about as easy as they come in the Big 5.

Then the Explorers (1-2, 0-2 Big 5) closed hard, hitting 11 of their final 20 shots, including 7-of-13 from 3-point range. Temple shot well enough from the foul line down the stretch to prevent a catastrophe, but a trio of 3-pointers in the final 40 seconds cut the deficit down to its final five.

“We just had a couple mental lapses as a team, all of us,” Rose said. “Gave up some open 3s when we should have just fanned out to the shooters. We’ll clean that up, we’ll be fine next time.”

“We got out of sorts,” McKie said. “We get happy and we forget about how we get these leads. I preach to these guys all the time about getting the ball from side-to-side, and once the ball starts to stick, we don’t play well when the ball starts to stick, and we didn’t move it side-to-side. And at that point it became a nip-and-tuck kind of game because they were trying to push it down and get shots up, made some 3s late on us and got the game close.”

For McKie, who starred in the Big 5 at Temple from 1991-94 and won Big 5 Player of the Year as a senior, it moved him to 1-0 in Big 5 play, with his next opportunity for a city series win coming Dec. 10 against Saint Joseph’s. But while there are few around who understand the importance of those games as much as the Gratz grad and former Philadelphia 76er, McKie said it wasn’t until Saturday morning that the importance of that day’s game really set in.

“It never even crossed my mind that this was my first Big 5 game,” he said. “We talked about La Salle all week, and then this morning I got a text from one of my friends, ‘hey good luck on your first Big 5 game,’ and I thought ‘wow, it is my first Big 5 game.’ It’s cool, just a kid, I grew up a stone’s throw away from here, spent a lot of time in this gym playing basketball.”

“Brandon, he had like a hamstring thing, so I just felt like it would be better to start him as opposed to sitting him and taking a chance for him to get stiff, and then putting him in the game and him not being able to give us anything,” Howard said. “So I figured let’s start him, see what he can give us early.”

Other than the lineup switch, Howard’s rotation went the same way it’s gone over the first two games of the season: 10 deep, with every one of those players getting ample chance to make an impact. Other than senior guard Isiah Deas, who played nine minutes, every Explorer had at least 14 minutes of time, with nobody hitting the 30-minute mark.

Junior guard David Beatty and freshman guard Sherif Kenney led the way with 13 points apiece, pacing an Explorers squad that shot only 23-of-63 (36.5%) overall but was 15-of-37 (40.5%) from 3-point range. All 10 Explorers scored; though Saul Phiri (11 points) was the only other one in double figures.

“For us to get this kind of experience early, it’s going to work wonders for us, especially for my freshmen, because those guys are getting a lot of minutes,” Howard said. “My freshmen played two Big 5 games this week against two NCAA Tournament-caliber teams. So they’re going to get better, they’re going to learn from it, and it’s really encouraging to see that they have the fight in them to not quit and just not lay down.”

“I’m proud that our guys fought until the end,” he added later, “but eventually I hope we get this program to the point where we’re just not settling for moral victories.”

Moore out, Parks steps up

Temple was lacking senior big man Damion Moore against La Salle, but the Owls had no problem getting production from their backup big man. With Moore’s back preventing him from taking the court, where he’d averaged four points and five boards in 12 minutes over the first two games, redshirt freshman Arashma Parks stepped into his role and filled it nicely.

Parks, who’d yet to score in his first two collegiate appearances, 10 minutes of court time spread over the Owls’ opening two games, saw a dozen minutes of playing time against La Salle, and didn’t put it to waste. The 6-foot-9, 230-pound power forward out of Ohio finished with seven points, five rebounds and a block in 12 minutes, going 3-of-5 from the floor and hitting one of his two foul shots.

“He played well enough for us to win, to help us win,” McKie said. “He was a spark, actually. He got a couple key offensive rebounds for us, and some put-backs.”

Parks is the younger brother of former Villanova and current NBA big man Omari Spellman. He spent his final year of prep school at the Phelps School in Malvern, playing for former Temple guard Brian Shanahan, then sat out last season due to a combination of depth and injury.

On an Owls squad that’s been aching for some production from its big men, there’s some availability for Parks to earn a regular role if he can continually crash the glass and guard opposing bigs.

“He’s young, we’re just throwing him out on the deep end of the water right now, just got him out there, trying to figure some things out,” McKie said. “I loved his activity and I loved his energy. He brings something to the table, he adds value to what it is that we’re doing.”

Starting forward Justyn Hamilton hasn’t found a way to make much of an impact just yet. The 6-11 junior forward hasn’t played more than 14 minutes in any outing, and is averaging only 3.3 ppg and 2.7 rpg through three games. The Owls’ most productive rebounding lineups have tended to come with their two 6-7 junior wing forwards, Moorman and De’Vondre Perry in the lineup, but they need to start getting some use out of their size and length at the ‘5’ position.

Great Scott? Not quite yet

In his two years at Kennesaw State, James “Monty” Scott was one of the best scorers in the Atlantic Sun conference. The St. Benedict’s Prep (N.J.) product scored nearly 700 points as a freshman and sophomore, averaging 17.3 ppg in 2017-18 before transferring to Temple and sitting out last season due to NCAA violations.

But while Scott was expected to add some scoring pop off the bench for the Owls, so far, they’re still waiting for anything close to a breakout performance. Scott saw 17 minutes for Temple on Saturday, but finished with as many points as turnovers (three). Through three games, the 6-3 guard is averaging only 3.0 ppg, and is just 4-of-14 from the floor and 1-of-5 from 3-point range.

Scott’s scoring isn’t his only asset; through three games, he’s proven to be a capable defender and a willing rebounder, and his on-court effort is strong. But on a team that’s looking for some consistency beyond the expanded 3-point arc, a guard who shot 35% from deep at Kennesaw State could provide a little help in that area.

“This is our third game, we’ve got a long way to go,” McKie said. “I’ve just got to continue to work and find different ways to get him involved, and get our guys to understand that he’s certainly an offensive weapon that we could use and they’ve got to look for him more out on the floor.”

-- La Salle (1-2) travels down to the Gulf Coast Showcase in Estero, Fla., where Murray State (2-1) awaits in the opener. Weber State or Wright State await in the semifinals/consolation.