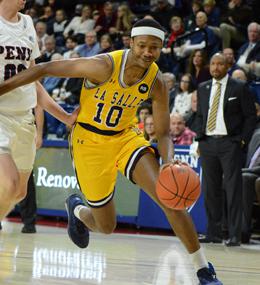 Isiah Deas (above) is adjusting to a different role within La Salle's deep rotation this season. (Photo: Josh Verlin/CoBL)

Isias Deas’ role has been constantly changing the entire time he’s been at La Salle. In his final year of competition, it’s possible he’s found one that fits –– and though it might not be the role every senior envisions themselves playing, it’s one that Deas seems happy to play.

It’s been a strange road for Deas, taking him down an uneven path that’s ultimately led to a more mature outlook and perhaps his most significant position yet with the Explorers.

Joining the La Salle roster after a prep year at Coastal Academy (N.J.), Deas arrived in North Philadelphia an unheralded 6-foot-6, 200-pound wing, a freshman guard in a backcourt that already featured seven different guards and wings who were in their third, fourth, or fifth year of collegiate hoops. Playing time figured to be sparse on a roster that was loaded with talented transfers from high-major programs, on a program that was at the time just four years removed from a Sweet 16 run.

Then, Deas’ first game in college, he started, played 29 minutes, and scored 12 points including 3-of-5 3-point shooting, an eye-opening performance in an overtime loss for the Explorers. But as quickly as the spotlight came, it went; Deas only started one more game as a freshman and had stretches of inaction, averaging 3.2 ppg in 17 appearances.

His role expanded as a sophomore, with 10 starts in 28 games played, averaging 9.5 points and 4.4 rebounds in 24.4 minutes, though he shot just 36.3 percent overall and 29.1 percent from 3-point range.
Then, the entire Explorers basketball program changed.

Reading between the lines, it’s clear that Deas and Ashley Howard didn’t always see eye-to-eye, when Howard took over as head coach of the Explorers’ men’s program in 2018 after 14 seasons of John Giannini’s tenure. But while several players left the program both when Howard arrived and after his first season –– a normal occurrence for new coaches, as they figure out who will be in their rotation moving forward and who won’t –– Deas stayed.

“I came in and had different expectations for all of our guys than they were used to,” said Howard, who came to La Salle after spending five years as an assistant under Jay Wright at Villanova. “And there was some growing pains for the players and for me as a coach, just trying to learn them. And we had some guys leave the program, and when Isiah made the decision that he was going to return, that showed a lot to me because I knew that he understood where I was trying to take the program and he wanted to be a part of it, and that meant a lot.”

Deas enjoyed his best scoring season as a junior, averaging 11.9 ppg, though his rebounds dropped to 2.6/game. He finally became a reliable 3-point shooter, hitting 34.8 percent (64-of-184), second-best on the team among players with 40-or-more attempts. And though he came off the bench in seven of the first 10 games of the season –– all 10 losses –– he started all but two over the remainder of the year, a stretch during which the Explorers went 10-11.

But this offseason, Deas found out that his senior year might not go the way he’d envisioned. With five new players on the team, including four freshmen and Clemson transfer Scott Spencer, Howard suddenly had some real depth to work with.

Despite the fact that Deas was the team’s leading returning scorer, Howard had a plan: to use him off the bench, as an experienced scorer with a second unit that often gets subbed in all at once, like a hockey change four minutes into a college basketball game.

“Once we got our young guys on campus and we just started to mold our team, I just felt like our depth was our biggest asset,” the second-year head coach said, “and if we could have an experienced guy that’s coming in the game with younger guys as opposed to making a substitution patterns where I’m putting all young guys in the game together, that would help our team.”

“It’s human nature that you want to start your senior year and be the frontrunner,” Deas said. “But like I said, it’s all about team success at this point. So if this is what’s best, then I’m all for it.

“I don’t really consider it an adjustment, because early on in my La salle career I came off the bench the same exact way,” he added. “The majority of my starts sophomore and junior year came from injuries, so the only difference is being ready and being aggressive as soon as I get on the floor, whether that’s making a defensive play or getting to the rim, staying ready.”

It was a flip-flop to Wednesday night at the Palestra, where Deas stepped into the spotlight. He finished with 17 points on 7-of-13 shooting in 24 minutes though the Quakers prevailed. Once again all 10 Explorers played at least nine minutes; other than Stone, who didn’t play in the second half, the other nine were out there for at least 16 minutes each.

The three players who combined for 39 points in the first game had just 10 in the second game; Deas and freshman guard Ayinde Hikim combined for 31 after they only had two apie

“He’s been great, he’s embraced his role,” Howard said. “Even after the Iona game, [when he] didn’t play a lot, his attitude was unbelievable: he encouraged his teammates, he cheered for them, his body language was awesome, and then he came to work the next couple days in practice. And I told him, I said ‘yo man, this is how we need you to handle it,’ and I think because he’d had the right attitude during the Iona game, during this week, I thought that’s what gave him the opportunity to come in and have a decent game today vs. Penn.”

Watching the Explorers in action, with their 10-man rotation including all four of those freshmen, with scoring loads changing from night to night, Deas gets his place, and he gets his coach: “our relationship is a lot better now,” he said. And while he might only have certain games where he scores double-figures, or plays 20-plus minutes, and others where he spends most of it cheering from the bench, he’s been around long enough to know he’ll take what he can get.

“What’s best for the team, it might be me coming off the bench, it might be me starting,” Deas said, “but I think the biggest thing for me is always trying to be a leader to the young guys, lead them in the right direction, whether that’s being vocal or just showing them every single day how to put their hard hat on and going to work.”