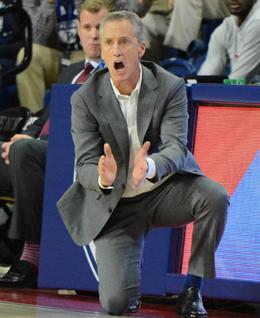 Penn coach Steve Donahue (above) has guided the Quakers to wins in their last six Big 5 contests. (Photo: Josh Verlin/CoBL)

The Big 5's 2019-20 season opened up Wednesday night as Penn took down La Salle 75-59 at the Palestra. Click here to access a full photo gallery from the evening.

Here’s a notebook of the evening’s highlights, stats, and quotes:

Quakers win in textbook Donahue fashion
Much of Penn’s typical winning formula under Steve Donahue was missing in Saturday’s blowout loss to Rice. The Quakers gave up 80 points, lost the rebounding battle by 12, and senior wing Ryan Betley scored just two points. But Penn’s trademark traits — sturdy defense, rebounding, and inside-out scoring — were all back against La Salle.

The Quakers held La Salle to just 3-for-14 shooting beyond the arc, five assists on 24 made field goals, and 16 turnovers. On the glass, Penn outrebounded the Explorers 47-30 and held a lineup featuring Ed Croswell, holder of the nation’s highest offensive rebounding rate last season, to just three offensive rebounds all game. Penn was all over the offensive glass, too, and created 16 second chances which turned into 16 points — the final margin of victory.

“[The first two games,] we didn’t play as well as we could defensively, things we really build our defense around, catch-and-shoot threes and assisted baskets and fouls that we committed,” head coach Steve Donahue said. “I thought tonight we did all that for 40 minutes. We guarded, we didn’t foul, we made them finish over us, and they just didn’t get any really open looks from 3.”

Without open looks and second chances, the Explorers had no hope of keeping up when Penn started making shots, which finally occurred at the outset of the second half.

Betley, who missed all but five minutes of last season with a patellar tendon tear, knocked down back-to-back 3-pointers to break the game open for Penn, headlining his 18-point, eight-rebound performance.

Senior forward A.J. Brodeur collected his 21st career double-double on the day, racking up 20 points, 13 total rebounds, seven offensive rebounds, and four assists. And senior point guard Devon Goodman led everyone with 21 points to round out a senior trio which scored as many points (59) as La Salle on the night.

When the Quakers can lock opponents down and get shots to fall, they’re quite hard to beat. It’s a brand of basketball that brought Penn an Ivy League championship two seasons ago and secured a sweep of the Big 5 last season. And if the Quakers are to have another successful season, it will come from sticking to and executing that game plan again and again. -- Zach Drapkin 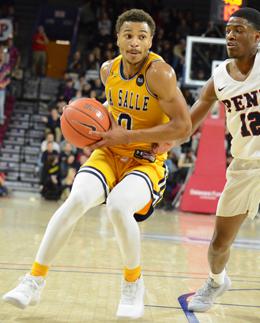 The Explorers’ box score from their season-opening win over Iona last Saturday was quite different from the one that they produced against the Quakers on Wednesday.

Against the Gaels, it was junior guard David Beatty (15 points) and sophomore forward Ed Croswell (12 points) as starters in double figures, with freshman Brandon Stone popping in 12 off the bench. But at the Palestra, it was senior Isiah Deas chipping in 17 points while freshman Ayinde Hikim had 14 –– after they both had only two points apiece in the opener. Croswell had eight, but Beatty and Stone combined for two points.

That’s likely going to be a theme for the Explorers this year: there’s talent on the roster, but will anybody produce on a consistent level? At some point, the Explorers would like to find a guy-to guy in the clutch, but for now, their unpredictability can make the more difficult to guard.

“What they have is a bunch of guys (that) if you don’t guard them from 3, they can make it, and they’re very good off the bounce,” Donahue said. “The part that’s going to have to come, is […] they have to get a feel for each other, where they’re going. Right now it’s one guy gets it and they score, and they’re all dangerous, but once they start getting used to playing with each other, I think you’re going to see a good offensive team.”

Though the production might vary, what’s likely to stay consistent all year long is La Salle’s rotation. Second-year head coach Ashley Howard has been going 10-deep and giving double-digit minutes up and down the roster, rolling with all sorts of rotations and lineups to see what sticks. Through the first two games, eight different players have scored at least 10 points; the two who haven’t, freshmen Sherif Kenney and Christian Ray, have both played more than 34 total minutes and will more likely than not have their featured moments in the scoring column at some point this season.

Each game, and each game prep, is a manner of finding mismatches and the hot hand(s) and rolling from there.

“I want to get stops, and I want to get out in transition,” Howard said. “Because when you get stops, you get out in transition, and everybody’s touching the ball, everybody’s getting easy baskets, we’re getting fouls, getting to the foul line, that’s what’s best for our team. If we’re not getting stops and converting off of our stops, then now we’ve got to figure out in a half-court, who’s scoring the ball, what plays are we running for who, and any given night it could be somebody different.

“I think it’s really going to be predicated on what the matchup is, the best matchups for us each game vs. each individual opponent.” -- Josh Verlin 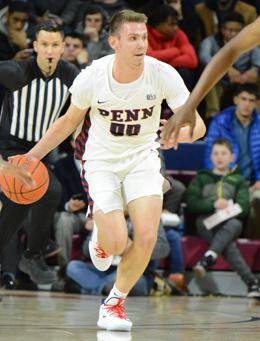 Ryan Betley (above) is one of the few Penn players shooting well from beyond the arc early this season. (Photo: Josh Verlin/CoBL)

It’s only been three games, but a Penn squad that prides itself on 3-point shooting has yet to find its rhythm from beyond the arc. The Quakers went 7-of-28 (25 percent) from deep in their win over the Explorers on Wednesday night, after hitting a combined 11-of-48 (22.9 percent) in their first two games of the season.

That means through three contests, Penn is just 18-of-76 (23.7 percent) from 3-point range. It’s still a small sample size, but a worrying one.

“Maybe the first few games they (haven’t been) falling,” Betley said, “but it’s just a matter of staying aggressive, trusting your shot, trusting who you are, and they’re going to fall.”

Freshman guard Jonah Charles was expected to be a shooting threat, but he might not see the court this year (more on that below); his classmate, Max Martz, is a strong outside shooter, but has missed the only two 3-pointers he's taken in 22 minutes on the court.

Blame the NCAA’s moving the 3-point arc back more than a foot this offseason if you want, but the Quakers aren’t buying it. At least not to drop them 10 percent as a team.

“I do think we’re a good 3-point shooting team,” Donahue said. “I think we’re getting good looks as you saw tonight, but when we start missing we’re just trying a little too hard sometimes and squeezing them a little bit.”

Last season, Penn snapped Villanova’s 25-game Big 5 winning streak with a 78-75 upset at the Palestra. Now, the Quakers are putting together a little undefeated run of their own. That win over Villanova propelled Penn to sweep the 2018-19 city series, and adding on a win over St. Joseph’s from January of the 2017-18 season along with Wednesday night’s victory, that’s six straight Big 5 wins for the Quakers.

Don’t look now, but Penn is a Big 5 powerhouse fresh off a decade-long hibernation.

“When we first got here, there was a long drought of not competing with the teams in the Big 5,” Donahue said. “The Big 5 is essentially what we sell to kids because we’re trying to get kids that want to play in this environment, play against these type of teams, and you can only say so much if you don’t win. You’ve got to start beating your opponents and your rivals.”

Prior to last season, Penn had not won the Big 5 title since 2001-02. That history is all out the window now, however, and Penn has a target on its back among the city teams.

“You know that every game is going to be competitive,” Goodman said. “We know that since we’re the defending Big 5 champs, everyone is going to give us their best this year.”

The Quakers survived the start of the new campaign, but the question is now how far they can go with this streak. Penn’s next test is as tough as they come, a trip to Villanova on December 4. The Wildcats will be hungry for revenge after last year’s result and Jay Wright’s crew will have its eyes on regaining its crown atop the City of Brotherly Love.

Whatever happens in that game, this streak, as far as it has already come, is very significant for the Quakers.

“For us to go out there and win six straight,” Donahue said, “it is a big deal. It matters.” -- Zach Drapkin

The Quakers suffered a number of injuries this offseason and are currently missing multiple players, including Jonah Charles, a freshman guard who stood out in team scrimmages, and Michael Wang, who provided key scoring when he was healthy last season.

Steve Donahue said Charles fractured his fifth metatarsal and underwent an operation to repair it; he’ll be out for at least a few months.

Penn was expecting more depth heading into the season, but now the hope is on having these players back and ready for a tough conference slate starting in January.  -- Zach Drapkin