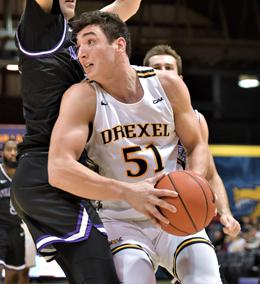 James Butler (above) has become Drexel's force in the middle. (Photo: Mark Jordan/CoBL)

In his own family, James Butler goes down as an okay rebounder. Average, at best. Certainly nothing special. That’s the curse of being a great rebounder in arguably the best rebounding family in the country, if not the whole world.

James’ sister, Natalie Butler, set the NCAA record for rebounds in a season during her senior year at George Mason in 2017-18, pulling in 563 rebounds, or a massive 16.6 missed shots per game. She also tied the NCAA record for double-doubles (33), and led the Atlantic 10 in scoring (19.2 ppg). A 6-5 forward, she only played one season at George Mason, after starting her college years at Georgetown and then playing as part of the storied UConn rotation under Geno Auriemma for a couple years.

Their father, Vernon Butler, played at Navy from 1982-86, where he and David Robinson led the Midshipmen into the 1986 Elite 8. Vernon’s still the second-leading scorer (1,952 points) and rebounder (1,115) in school history, trailing only The Admiral in both categories.

So, James Butler’s averaging 10.3 points and 8.2 rebounds as a redshirt sophomore at Drexel last year, leading his team on the glass? Meh. But the black sheep of the Butler clan insists that his family doesn’t rub it in his face.

“It’s never that –– we’re pushing each other to be better,” he said. “We grew up working out together, our family’s always revolved around basketball, so we go to the gym together a couple times a week...I push (Natalie), she pushes me and it’s really a part of why we play so well.”

All kidding aside, Butler is certainly continuing the family torch, and he’s holding it even higher now in his second year playing with the Dragons’ program, and third overall. The 6-foot-8, 230-pounder has become a force to be reckoned with in his year and a couple games as a Dragon, after seeing the court for only 25 minutes total during his only season at Navy in 2016-17.

In Drexel’s 72-64 win over Niagara on Friday night, Butler collected 15 boards for the second straight game to open the season, adding in a career-high 22 points to help his team collect its first victory of 2019-20. He's been a consistent performer for the Dragons since the beginning of last season, and is a major reason why Drexel's future looks as bright as its been in quite some time.

A muscular specimen of a power forward, Butler is an old-school glass attacker, out-jumping opponents and teammates alike for anything he can get his hands on, no matter the opportunity.

“It really started, I’d say, in middle school; I had one practice, my coach mentioned to me [that] I had like 10 offensive rebounds in one practice, and I said ‘I’m pretty good at this, so let’s try to make this a focal point in my game,’” Butler said. “Whatever you can do to get to the next level and play college, (and) I think being a good rebounder was a huge part of that.”

Butler’s rebounding was a major factor in Drexel’s 35-26 advantage on the glass, and played a huge role in the Dragons’ game-changing, 20-5 run that turned a 48-44 deficit into a 64-53 lead with four minutes left. He had three offensive boards during that run alone, two of which came off his teammates’ missed foul shots, and all of which ended in Butler layups.

“We always talked about getting in the flow of the game early, and one way to get in the flow and contribute is to be able to rebound, and you’ve got to be tenacious about it,” Victor Butler told CoBL during his drive home to the family’s Virginia home after watching the Niagara win in person. “The game has changed quite a bit, and it’s more perimeter-oriented, and if you want to be a factor and contribute, one way to get involved in the game is rebonding –– and in particular offensive rebounding –– and it gives you an opportunity to score more as well.

“We practice it a lot, too, about the skill when the shot goes up, locate, box-out, and when the shot comes off, release and go get the ball too, and at the end of the day we always sort of have a motto, it’s like how bad do you want it? You can’t be denied if you want it bad enough.”

In his first two games this season, James Butler has gone 13-of-21 (.619) from the floor for 29 points (14.5/game) and 30 rebounds (15.0/game), leading his team in both categories. He’s collected five assists and only turned it over twice in 64 minutes on the court, tied for the most time played on the team. Most impressive, perhaps, is the fact that he’s yet to commit a foul, despite playing a clearly physical post game.

“His approach every day is why he has a day like today,” fourth-year Drexel boss Zach Spiker said after the Niagara game. “Today was not an out-of-body experience, it was just taking advantage of the opportunity given to score down there, to make some plays happen.”

That Butler went 10-for-12 on field-goal attempts in the Niagara win was not an anomaly.

Butler knows his shooting range. It’s not far; occasionally, the Drexel junior will pop out to 15 feet for a mid-range jump-shot attempt. But for the most part, Butler does his work within a few feet of the rim, and he’s capable of making his way there by putting the ball on the floor. There’s a reason the 6-foot-8, 230-pound led the NCAA in field-goal percentage last season, hitting an efficient 59.8 percent of his shots, allowing him to average double-figures despite taking fewer than seven shots each game.

But it’s more than just about getting easy looks. Butler is an expert rim-plunger, able to gather bullet passes from sophomore point guard Camren Wynter (seven points, nine assists) with ease and instinctively know where he is around the bucket, where he can finish flawlessly with both hands.

Watching Butler operate, it’s hard to believe he was only able to see the court for two dozen minutes as a freshman at Navy, coming off a prep career at Lake Braddock (Va.) where he averaged 27.5 ppg and garnered all sorts of postseason accolades as a senior. Realizing that his parents’ alma mater wasn’t the spot for him, Butler quietly entered the transfer market.

It wasn’t long before he connected with Spiker, who’d initially recruited him since his sophomore year in high school, when the Drexel boss was still the head coach at Army. Now he's an integral part of a Dragons program that's looks much-improved from the one that went 13-19 (7-11 CAA) a year ago.

The first time around, Butler's school choice wasn’t quite right; the second time, it was the perfect match.

“At West Point, it’s hard because both of my parents went to the Naval Academy, the rivalry. If he was at a different program, I probably would have ended up there, but it worked out well -- he went to a different program and I ended up here,” Butler said. “I can’t complain, it was a very interesting path for me, definitely some rocky times, but I’m very happy where I’m at.

“I think we’re at the verge of doing something special.” 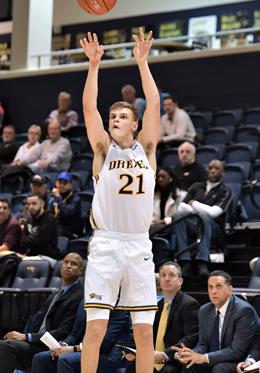 -- Freshman wing forward T.J. Bickerstaff has really established himself as a name to watch for the Dragons through the first two games. After a 16-point, seven-rebound outing against Temple, the Sandy Greek (Ga.) alum had 10 points and five rebounds in 17 minutes, leading the team in fouls drawn with seven. He’s got to work on his shooting (4-9 FT) and get stronger/more efficient with his movements, but the upside is certainly there. He also led Drexel in plus/minus, as the Dragons were +21 with him on the floor. His classmate Mate Okros also showed what he can do after a quiet opener, finishing with 11 points thanks to 3-of-5 shooting from deep; two of the 6-6 wing’s triples were huge parts of the game-changing 16-2 run against Niagara.

“(Bickerstaff) has no problem being aggressive, that’s not the issue by any stretch. And that’s a good thing, but I think Mate also, both of those guys are on the balls of their feet, ready to make plays, and we need them,” Spiker said.

-- Zach Walton only played in seven games last season before an injury ended his season, and the 6-6 wing out of Edmonds (Wash.) Community College was just starting to get rolling, averaging 9.6 ppg and 4.6 rpg before his season was cut short. He’s back this year, and while he provides a nice scoring punch off the bench, he’s got to cut down on the turnovers.

Walton turned it over four times, including two offensive fouls and a travel. That was part of 19 turnovers from the Dragons, following a 17-turnover performance against Temple. Walton was otherwise solid, scoring seven points and dishing out three assists in his 21 minutes.

“[Walton’s] getting back into a rhythm now and I think he’s important for our long-term success and you saw his ability to score in different ways: he hit a 3, had a nice finish, he’s active, and will continue to get better,” Spiker said. “But as a team we had 19 turnovers...17 was kind of eye-popping, and to go to 19, we’re going the wrong way.”

-- Drexel gets back in action on Sunday, Nov. 10 with a 2 PM game against Abilene Christian. The Wildcats (1-0), who will be playing their first Division I opponent this season, went 27-7 and captured the Southland Conference Tournament championship a season ago, though they have to replace three of their top four leading scorers. Abilene Christian does have one local product on the team, junior wing Makhi Morris (Del-Val Charter).