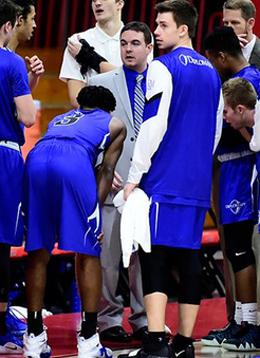 With the regular-season opener mere hours away and last-second changes still being etched into the game plan, Nick Nichay’s days likely were much longer than his nights as the countdown toward Franklin & Marshall’s scrap with York ticked slowly.

Nichay also probably busied himself checking on bumps and bruises, scouring through scouting reports for something that might have been missed, counseled a player or two with an individual shooting workout and even made a few recruiting calls.

Such is the life of a college basketball coach — regardless of the level your school competes at and regardless of your role within a particular program — except Nichay’s job title changed suddenly earlier this week when a shocking bulletin came down.

Franklin & Marshall men’s basketball coach Glenn Robinson announced his retirement from coaching effective today (Nov. 5). Robinson, who has been the head coach of the Diplomats for 48 seasons and is the Division III all-time wins leader, will take on other administrative duties within the athletic department and assist with basketball operations through the remainder of the academic year.

That paragraph sat atop a lengthy release detailing what would come next and espousing Robinson’s countless exploits, stunning news the highly regarded Lancaster-based school splashed on its athletics website and social media accounts.

Nichay, the thirtysomething product of a North Jersey upbringing who was about to begin his eighth season in the F&M program, was told two days before the news broke. The Diplomats players learned of Robinson’s decision a day later at practice.

Nichay also saw his role within the Centennial Conference program go from trusted assistant to Interim Head Coach — he’d served earlier stints in that role each of the past two seasons when Robinson couldn’t go — just 72 hours before opening tip.

“It’s one of those things that a lot of different emotions go through you,” said Nichay, who arrived in Lancaster prior to the 2012-13 campaign following shorter stints as an assistant at D-III Hartwick and D-II LeMoyne. “Probably the best way I’ve described it to countless people reaching out with congratulations and ‘How’s it going?’ kinds of things is it’s definitely a bittersweet time.

“Obviously, it’s exciting. I think everybody that gets into this wants an opportunity to become a head coach, especially at a place that means a lot to you and it’s a place I’ve been seven-plus years going on eight,” Nichay continued.

“The obvious flip side of that is I’ve had eight years of being mentored and have developed a relationship and a connection with Coach over all these years and it’s been pretty much every day. He’s still around at the school right now. Even today, we were talking, just discussing practice plan and certain things.

And in that aforementioned release, Robinson gave his protégé a strong endorsement.

“I am retiring because I believe it is the right time,” Robinson said. “This decision has absolutely nothing to do with health. It has to do with the demands of coaching. Coaching demands energy, alertness, attention to detail and unlimited enthusiasm, and I feel Coach Nichay is better able to demonstrate those attributes with our team.”

“Part of what made this decision easier is that I know the program is in excellent hands with Coach Nichay,” Robinson added. “He has been with our program for seven seasons and has done a tremendous job leading our recruiting efforts and has taken on more of the day-to-day running of the program in the last few seasons.”

(High Expectations: See where F&M was ranked in our Preseason D-III Power Poll)

Robinson leaves his long-term post as the winningest coach in NCAA Division III history with 967 victories — overall, only Duke’s Mike Krzyzewski (1,133) and Jefferson’s Herb Magee (1,096) entered the season with more successes than Robinson — but he also led the Dips to 25 NCAA Tournaments, won 44 games at the NCAA level, reached the Sweet Sixteen 17 times and the Elite Eight on 10 occasions.

During Robinson’s lengthy tenure, he also piloted F&M to five Final Fours and one championship game appearance. Twenty-six of Robinson’s players were tagged All-American, 93 landed all-conference honors (17 were named conference player of the year) and 35 players reached the 1,000-point plateau before their careers ended.

A southeastern Pennsylvania native who grew up in Yeadon, Robinson played basketball and baseball at West Chester before joining the F&M coaching staff in 1968. He served three seasons as an assistant coach before taking over as head coach in 1971.

Now, just like that, Nichay finds himself in charge.

Since Robinson missed two games during the 2017-18 season and 12 more outings last season, Nichay has experienced several dress rehearsals as the guy at the end of the bench making the final in-game decisions. In fact, he’s assembled a 10-4 mark.

“I’m excited. It’s exciting,” said Nichay, a 2009 Rutgers grad who grew up in Denville, N.J. “It’s a great place. We get tremendous student-athletes to work with. They’re guys that are motivated. They want to do well in school, they want to get a great job, but, at the same time, we were able to attract, because of what Coach built her, some really motivated basketball players that want to compete at a really high level and put in a lot of time and be a part of something that’s special and bigger than the individual.

“It’s a great situation and I’m obviously not taking lightly what I’ve been tasked to do.”

Particularly since York will roll into the refurbished Mayser Center — the Philadelphia 76ers held training camps there for years — with a solid nucleus in place featuring Jared Wagner, Darin Gordon and Joe Polczynski that last season fueled a 22-8 run that ended with a second consecutive NCAA Tournament appearance.

Conversely, F&M returns Justin Kupa, Matt Redhead, Les Thomas, Ignas Slyka and Mike Rice and a number of others from a squad that last season finished 15-11 and reached the Centennial Conference playoffs. Kupa and Redhead averaged 10-plus ppg.

“Because of what Coach has built, you’re going to get everybody’s best shot,” Nichay said of a Diplomats group that is picked to finish fourth in the Centennial. “We had a lot of close games, some that we came out on the right side of and others that we didn’t. Add that experience to this year — and a lot of these guys are improved — hopefully a lot of those close games flip over to where we’re coming out of them with a win.”

Yet while Robinson’s presence won’t be seen on the bench during games or on the Mayser Center floor during practice sessions, it definitely will be felt.

You don’t win 967 college basketball games and not leave a lasting legacy.

“I’m really appreciative of that and he’s been great even now, all the way up to today,” Nichay continued. “He’s a coach, a teacher, a leader at heart. That’s what he does and he’s just a terrific, terrific mentor.”