The Philadelphia Catholic League, Inter-Ac League, Friends' School League, and various public school leagues in the surrounding Philadelphia suburbs have been churning out Division I hoops talent for a long time, and there's no signs of slowing. There are more than 85 current scholarship Division I players from the immediate Philadelphia area, not counting those from  Jersey, the Lehigh Valley, and Harrisburg/District 3 regions.

In fact, there's so many local kids playing D-I hoops, we've had to split the roundup into four parts. Here's the second of four below, featuring kids from the immediate Philadelphia area and a couple from juuuust over the bridge in South Jersey.

Stevie Jordan (Sr./Rider)
Ever since he arrived at Rider, Jordan has been a huge part of the Broncs program, playing in 90 games (84 starts) and averaging more than 30 minutes each season, with similar stats all four years (12.3 ppg, 5.3 apg, 3.8 rpg for his career). He enters his senior year with 1,107 points, which puts him in position to finish his career in the top 10 on the Broncs’ all-time list; he’s already 5th in assists (475), and should take the record from Deon Hames (198) just by matching his career-low in assists (4.4/game). 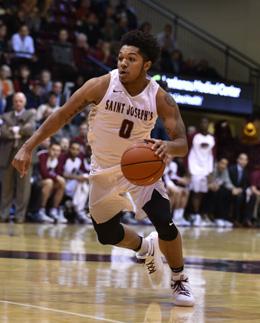 Lamarr Kimble (R-Sr./Louisville)
“Fresh” Kimble is a different type of bird this season, finishing his college career as a grad student for the Cardinals after spending the past four years at St. Joe’s. The 6-0 point guard out of Neumann-Goretti has been a leading scorer (15.6 ppg last year), a primary point guard (3.2 apg for his career) and played in 84 career games with 43 starts, though he’s dealt with injuries –– namely, a foot injury that cost him the better part of two seasons. Now he gets to show his stuff in the ACC.

Konrad Kiszka (Fr./Princeton)
A truly versatile athlete, Kiszka starred on the court in two different ways at La Salle High School, playing a starting role for the Explorers for most of his high school career, while also starting on the school’s strong indoor volleyball team. A 6-7, 195-pound wing forward, Kiszka played the ‘3’ and ‘4’ for the Explorers, where he has the ability to play above the rim and he’s also a good outside shooter.

Chereef Knox (Fr./Saint Joseph’s)
The second of four 2019 Imhotep Charter grads on the list is Knox, a 6-5, 210-pound wing forward who elected to stay local for college after recent hire Billy Lange extended him an offer this spring. Knox, who helped the Panthers stay undefeated at home during his four years at Imhotep, is a bit of a do-everything player who doesn’t have one singular strength, but he’ll get run in a few different positions.

Matiss Kulackovskis (R-Soph./Bowling Green)
Kulackovskis is back to full strength after missing his first season in college with a knee injury, then working his way back to come off the bench in 17 games a season ago, topping out at 16 minutes and 10 points, albeit in different games. The 6-9 forward out of Lithuania, who played at Archbishop Ryan, has the ability to stretch the floor out to the 3-point arc and had good mobility back in high school.

Seth Lundy (Fr./Penn State)
One of the most versatile wings around in the 2019 class, Lundy now gets to Penn State, where he’ll serve as the understudy for a Nittany Lions star we’ll get to later on down this list for a year before he’ll be expected to shoulder a heavy load. That said, the 6-6, 210-pounder from Roman Catholic is talented enough to earn minutes at the ‘2,’ ‘3,’ and ‘4’ for the Nittany Lions right away, with his ability to stretch the floor, a good nose for the glass and defensive versatility. Sound familiar?

Xzavier Malone-Key (R-Jr./Fairleigh Dickinson)
Maloney-Key, a 6-4 wing guard out of Plymouth-Whitemarsh, had a quiet freshman season at Rider, scoring less than a point per game in 23 appearances. He then transferred to FDU, where he made quite an impact in his first year of eligibility this past season, averaging 11.4 ppg and 3.9 rpg, shooting 44.7 percent overall and a solid 35.9 percent from the 3-point line. He’ll be a major contributor yet again for a program coming off a 21-win season and NCAA Tournament appearance.

Zane Martin (R-Jr./New Mexico)
Martin spent his first two collegiate years at Towson, where he went from a solid reserve as a freshman (5.5 ppg) to a star as a sophomore, averaging 19.8 ppg, 3.5 rpg and 2.7 apg, shooting better than 45 percent overall and 38 percent from 3. Then he made the decision to leave the Tigers and head to New Mexico, where he’ll play this season for the Lobos after sitting out the 2018-19 campaign.

Tyere Marshall (Sr./Rider)
The Broncs’ starting big man each of the past two seasons, Marshall averaged 10.8 ppg and 6.6 rpg as a junior, though a deep rotation means he only plays about 23 mpg. A 6-9, 240-pound center out of Martin Luther King, Marshall has played in 93 games in his Broncs career (61 starts), starting 58 of 62 games over the last two years. Broncs have had three winning seasons in a row, now they’re searching for the NCAAs.

Kyle McCloskey (Soph./Penn State)
McCloskey’s college career has taken a sharp left-hand turn, after the Villanova football recruit decided to transfer to Penn State and switch sports entirely, not an easy call at the high-major Division I level. But McCloskey, a two-sport star at GA, got run in 11 games during the second half of last season after finishing his transfer year out, scoring a total of 14 points. A 6-5 lefty, McCloskey will have to fight for time in a crowded backcourt, but he could contribute eventually.

LaPri McCray-Pace (Jr./Morgan State)
A physical combo wing out of Conwell-Egan, McCray-Pace was a key member of the Eagles’ 2015 state championship run, then did a prep year at Putnam Science Academy (Conn.) after his graduation from C-E. Through his first two years at Morgan State, McCray-Pace has played in 56 games with 18 starts, averaging 4.4 ppg and 2.4 rpg.

Will McNair (R-Fr./New Mexico State)
A late-blooming big man, McNair is a physical presence in the post at 6-10 and 265 pounds, having refined his body during his redshirt season at NMSU. He comes to New Mexico by way of Martin Luther King HS, and joins a program off a 30-5 season including a WAC Championship, though they lost by one to Auburn in the first round of the NCAAs. The Aggies generally played small last season, so it’ll be interesting to see how McNair figures into their plans.

Lucas Monroe (Fr./Penn)
The only one of five Quakers freshmen who’s from the area, Monroe has as good a shot to play as any of them. A 6-6, 200-pound, left-handed point guard, Monroe was a four-year starter at Abington, where he was part of the most dominant dynasty in Galloping Ghosts history, including three District 1 6A championships, alongside ‘Nova freshman Eric Dixon. He’ll need to improve his outside shooting, but his IQ and size for position are a big plus. 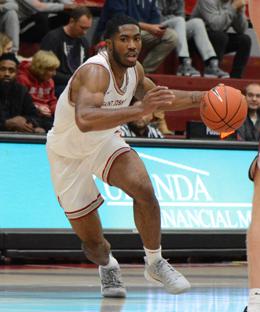 Rahmir Moore (above) is a Philly native though he spent his last two years of high school in Canada. (Photo: Josh Verlin/CoBL)

Rahmir Moore (Fr./Saint Joseph’s)
Moore, a Philadelphia native, comes to St. Joe’s after spending his last two years at RISE Prep (Ont.), though he was previously at Mastery Charter. His half-brother is former Temple star Ramone Moore, but the most famous member of the family is his brother-in-law, Toronto Raptors star Kyle Lowry. Moore, a 6-3, 205-pound combo guard, will have to play right away as part of a shorthanded Hawks’ squad, where he can play either backcourt position.

Makhi Morris (Jr./Abilene Christian)
A solid scoring wing in his high school days at now-closed Delaware Valley Charter, Morris spent the last two years at the JUCO levels. As a sophomore at Cochise (Ariz.), the 6-3, 184-pound wing guard averaged 17.9 ppg and 3.8 rpg, shooting 45.1 percent overall and 36.5 percent from 3. That earned him a D-I scholarship to Abilene Christian, which is in its seventh year as a D-I program after transitioning up from D-II.

Justyn Mutts (R-Soph./Delaware)
Mutts began his college time at High Point, where he played in 28 games as a freshman with 19 starts, averaging 6.0 ppg and 4.0 rpg. But the St. Augustine Prep (N.J.) transferred to be closer to home, and after sitting out a year at Delaware, he’s ready to take the court for the Blue Hens. A bouncy 6-7 combo forward, Mutts is one of two UDel frontcourt transfers who sat last season out and are now eligible, along with ‘Nova import Dylan Painter.

Sa’eed Nelson (Sr./American)
A 5-9 guard from St. Augustine Prep, Nelson will go down as one of the best players ever in American University basketball history. Through his first three seasons, in which he’s started all 89 games, he’s averaged 17.8 ppg, 4.5 rpg, and 4.3 apg; as a junior, he put up 19.8 ppg, 5.6 rpg and 5.2 apg, earning First Team All-League honors for doing so. Nelson enters his senior season 420 points from 2,000

Jameer Nelson Jr. (Fr./George Washington)
The son of former St. Joe’s great Jameer Nelson was going to the Hawks, before the firing of Phil Martelli led him to re-opening his recruitment and going to George Washington, much to the delight of first-year head coach Jamion Christian. A late-blooming 6-1, 190-pound guard, Nelson Jr. is an athletic dynamo of a combo guard, which he proved in GW’s exhibition win the other night, scoring 20 points with six assists, shooting 5-of-7 from deep.

Paul Newman (Jr./Bucknell)
This is Newman’s time to shine, with the graduated Nate Sestina now at Kentucky for his final season. Over his first two seasons, Newman, a 6-9 forward out of Roman Catholic and a prep year at St. Andrew’s (R.I.), played in 53 games with two starts as a sophomore, averaging 3.7 ppg and 3.0 rpg in 12.8 mpg this past year. He’s shown the ability to put up numbers when he’s on the floor, and now he’ll have that chance to show what he can do.

Dean Noll (Soph./Cornell)
One of the best guards in Jersey during his years at Shawnee, Noll had a fairly quiet freshman year at Cornell, seeing action in 15 contests and scoring a total of 12 points. The Big Red had five seniors ast part of last year’s rotation, so there are certainly minutes up for grabs for Noll, a 6-2, 180-pound combo guard who can shoot the lights out and has a crafty floor game.

Jacob O’Connell (Fr./Princeton)
O’Connell is a still-young big man for a college freshman, a 6-11 center with a still-developing frame and game, and a four-year piece for the Tigers. The former St. Joe’s Prep center, who spent his first two high school years at Eastern Regional (N.J.), played this summer for the Slovakian U18 team in the FIBA European ‘B’ Championships, where he averaged 6.3 ppg and 6.0 rpg. Princeton has an experienced frontcourt this year, so it could be a season before O’Connell makes a big varsity impact.