The Philadelphia Catholic League, Inter-Ac League, Friends' School League, and various public school leagues in the surrounding Philadelphia suburbs have been churning out Division I hoops talent for a long time, and there's no signs of slowing. There are more than 85 current scholarship Division I players from the immediate Philadelphia area, not counting those from  Jersey, the Lehigh Valley, and Harrisburg/District 3 regions.

In fact, there's so many local kids playing D-I hoops, we've had to split the roundup into four parts. Here's the second of four below, featuring kids from the immediate Philadelphia area and a couple from juuuust over the bridge in South Jersey.

Mike DePersia (Fr./IUPUI)
While his twin brothers Rob and Nick just finished up standout careers at Rowan –– they combined to start 210 out of 211 games and score over 2400 points –– it’s time for the next DePersia brother to start his career for the Jaguars. The 5-11, 170-pound point guard led Haddonfield Memorial to back-to-back NJ Group 2 state titles as a junior and senior, scoring over 1,000 points and averaging 13 ppg as a senior. 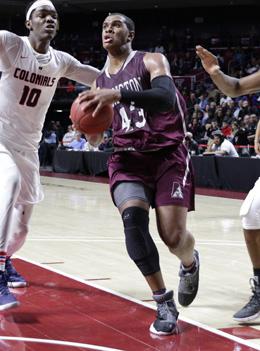 After a standout career at Abington, Eric Dixon (above, right) is now a freshman at national powerhouse Villanova. (Photo: Mark Jordan/CoBL)

Eric Dixon (Fr./Villanova)
At the beginning of his Abington career, Dixon was one of the brightest prospects in Galloping Ghosts history. By the time he left, he was undoubtedly the school’s best basketball player ever –– its first 2000-point scorer, the 6-8 lefty forward averaged 27.6 ppg as a senior, leading Abington to its third straight District 1 6A championship. He might not play a big role for Villanova this year, but the future is extremely bright for the talented big man with inside-out ability.

Samir Doughty (Sr./Auburn)
Doughty’s only going to be suiting up for his third season of college hoops, but after redshirting a year at VCU and then transferring after playing a season, this is his second and final year of eligibility for the Tigers. Last year, he played a valuable role for the Final Four squad, playing in 40 games (27 starts) and averaging 7.3 ppg and 3.5 rpg while shooting 42.5 percent from 3-point range. With the team’s three leading scorers all gone to the pros, the opportunity is there.

Malik Ellison (R-Sr./Hartford)
Similar to his fifth-year teammate Traci Carter, Ellison is hoping for a resurgent final year in college in his third different stop. The 6-6 wing and son of former NBA No. 1 draft selection Pervis Ellison played two years at St. John’s, averaging just over seven points each season, before transferring to Pitt. In one year with the Panthers, he played in 31 games (16 starts), averaging 5.8 ppg and 3.8 rpg.

Mark Flagg (Jr./St. Francis Pa.)
In his first two seasons for the Red Flash, Flagg has played in 64 games with 12 starts, averaging 6.2 ppg and 4.4 rpg for a program that’s gone 12-6 in the Northeast Conference each year. Though the 6-9 post player made his mark at Pennsbury for his ability to stretch the floor as well as score inside, he’s so far done most of his production inside the arc, attempting only 13 3-pointers (making three) thus far in his college career.

Jack Forrest (Fr./Columbia)
After a standout career at Lower Merion, Forrest is set to begin his college career for the Lions, bringing size (6-5) and floor-spacing ability to a Columbia squad which needs to replace the production of graduated guard Quinton Adlesh (team-high 65 3-pointers). Forrest scored over 1,200 points for the Aces and hit more than 40 percent of his 3-pointers, and the 2019 Central League MVP shouldn’t have much trouble adjusting to a deeper arc.

Andrew Funk (Soph./Bucknell)
After missing the first 12 3-point attempts of his college career, Funk went 34-of-86 (39.5 percent) from deep to finish out his freshman season, finishing his first year with the Bison averaging 4.7 ppg and 1.5 rpg. A likely candidate to slide into the starting spot voided by Kimbal Mackenzie’s graduation, the 6-4 guard out of Archbishop Wood is on pace to have an even better college career than he did for the Vikings, when he came off the bench until his senior year.

Tommy Funk (Sr./Army)
Ever since his very first college game, where he dished out five assists against one turnover in 33 minutes at Oregon, Funk has shown that he’s one of the best point guards not just in mid-major hoops, but all of Division I. Andrew’s older brother, also a Wood grad, enters his senior year with a school-record 516 assists (5.5/game), putting him within reach of the Patriot League all-time record (Lehigh’s Kahron Ross, 660). Averaged 12.6 ppg, 5.9 apg and 3.9 rpg as a junior. Has started in all 94 games the Black Knights have played during that time.

Jalen Gaffney (Fr./UConn)
A New Jersey native who played his final three years of high school ball at the Westtown School, Gaffney is a talented lead guard who will play one year with UConn in the AAC before the Huskies’ program moves over to the Big East. A 6-2, 175-pound guard, Gaffney is a fluid athlete and 3-level scorer who also knows how to run an offense and set up his teammates, like a quintessential modern guard. UConn has an experienced backcourt, so expect Gaffney to play reserve minutes at first.

Collin Gillespie (Jr./Villanova)
Yet another Archbishop Wood guard in the list, Gillespie is certainly the best of the Viking bunch –– at least, for the time being. Villanova’s starting point guard and unquestioned leader averaged 10.9 ppg, 2.8 apg and 2.4 rpg as a sophomore alongside Phil Booth in the backcourt. Now the ball will be in his hands a majority of the time, but that shouldn’t be a problem for the 6-3 guard who’s known as one of the hardest workers around –– at least, once he gets used to the mask he’ll have to wear due to a preseason broken nose. 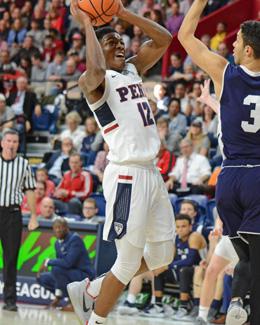 Penn's Devon Goodman (above) was one of the city's breakout stars a year ago. (Photo: Mark Jordan/CoBL)

Devon Goodman (Sr./Penn)
A speedy 5-11 guard out of Germantown Academy, Goodman played a key reserve role for Penn for most of his first two seasons, never enough of an outside threat (22-of-89, .247) during that span to earn regular time. But that changed as a junior, when Goodman started 29 of 31 games, averaging 13.9 ppg, 3.3 rpg and 2.3 apg –– and most impressively, shooting 37.5 percent from deep. As a senior he’ll be counted on as one of the team’s top offensive options.

Quade Green (Jr./Washington)
The former Neumann-Goretti standout was granted eligibility for this entire season, after transferring from Kentucky midway through the 2018-19 campaign. Green, a 6-0 point guard, played in 43 games with 13 starts for John Calipari at UK, averaging 9.0 ppg and 2.6 apg while shooting 38.5 percent from deep, though after starting 13 games as a freshman he hadn’t started any of the first nine as a sophomore. He’s still an immensely talented lead guard who can score in a multitude of ways.

John Harrar (Jr./Penn State)
Harrar started 18 of 32 games for the Nittany Lions as a sophomore, but he looks primed to move into the starting lineup full-time as a junior. A 6-9, 240-pound forward out of Strath Haven, Harrar has always been a physical presence in the post, with a nice face-up game out to 18 feet. Last year, he averaged 3.4 ppg and 3.6 rpg, leading the team with a 55.1 percent conversion rate from the floor.

Hakim Hart (Fr./Maryland)
The first of two local freshmen on the Terps’ roster, Hart is a 6-6 guard out of Roman Catholic. After lighting up the nets at Kingsway (N.J.) for two seasons, he came to the Catholic League and turned from a 3-point shooter into a complete guard, averaging 21.1 ppg, 6.7 rpg, 4.0 apg and 1.8 apg as a senior, helping the Cahillites capture their second consecutive PCL title. The Terps are deep at guard, but Hart’s going to be a very good piece for them over the next few years.

Tariq Ingraham (Fr./Wake Forest)
Ingraham’s first season in college will be spent watching from the sidelines, as Wake Forest announced the former Bonner big man tore his Achilles tendon in practice late in October. A powerful 6-9 forward, Ingraham averaged 15 points and 10 rebounds in his senior season.

Christian Ings (Fr./Rider)
Just like most of the rest of its roster, Rider went into Philly for its entire three-man class. Ings, a bouncy lead guard out of Neumann-Goretti, is the first on our list. At 6-2 and 176 pounds, Ings played a hybrid point/scorer role for the Saints. How much he plays at first will depend on his ability to defend and shoot, because the Broncs have other players at his position. Might take him a year or two to really break through.

Justin Jaworski (Jr./Lafayette)
The Pride of Perkiomen Valley, Jaworski is quickly turning into one of the best guards at Lafayette in recent memory. He averaged a team-high 14.6 ppg as a sophomore as one of the most efficient shooters in the country, hitting 53.8 percent of his 2-point attempts and 48.9 percent from deep, plug 86.4 percent from the line. The 6-2, 194-pound guard enters his junior season 248 points from 1,000, and should continue bombing away against the Patriot League.

Ajiri Johnson (Soph./Rider)
In his first season at Rider, Johnson played in 25 games, including a trio of starts in December, but mostly came off the bench for usually between four and 15 minutes per outing. The bouncy 6-8 forward out of Bonner-Prendergast averaged 2.8 ppg and 1.6 rpg, making 56.5 percent of his shot attempts (26-of-46) on the season. With the same frontcourt back on the roster, it’s unlikely Johnson’s role will grow too much this year.

Cameron Jones (R-Sr./Saint Peter’s)
Jones has had an interesting few years at Saint Peter’s. He played in 30 games as a true freshman in 2015-16, averaging 4.7 ppg. Then he voluntarily redshirted the next year due to a roster glut at shooting guard, to save his eligibility. He played in 32 games as a redshirt sophomore two years ago, averaging 6.1 ppg and 2.6 rpg off the bench. Last year he was off to a great start, averaging 9.1 ppg and shooting 45.5 percent from deep, but an injury after eight games ended his year early.