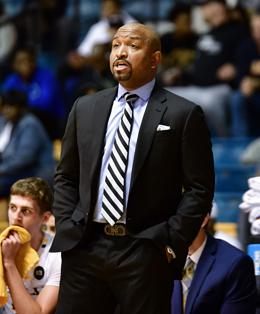 The final exhibition game in the run-up to the 2019-20 season –– at least, from a local perspective –– saw host La Salle fight from behind multiple times to finally top off its Division II opponent, West Chester, 70-63. Below, you’ll find some stats, some quotes, some notes, and various other thoughts from the afternoon. Click here for a photo gallery.

To Panic, Or Not to Panic, That is the Question

For La Salle fans, anyways. Any time a Division I program, especially one in a mid-major league like the Atlantic 10, has a close call (or loses to, which we’ve seen with some regularity) with a small-college opponent, there’s always those who wonder just how seriously to take the result.

The answer: not too seriously. These games are generally a chance for the visitors to strut their stuff against a D-I program, while for the hosts it’s mostly about trying to stay healthy.

La Salle is young (we’ll get to that in a minute), and a game that doesn’t count only gets so realistic in terms of simulating a true gameday atmosphere. Even though the Explorers closed last season winning seven of their last 13 regular-season games, the mix of new faces means the rebuilding project is still very much on. Things will be much different a week later, when Iona visits Tom Gola Arena for the first official game of the Explorers’ 2019-20 season.

Don’t get me wrong, West Chester’s a quality program: the Golden Rams won 22 games last year, and have one of the best scorers around in senior Malik Jackson, part of a deep and talented backcourt which will power Damien Blair’s squad towards another run at the Pennsylvania State Athletic Conference (PSAC) championship. They’ll play plenty of important games come February and March, especially if some talented underclassmen play up to potential.

There’s certainly a bit of an eye-opener for a young team going down 24-12 at home to a D-II opponent, and it’s a credit to La Salle that they rallied through a tough game for a win. But besides some individual takeaways, there’s not too much to be read from a seven-point exhibition result.

“We learned that we can never be satisfied, and we learned that we need each other to win,” said junior guard David Beatty, who had a game-high 19 points for La Salle in the win. “Sometimes when we go off and do our own thing, do our own concepts, things like that, it brings the team down, and I think we just realized we have to come together and just be together in order to play our game and win the game.”

Five players who were wearing a La Salle uniform for the first time, including four freshmen and a now-eligible transfer, played their first game in an Explorers uniform that wasn’t a “secret” scrimmage. All five look like they’ll be part of the Explorers’ top eight in the rotation, and each played at least 18 minutes on Saturday, so their level of play will be a major part of how the Explorers fare this season. Here’s how each of the five fared:

“He defends, he rebounds, he plays hard, he’s unselfish, he’s a hard worker...he’s everything that I want a La Salle Explorer to be, and I’m excited to have him in our program,” head coach Ashley Howard said. “I know he didn’t have a great game today, but you know what, I’ve got all the confidence in the world that Christian is going to have a great career here.”

The Explorers do have that week until their first regular-season game, hosting the always-potent MAAC squad. After that, it’s two tough Big 5 games against Penn and Temple, meaning La Salle doesn’t have too much feeling-out time for its freshmen if it wants to compete for the city title this year.

“For us, it’s all about Iona, just take care of business,” Howard said. “When we get to the Big 5 games, we’ll get to them, [but] we don’t want to look past Iona and start thinking about the Big 5 games. Iona’s a great program, NCAA Tournament caliber program...they’re going to come in here with an edge.” 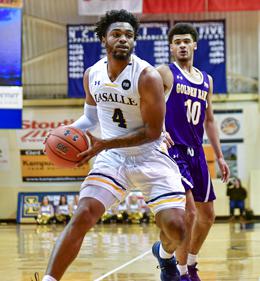 Sherif Kenney (above) is one of two freshmen who will be handling the point guard duties this season. (Photo: Mark Jordan/CoBL)

Focus on the New Point Guards
While Ray will arguably be the building block of the La Salle program moving forward, he won’t be the Explorers’ primary ball-handler, at least not for the first few years of his collegiate years. Instead, it’ll be two of his classmates, Hikim and Kenney, who will spend most of the time running point for Howard.

The two are very different guards: Kenney is 6-5 and north of 220 pounds, with the body of a strong wing, but he’s certainly very confident and capable with the ball in his hands. Hikim is only 6-0, a speedster who can get to the rim.

“Sherif is a big guard who can score and facilitate; Ayinde is more of a pitbull, he can really disrupt you defensively, he’s quick with the ball, he can get in the lane, he sees the floor,” Howard said. “They’re equally as effective, but they’re very different. And I think this year’s going to be great for both of them, because they’re both going to get a lot of valuable experience this year.”

Kenney and Hikim spent some time on the court together, though more often than not it was one of the two out on the court with a constantly rotating cast around them. In addition to the scoring differential, La Salle also outscored West Chester by nine with Kenney on the floor, while West Chester outscored the Explorers by 17 when Hikim was on the court.

“At this stage, we’re looking for guys who are going to bring a defensive mindset to the floor, first,” Howard said. “Defense takes care of itself, we can get out in transition, we can get some easy baskets.

“We’ll look at the tape from this exhibition, we’ll revisit tape from our Princeton scrimmage and we’ll try to figure out what are the best combinations moving forward as we head into Iona.”

Extra Notes
-- La Salle sophomore Jack Clark will miss the entire season due to complications from an ACL injury he initially suffered his senior year at Cheltenham. According to Howard, Clark’s initially surgery never healed correctly, as Clark was still in the middle of a growth spurt that took him from about 6-3 as a junior in high school to over 6-8 entering his second year in college. A second surgery should correct the problem, but it’ll mean he won’t take the court again until the 2020-21 season.

Also on the sidelines for the Explorers was grad transfer Moustapha Diagne, though Howard said the fifth-year forward’s knee injury isn’t nearly as serious. Diagne, who was ranked No. 58 by ESPN coming out of Pope John Paul XXIII (N.J.), has never been able to settle in during his college years, going from a Syracuse commit but never enrolling to Northwest Florida State JUCO to Western Kentucky and now to La Salle, where he’s got one final year of eligibility.

-- Freshman guard Robbie Heath (Abington HS, Pa.) led West Chester with 16 points, hitting 5-of-11 from the floor and 2-of-7 from 3-point range. Malik Jackson hit 3-of-6 from downtown to help him to 14 points. Freshman Kyle McGee, who like Heath started in his first collegiate appearance, got in foul trouble early but had a strong second half with four assists and no turnovers.

-- Going to be at West Chester on Friday for a doubleheader, with Kutztown playing Lincoln at 5:30 before the Rams play Claflin (S.C.) with a scheduled 7:30 tip. It’s the season opener for the D-II programs, and part of a PSAC vs. CIAA event. The teams will swap opponents for another set of games Saturday night.